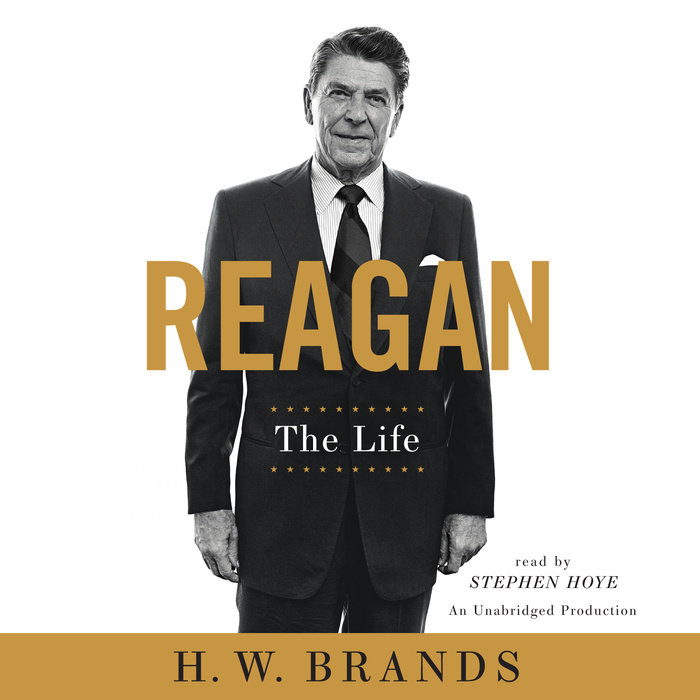 In his magisterial new biography, H. W. Brands brilliantly establishes Ronald Reagan as one of the two great presidents of the twentieth century, a true peer to Franklin Roosevelt. Reagan conveys with sweep and vigor how the confident force of Reagan’s personality and the unwavering nature of his beliefs enabled him to engineer a conservative revolution in American politics and play a crucial role in ending communism in the Soviet Union. Reagan shut down the age of liberalism, Brands shows, and ushered in the age of Reagan, whose defining principles are still powerfully felt today.
Reagan follows young Ronald Reagan as his ambition for ever larger stages compelled him to leave behind small-town Illinois to become first a radio announcer and then that quintessential public figure of modern America, a movie star. When his acting career stalled, his reinvention as the voice of The General Electric Theater on television made him an unlikely spokesman for corporate America. Then began Reagan’s improbable political ascension, starting in the 1960s, when he was first elected governor of California, and culminating in his election in 1980 as president of the United States.
Employing archival sources not available to previous biographers and drawing on dozens of interviews with surviving members of Reagan’s administration, Brands has crafted a richly detailed and fascinating narrative of the presidential years. He offers new insights into Reagan’s remote management style and fractious West Wing staff, his deft handling of public sentiment to transform the tax code, and his deeply misunderstood relationship with Soviet leader Mikhail Gorbachev, on which nothing less than the fate of the world turned.
Reagan is a storytelling triumph, an irresistible portrait of an underestimated politician whose pragmatic leadership and steadfast vision transformed the nation.
Read More
"H.W. Brands’ new biography tells the [Reagan] story as well as you could ask for in a single volume. A lucid and witty writer, Mr. Brands lays out the facts in short chapters that bounce along like one of the ‘bare-fisted walloping action’ films that Reagan once starred in. He has a talent for letting his sources speak for themselves ... Illuminating. Mr. Brands recounts Reagan’s triumphs and the scandals even-handedly."
—The Economist

"Reagan is an engaging study of a man who Brands says defeated Soviet communism and achieved a halfway economic revolution. Drawing on Reagan’s diary, speeches, statements, letters and memoirs, and on interviews with the president’s aides, Brands tells a briskly paced story ... Reagan’s legacy continues to fuel the ideas and frame the choices facing his would-be successors, and this astute biography is further evidence that the 40th president continues to cast a long shadow over a still largely conservative political order."
—Washington Post

"Brands is the rare academic historian who can write like a best-selling novelist. Through meticulous research, he recreates decades-old dialogue and puts the reader inside the Oval Office, the Cabinet Room and the house in Reykjavík, Iceland where Reagan and Soviet leader Mikhail Gorbachev debated the fate of the world and laid the groundwork for the end of the Cold War."
—USA Today

"Superb ... it is hard to imagine a biography of Ronald Reagan that could be more thorough, evenhanded and insightful."
—Dallas Morning News

"A lively and lucid narrative of the life of America’s 40th president ... Brands is surely right that Reagan was the most persuasive political communicator since Roosevelt."
—San Francisco Chronicle

"Brands’ judicious biography of Ronald Reagan is as much about the art of governing as about the man himself ... Reagan emerges as a great but terribly flawed president who managed to reorient government priorities after the exhaustion of liberal administrations and ideas, but one who also burdened the country with enormous debts that his successors had to pay down."
—Minneapolis Star Tribune

"Brands' work draws richly from Reagan's presidential diaries and other recently released sources that earlier biographers couldn't tap ... His history of the important meetings with Soviet leader Mikhail Gorbachev is detailed and balanced, with the views of both sides given equal weight. These chapters are Brands' best writing, reinforcing the significance of those arms-reduction efforts and both men's insistence on ending the threat of nuclear weapons."
—Philadelphia Inquirer

"Brands’ book stands out in the canon of works on Reagan ... With an expert’s talent for synthesizing earlier works, access to previously unavailable sources and new interviews, Brands creates a riveting narrative. His prose flows as smoothly as his subject’s speeches, and his insights provide a fresh look at a transformative president that celebrates his accomplishments but never ignores his blunders. A brilliant example of the biographer’s craft, Reagan deftly and boldly provides a balanced portrait of a man whose personality remains elusive but whose legacy continues to resonate."
—Richmond Times-Dispatch

"Readers will be greatly attracted to Brands' skills as a narrative historian ... [he] delivers high drama in treating Reagan's handling of diplomatic affairs, tensions with the press corps and squabbles with Congress. Few American historians and biographers can compete with Brands as a powerful historical storyteller. Make no mistake, this is a first-rate presidential biography ... The definitive biography of Reagan."
—The Oregonian

"Brands is an immensely talented writer ... [Reagan] is a pleasurable read."
—The Daily Beast

"A keenly researched book, filled with fascinating stories about a young man who escaped Illinois and an alcoholic father to pursue a dream of fame in Hollywood, eventually playing the role of his life as the leader of the free world."
—Tampa Bay Times

"Monumental life of the president whom some worship and some despise—with Brands providing plenty of justification for both reactions ... An exemplary work of history."
—Kirkus Reviews (starred review)

“A superb biographer writing at the top of his game has found the perfect subject for his narrative skills and profound understanding of the American presidency. Over the years H. W. Brands has produced an extraordinary body of historical and biographical works. This is his masterpiece.”
—Doris Kearns Goodwin, Pulitzer Prize-winning author of The Bully Pulpit

“With characteristic skill and insight, H. W. Brands has painted a compelling portrait of a ubiquitous yet still-misunderstood American. From the Midwest to Hollywood to the pinnacle of power, Reagan was at once enigmatic and effective. Read this great new book to see why.”
—Jon Meacham, Pulitzer Prize-winning author of Thomas Jefferson

"A superb American historian has brought us a fascinating, judicious, original, and concise biography of one of the most important presidents in American history. It is impossible to understand the late twentieth century without understanding Ronald Reagan, and H. W. Brands here addresses an impressive range of the key mysteries of the fortieth president's epoch and life."
—Michael Beschloss, author of Presidential Courage

“Ronald Reagan understood what was best about America, and expected the best for it—which is why he led it so successfully. In Reagan, H. W. Brands expresses, with deep, deft, strokes, what will become the accepted view of a great man.”
—Richard Brookhiser, author of Founders’ Son: A Life of Abraham Lincoln

“No one loved a good story better than Ronald Reagan. His own story—synonymous with the American Century and reflected in his political evolution from New Deal Democrat to Washington-phobic conservative—has never been told better. Studded with fresh insights, empathetic and yet constructively critical, it may well be H. W. Brands’s finest book. Certainly it confirms Reagan’s place as the conservative FDR, a transforming leader whose influence on his country’s politics and governance is arguably greater than the day he left the White House.”
—Richard Norton Smith, author of On His Own Terms: A Life of Nelson Rockefeller

“National treasure H. W. Brands, who gave us the definitive single-volume biography of Franklin D. Roosevelt, completes his biographical tour d'horizon of twentieth-century politics with this superb life of Ronald Reagan. In doing so, Brands tracks the paths we wandered through the depression and the Second World War, the battle against communism, and the conservative revolution. How did we get to today’s angry, polarized nation? Read Brands’s life of Reagan, and find out.”
—John A. Farrell, author of Clarence Darrow and Tip O’Neill and the Democratic Century
Read More