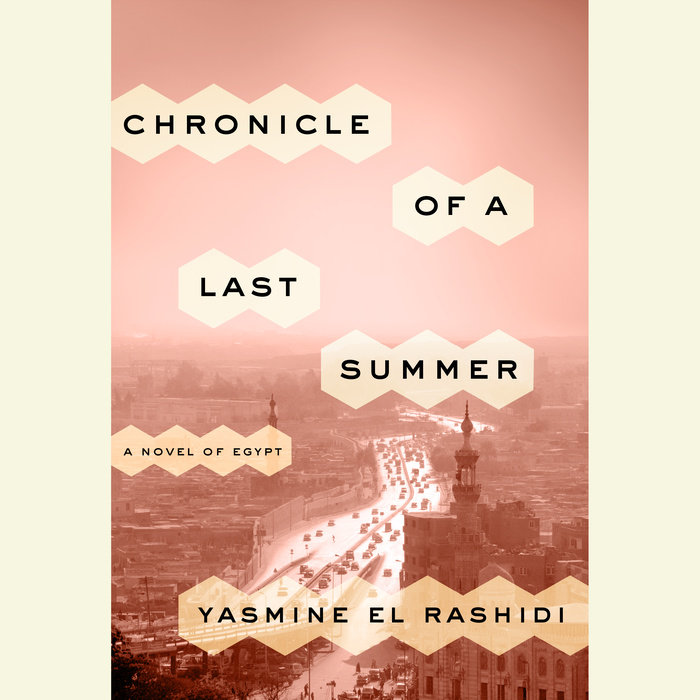 Cairo, 1984. A blisteringly hot summer. A young girl in a sprawling family house. Her days pass quietly: listening to a mother’s phone conversations, looking at the Nile from a bedroom window, watching the three state-sanctioned TV stations with the volume off, daydreaming about other lives. Underlying this claustrophobic routine is mystery and loss. Relatives mutter darkly about the newly-appointed President Mubarak. Everyone talks with melancholy about the past. People disappear overnight. Her own father has left, too—why, or to where, no one will say.

We meet her across three decades, from youth to adulthood: As a six-year old absorbing the world around her, filled with questions she can’t ask; as a college student and aspiring filmmaker pre-occupied with love, language, and the repression that surrounds her; and then later, in the turbulent aftermath of Mubarak’s overthrow, as a writer exploring her own past. Reunited with her father, she wonders about the silences that have marked and shaped her life.

At once a mapping of a city in transformation and a story about the shifting realities and fates of a single Egyptian family, Yasmine El Rashidi’s Chronicle of a Last Summer traces the fine line between survival and complicity, exploring the conscience of a generation raised in silence.
Read More
Longlisted for the 2017 PEN Open Book Award

“An eloquent first novel. . . . El Rashidi’s portrait of the unrest in her country is brutally vivid.” —The New York Times

“A wonderfully observed novel of personal awakening and politics in Cairo.” —The Washington Post

“Beautiful. . . . Illuminating. . . . Chronicle of a Last Summer’s casual, almost offhand form conceals an impressive density of observation. El Rashidi has a great deal to say about the cycles of thawra—revolution—and reaction in modern Egyptian life, and the way those cycles are circumscribed by the larger wheels of family and tradition.” —Robert F. Worth, London Review of Books


“El Rashidi finely conjures the world through a child’s eyes, with the abruptness and surreality of that perspective. . . . The novel is rich in its quiet implications. . . . An entire nuanced world emanates from these apparently offhand recollections. . . . Chronicle of a Last Summer wastes no words. Every sentence has meaning. . . . In El Rashidi’s novel, as in life, the familial and the societal are ultimately inseparable.” —Claire Messud, The New York Review of Books

"A remarkably clear, generous, and elegant reading of metropolitan life in Cairo. Yasmine El Rashidi has an extraordinary eye for detail: on the streets of Cairo, at school, at home, in the realm of politics, she captures everything and in the process gives one of the most uncannily clairvoyant and astute portrayals of today’s Egypt. The streets are exceptionally dirty, life can be stultifying, cruel, and unsafe, the buildings couldn’t be uglier, and the secret police lies in wait just about everywhere. Rashidi has always been unsparing in her frequent bulletins about the Arab Spring and its aftermath in The New York Review of Books. Here she is no less penetrating, though this also happens to be a moving and lyrical account of a young woman’s maturation from early girlhood, through adolescence, and adulthood​." —André Aciman, author of Harvard Square

“Yasmine El Rashidi's debut is politically minded, but with a beating heart at its core—a beautiful alchemy between an achingly human coming-of-age story and a political examination of a country with a deep, nuanced history.” —ELLE

"A moving and memorable portrait of a girl growing up under a repressive regime, struggling with its imposed silences, and finding her voice. In clear and elegant prose, Chronicle of a Last Summer probes the space in which the personal and the political meet and, at times, collide." —Laila Lalami, author of The Moor’s Account

“A moving novel about a woman’s coming of age in a country that tried to silence her.” —Travel + Leisure

"An elegant snapshot of how one life is lived within the historical storm." —Eimear McBride, author of A Girl Is a Half-formed Thing

"El Rashidi is a sculptor of language, using words and silence to examine some of our most profound questions about love, family, and the cost of freedom. Chronicle of a Last Summer is more than a story about a young woman's life, it is a testament to the stubborn endurance of hope. Read this beautiful book not to better understand a nation, but to discover a new vocabulary with which to comprehend our complicated human condition." —Maaza Mengiste, author of Beneath the Lion’s Gaze

“El Rashidi paints a landscape of life growing up in Cairo that feels so vivid and all-consuming that the reader could simply melt into the narrator and be present. Any American reader who’s felt that news stories, like those about Egypt’s 2011 revolution and what’s followed, seem distant and baffling will finish Chronicle of a Last Summer with a new depth of empathy and understanding.” —The Huffington Post

“Chronicle of a Last Summer offers a window on ordinary Egyptian life—both personal and political—across the decades, haunted by the ghosts of the dead and the missing.” —Newsday

“Chronicle of a Last Summer is an elegy for a city and a story of growing up submerged in other people's memories. There are novels that stay with you long after you turn the last page. This is one of them." —Daniel Alarcón

“Subtle, powerful. . . . Chronicle of a Last Summer sets itself against any absolutism: it refuses to subsume individual details into grand narratives, especially those promised by the heroic language of revolution.” —Kenyon Review

This Is The Author | Yasmine el Rashidi