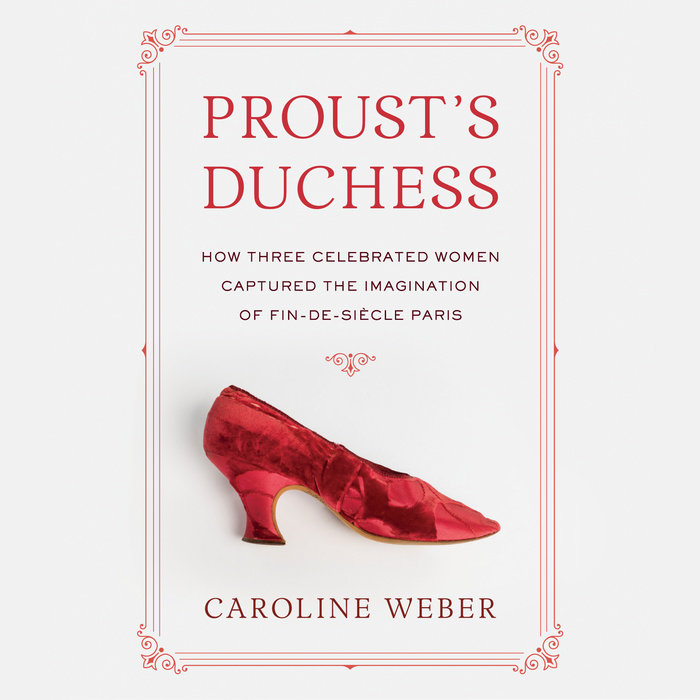 Geneviève Halévy Bizet Straus; Laure de Sade, Comtesse de Adhéaume de Chevigné; and Élisabeth de Riquet de Caraman-Chimay, the Comtesse Greffulhe--these were the three superstars of fin-de-siècle Parisian high society who, as Caroline Weber says, "transformed themselves, and were transformed by those around them, into living legends: paragons of elegance, nobility, and style." All well but unhappily married, these women sought freedom and fulfillment by reinventing themselves, between the 1870s and 1890s, as icons. At their fabled salons, they inspired the creativity of several generations of writers, visual artists, composers, designers, and journalists. Against a rich historical backdrop, Weber takes the reader into these women's daily lives of masked balls, hunts, dinners, court visits, nights at the opera or theater. But we see as well the loneliness, rigid social rules, and loveless, arranged marriages that constricted these women's lives. Proust, as a twenty-year-old law student in 1892, would worship them from afar, and later meet them and create his celebrated composite character for The Remembrance of Things Past.
Read More
“Proust’s Duchess is rich with intimate details of the extraordinary lives behind the carefully crafted public images of its three heroines. Celebrated names are dropped like confetti over the pages…. Ms. Weber has done a remarkable job of bringing to life a world of culture, glamour and privilege swept away by World War I.”
—Moira Hodgson, The Wall Street Journal

“A captivating triple biography…Focusing on three alluring women who were objects of Proust’s fascination, Weber portrays in rich detail a French aristocracy threatened by profound social and political change…Weber offers intimate details of their love affairs, betrayals, friendships, and rivalries; their worries over money and status…She recounts vividly the plush ambience, dress, and décor of their châteaux and palaces as well as the parties and salons peopled by royalty, artists, and writers who mesmerized the young, aspiring, impressionable Proust. A palpable, engrossing portrait of three extraordinary women and their tempestuous, fragile world.”
—Kirkus Reviews (starred review)

“Proust’s Duchess, Caroline Weber’s beguiling group biography of three aristocratic salonnières of Parisian high society in the Belle Époque… with sumptuous details, apt and amusing illustrations… and an enormous cast of the dandies, decadents, artists, writers, musicians and financiers… has succeeded much as [Proust] did in bringing that lost time back to glorious life.”
—Elaine Showalter, The New York Times

“The great strength of this literary history from Weber lies in its sheer accumulation of detail, which paints a granular picture of the ultra-wealthy milieu that provided the subject matter for Marcel Proust’s À la recherche du temps perdu...Weber reveals the darker side of a culture that contributed little to the larger society while spending lavishly on its own whims...The final impression is one of a topical warning against the accumulation of vast wealth for its own sake. Readers will be impressed when they reach the end of this lengthy book, nearly every page of which offers factual riches, served up with precise and witty prose.”
—Publishers Weekly

“This delicious feast of a book combines narrative flair, literary scholarship, original new material, a sharp, flamboyant eye for society and literature high and low, a style as elegant and playful as its subjects—three remarkable women in late 19th Century Paris who are accompanied onstage by a cast of writers, from Proust to Maupassant,  princes,  actresses, politicians, journalists, artists,  courtesans,  to create a superb, original  and irresistible study of a time and a place and the great art it created.”
—Simon Sebag Montefiore, author of The Romanovs and The Moscow Trilogy of Novels

“Better than Proust.”
—Cécile David-Weill, author of The Suitors and Crush

“Engrossing and intelligent… Proust’s Duchess skillfully guides readers through the heyday of fin-de-siècle France, unveiling its beauty and elegance, its cleverness and charm, but also its contradictions and inequities, its cruelty and wretchedness… Weber’s study has the feel of both a delicious guilty-pleasure read and a penetrating, clear-sighted piece of literary commentary.”
—Hollie Harder, The Yale Review

“Extraordinary… Proust’s Duchess [is] not only a serious work of scholarship but also a riveting triple biography of three rebellious women… the first 'it' girls, reinventing themselves as celebrities long before Instagram.”
—Lea Carpenter, Condé Nast Traveler

“One unending stream of quotable anecdotes…Weber’s book is a fascinating portrait of a segment of Parisian society, a wonderful slice of social history… It’s almost too good…One feels after reading Weber, for instance, that the actual model for the Duc de Guermantes was an even more theatrical and interesting character than the one Proust created.”
—Andrew Holleran, The Gay & Lesbian Review

“A tour de force… We are there, through Weber's masterful writing, at the grand masked balls of France… in the salons where conspiracies of Royalists against the recently arisen bourgeoisie are always enflamed… Bravo, Professor Weber, you have brought to life a wonderful recreation of a marvelous, scandalous, but above all unforgettable time.”
— John Davis, The Decatur Daily

“Caroline Weber has given us a meticulously researched, well written and generously illustrated book… a treasure trove of information both serious and entertaining… Weber deserves credit for filling gaps left by other scholars and biographers and indeed by Proust himself.”
—William C. Carter, The Paris Insider Newsletter

“Thanks to her astonishing, prize-worthy research, Caroline Weber knows more about the three real women Proust modelled the Duchesse de Guermantes on than the mythologizing Proust himself did. This is social history at its best.”
—Edmund White, author of Marcel Proust: A Life.


“A necessary companion for lovers of Proust's vast melancholy vision, Weber's equally vast social history explores the late 19th Parisian 'monde' of salons and masked balls, lit by the meticulous, mad obsession of its most elite residents to hold all the forces of the modern world at bay.”
—Tom Reiss, author of The Black Count: Glory, Revolution, Betrayal, and the Real Count of Monte Cristo