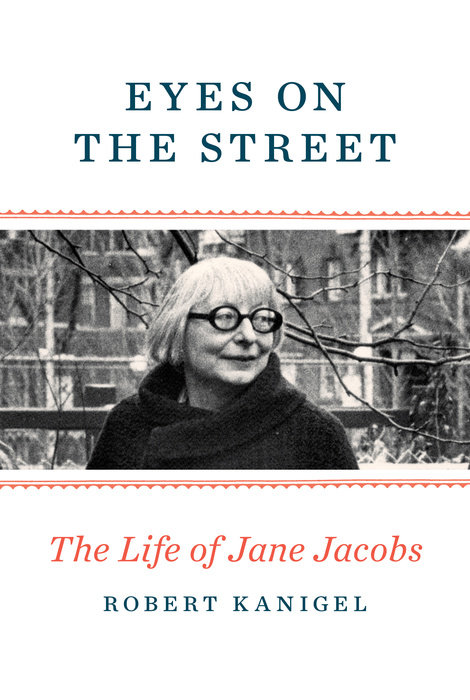 Written by: Robert Kanigel
Read by: Kimberly Farr
19 Hours and 20 Minutes Imprint: Random House Audio Genre: Biography & Autobiography - Women Release Date: September 20, 2016
The first major biography of the irrepressible woman who changed the way we view and live in cities, and whose influence can still be felt in any discussion of urban planning to this day.

Eyes on the Street is a revelation of the phenomenal woman who raised three children, wrote seven groundbreaking books, saved neighborhoods, stopped expressways, was arrested twice, and engaged at home and on the streets in thousands of debates--all of which she won. Here is the child who challenged her third-grade teacher; the high school poet; the journalist who honed her writing skills at Iron Age, Architectural Forum, Fortune, and other outlets, while amassing the knowledge she would draw upon to write her most famous book, The Death and Life of Great American Cities. Here, too, is the activist who helped lead an ultimately successful protest against Robert Moses's proposed expressway through her beloved Greenwich Village; and who, in order to keep her sons out of the Vietnam War, moved to Canada, where she became as well known and admired as she was in the United States.
Read More
“For those who never or barely knew [Jane], the book is a feast . . . A must-read for those interested in the making of perhaps the most unconventional of the influential minds of the 20th century . . . A good biography makes readers wish they had known the person; a great one makes them feel as though they did. In its careful but not lingering attention to tiny details and their context, this is a great one.” —Planning: The Journal of the American Planning Association

“Engrossing . . . Definitive . . . Excels in capturing the tone of Jane Jacobs’s life, how her straight-forward impatience with anything ‘stagnant’ and ‘dull’ ran like a thread throughout. Her warmth comes through too.” —Catherine Tumber, The American Prospect

“Kanigel’s book is sure-footed and even skeptical at times, and if he lapses into whimsicality now and then, skimming lightly over the surface of Jacobs’s ideas, he has offered something few others have in a crowded field: a new way of seeing this familiar, almost sainted figure. . . . Life, vitality, newness, constant becoming—these, Kanigel reveals, were the true subject of Jacobs’s most famous book—and of her life’s work.” —Samuel Zipp, n+1

"A powerful and all too rare biography of the making of a female public intellectual . . . It’s thrilling to read here about Jacobs’s public face-offs with minions of Robert Moses over the Lower Manhattan Expressway project; but, it’s just as thrilling to be privy to how she developed her thinking about how cities worked." —Maureen Corrigan, Fresh Air (NPR)

"The definitive Jacobs biography illuminating how her ideas rankled, spread and then garnered her such devotion . . . Kanigel’s book invites the question of how this woman who forced so many of us to see cities differently might help us interpret their state today, and whether she’s up to the task." —Emily Badger, The Washington Post

"Kanigel has found the right tone for his subject, light but serious." —Adam Gopnik, The New Yorker

"Mr. Kanigel tells this story well. [And he] does a fine job of describing the shock the book [The Death and Life of Great American Cities] caused. He also calls attention to insightful critiques, such as the one written by sociologist Herbert Gans." —John Buntin, Wall Street Journal

"Kanigel rightly tries to counter some of the deification around Jacobs’s cultural standing, leaving us with a work of wary appreciation that perhaps isn’t quite wary enough . . . [His] book invites the rest of us to keep debating." —Ginia Ballafante, The New York Times Book Review

“Kanigel records the twists and turns of Jacobs’s evolution from stenographer to author in a way that makes her evolution seem more inevitable than incredible . . . If you have any interest in Jane Jacobs, [read] this biography.” —James R. Kelly, America

“What you may not know about her—and what makes this book so enthralling—is that [Jane Jacobs] had a rebellious streak starting in third grade, got into debates everywhere she went, raised three children, and got arrested twice. What a character.” —Nashville Arts Magazine

"A well-researched, comprehensive portrait of Jacobs—one that is both reverent and realistic . . . It becomes expansive and fascinating as Jacobs moves through the city, beginning to observe the streets and people that would inform her later work." —Hilary Reid,  The Brooklyn Rail

"It’s a delight to discover the formation of personalities as powerful as Jacobs’s, and Eyes on the Street is chock-full of clues to her character." —Drake Baer, Science of Us

"A portrait emerges of an independent heroine who stepped into an arena dominated by men. She was Betty Friedan, Rachel Carson, and Erin Brockovich all rolled into one." —Anthony Flint, Boston Globe

"Eyes on the Street is the Jane Jacobs biography I’ve been waiting for." —Richard Florida, Citylab

"Kanigel has created what will likely become the definitive biography of Jane Jacobs in her centenary year. . . . Jane Jacobs was a woman in an overwhelming male field and lacked a planning degree, yet as Kanigel shows, she became and remains the most important urban visionary of our time." —Randy Shaw, Beyond Chron

"A first-rate in-depth appreciation of Jane Jacobs as one of the most influential intellectual figures of the 20th century. More of a personal story than an intellectual history, Kanigel brings this extraordinary woman to life while showing how her ideas unfolded, so that even readers unfamiliar with Jacobs and her work gain insights into how a curious and tenacious mind transformed both the ways we look at cities and our strategies of community activism." —Marilyn Gates, New York Journal of Books

“[A] first-rate story of one of the great independent thinkers of the 20th century . . . Kanigel handles her story with respect, humor, and scrupulous scholarship” —Shelf Awareness

"[Jane Jacobs] was great, and Kanigel gives her the great biography she deserves . . . Thanks to Eyes on the Street, we come to appreciate her intellectual development and professional achievements in all their fullness." —Edward Glaeser, The American Scholar

"Zestfully illuminating and entertaining . . . Kanigel’s delight in his subject, 'one of the premier intellectual figures of the twentieth century,' shimmers on every page . . . He takes full measure of [Jacobs’s] accomplishments and influence and elucidates the scope and passion of her unique quest to understand what sustains civilization." —Donna Seaman, Booklist

"Find out how an owlish thinker on a bicycle defeated the urban planner Robert Moses, saved Greenwich Village, and continues to shape your favorite American cities." —Esquire

"The author of The Death and Life of Great American Cities, which turned the world of city planning upside down, has become a cultural icon. Robert Kanigel’s compelling biography fleshes out a complicated and at the same time straightforward person: 'She worked hard; she finished what she started.'" —Witold Rybczynski

"Perceptive, informative, and a useful companion for readers of Jane Jacobs’s classic Death and Life of Great American Cities. It is also an inspirational story of a restless small town girl who heads to the big city with only her shorthand skills, but quickly transforms herself from secretary to journalist, to well-known architectural critic and then an internationally famous author." —Herbert Gans, author of The Levittowners and Imagining America in 2033

"Kanigel brings Jane Jacobs the woman to life. Jane—writer, activist, daughter, wife, mother—is beautifully profiled to give us deeper understanding of what it took to make a revolution in urban thinking and looking." —Lizabeth Cohen, author of A Consumers’ Republic: The Politics of Mass Consumption in Postwar America

"An outstanding chronicle of a provocative, influential, iconoclastic theorist of the American cityscape. . . . A well-rounded, illuminating narrative . . . a vast wealth of entertaining anecdotes highlighting Jacobs at her best (and worst) . . . A significant, comprehensive biography of an irrepressible urbanist, author, and pioneering community activist." —Kirkus Reviews (starred)

“Kanigel turns Jacobs’s life into a fascinating narrative with an endearing, obstinate, brilliant protagonist. Readers familiar with Jacobs’s work will enjoy reading the behind-the-scenes anecdotes from her career . . . and those who are learning about her for the first time will want to immediately pick up one (or all seven) of the books she wrote.” —Publishers Weekly (starred review)
Read More

10 Audiobooks About Notable Women in History