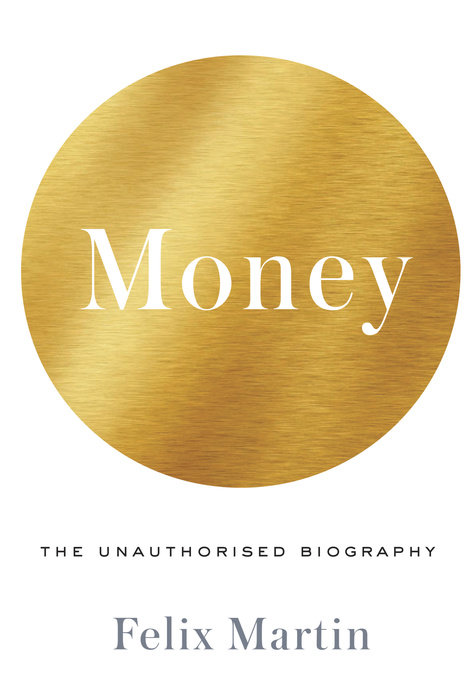 From ancient currency to Adam Smith, from the gold standard to shadow banking and the Great Recession: a sweeping historical epic that traces the development and evolution of one of humankind’s greatest inventions.

What is money, and how does it work? In this tour de force of political, cultural and economic history, Felix Martin challenges nothing less than our conventional understanding of money. He describes how the Western idea of money emerged from interactions between Mesopotamia and ancient Greece and was shaped over the centuries by tensions between sovereigns and the emerging middle classes. He explores the extraordinary diversity of the world’s monetary systems, from the Pacific island of Yap, where value was once measured by immovable stones, to the currency of today that exists solely on globally connected computer screens. Martin shows that money has always been a deeply political instrument, and that it is our failure to remember this that led to the crisis in our financial system and so to the Great Recession. He concludes with practical solutions to our current pressing, money-based problems.

Money skips nimbly among such far-ranging topics as John Locke’s disastrous excursion into economic policy, Montesquieu’s faith in finance to discipline the power of kings, the social organization of ancient Sparta and the Soviet Union’s ill-fated attempt to abolish money and banking altogether. Throughout, Martin makes vivid sense of a chaotic and sometimes incoherent system—the everyday currency that we all share—in the clearest and most stimulating terms. This is a magisterial work of history and economics, with profound implications for the world today.

"'Money is often held to have arisen as a solution to the shortcomings of barter: traders needed a universally acceptable 'medium of exchange.' In this lively history-cum-polemic, Martin says that the theory is 'entirely false,' and that the essence of monetary exchange is not 'the swapping of goods and services for this commodity medium' but a 'system of credit accounts and their clearing.'"

"Compulsively readable . . . Money is a fascinating and entertaining pep talk for bankers, economists and armchair revolutionaries dissatisfied with the current financial system, and an attempt to galvanize them into action."
— Heidi N. Moore, New York Times Book Review

“Felix Martin's remarkable book asks the big question: do economists have any idea what money is? His compelling answer is: no. You may not agree with the answer. But it will certainly force you to think.”
—Martin Wolf, author of Why Globalization Works

“Felix Martin has written a wonderfully original and entertaining history of money. If you have ever wondered why the whole system seems so dangerously and chronically unstable, this is the book to read.”
—Liaquat Ahamed, Pulitzer Prize-winning author of Lords of Finance

"An excellent book . . . Full of interesting history and insight . . . a beautiful and sometimes even entrancing study of human thought about money."
—Tyler Cowen, Times Literary Supplement

"Blending history and economic analysis in his engaging first book, economist and bond investor Martin explains the development of sovereign currency and its critically important function in modern economies. . . Martin approaches his subject in entertaining fashion, discussing monetarism and monetary theory, from John Locke to the Federal Reserve System. . . Fluent, discursive, and informed. It holds considerable appeal for investors, their bankers, and those drawn to the mechanics of wealth."
—Publishers Weekly

“The virtue of Martin’s book is that it exposes the deep flaws in the way we have traditionally thought about money. The exposition is clear . . . Fresh.”
—Alex Brummer, New Statesman

“Felix Martin condenses the broadest of subjects into a searing and potentially life-changing read that destroys all accepted knowledge of this thing we sell our souls for.”
—Shortlist

“So replete with literary and historical examples that the story almost tells itself . . . a lucid, colorful introduction to 3,000 years of monetary history.”
—Martin Sandbu, Financial Times

“[Martin] wants to change the way you think about money. He rejects the textbook idea that it’s an alternative to barter, the oil in the engine of the world economy. He sees money as a liberating (though unstable) system of creating and exchanging credit. This original and thought-provoking history of what’s in your wallet also offers some controversial solutions to the financial crisis, such as raising inflation levels and writing off national debts.”
—The Guardian (UK) Summer Book Roundup

“A most accessible and thrilling read. If you want to read just one book about money, this is it.”
—Ha-Joon Chang

“Combines breadth of scholarship with a wealth of practical experience in tackling the most elusive of economic subjects–the nature of money.”
—John Kay

"[I]n this improbably lively account [...] Martin seeks a deeper understanding, relating money especially to power [...] Refreshingly free of jargon and long on ideas—including the thought that if it’s money that got us into our current mess, it’s money that can get us out of it."
—Kirkus
Read More