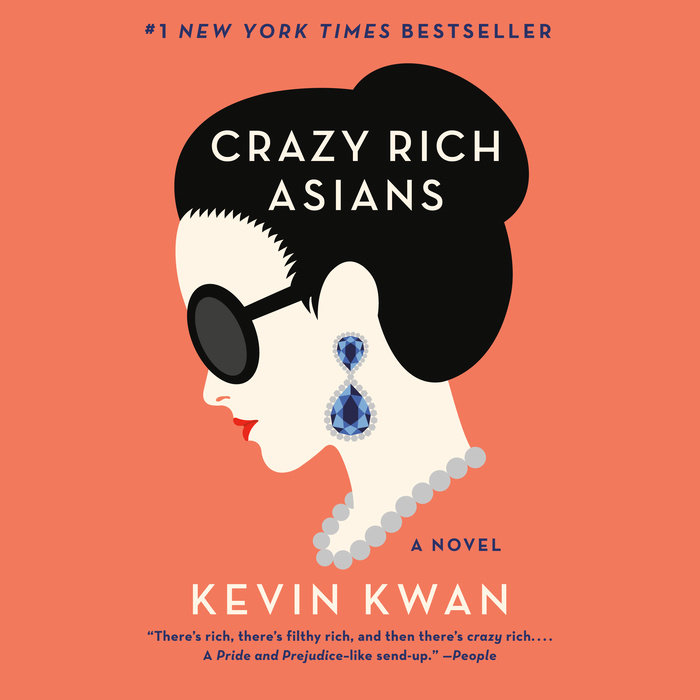 "There's rich, there's filthy rich, and then there's crazy rich ... A Pride and Prejudice-like send-up about an heir bringing his Chinese-American girlfriend home to meet his ancestor-obsessed family.” –PEOPLE

When New Yorker Rachel Chu agrees to spend the summer in Singapore with her boyfriend, Nicholas Young, she envisions a humble family home and quality time with the man she hopes to marry. But Nick has failed to give his girlfriend a few key details. One, that his childhood home looks like a palace; two, that he grew up riding in more private planes than cars; and three, that he just happens to be the country’s most eligible bachelor.

On Nick’s arm, Rachel may as well have a target on her back the second she steps off the plane, and soon, her relaxed vacation turns into an obstacle course of old money, new money, nosy relatives, and scheming social climbers.
Read More
"A dizzily shopaholic comedy of crass manners . . . Crazy Rich Asians offers refreshing nouveau voyeurism to readers who long ago burned out on American and English aspirational fantasies. Mr. Kwan either knows, or does a good job of pretending to know, how the very rich of Singapore, Hong Kong and Shanghai show off their lucre . . . Hilarious . . . This book name-drops about many different Asian cultures and mixes rude slang from Malay and the Cantonese and Hokkien dialects of Chinese . . . Mr. Kwan makes the most of them . . . A grand tour of a humorously grandiose and showoffy world. Mr. Kwan knows how to deliver guilty pleasures. He keeps the repartee nicely outrageous, the excess wretched and the details wickedly delectable."
—Janet Maslin, The New York Times

“Kwan’s rollicking, often-riotous debut novel, Crazy Rich Asians, reads like a behind-the-scenes primer of the rising über-elite of the ever-powerful Asian world . . . . the reader is given an intimate window into the spending and investing patterns, and burgeoning and crumbling relationships of this upper echelon of extraordinary wealth . . . an entertaining, engrossing novel . . . a lively, generous story of shallow extravagance and human devotion.”
—S. Kirk Walsh, The Boston Globe

“Crazy Rich Asians has all the plot and color of a tabloid mag, set in Asia. This means that front doors are cathedral sized, millions are now billions and shopping is, as one character puts it, ‘Fifth Avenue on steroids’ . . . Put on your designer shades, stuff an umbrella into your drink, and lose yourself in the antics of people who cheat on their husbands with secret overseas shopping trips. By the time you've finished you should have a rich, golden tan.”
—Emma Keller, The Guardian (UK)

“A debut novel that sheds light on the gilded world of Asian wealth and shopping culture that most Westerners only catch glimpses of.”
—Sarah Hampson, The Globe and Mail (Canada)

“Deliciously decadent . . . Rachel, an American-born Chinese (ABC), has no idea what to expect when she visits Singapore to meet her boyfriend Nick’s multibillionaire family. There, she discovers mind-blowing opulence--next season’s couture, palatial properties, million-dollar shopping sprees--and the over-the-top bad behavior that comes with it . . . This 48-karat beach read is crazy fun.”
—Stephan Lee, Entertainment Weekly

“There’s rich, there’s filthy rich, and then there’s crazy rich . . . A Pride and Prejudice-like send-up about an heir bringing his Chinese-American girlfriend home to meet his ancestor-obsessed family, the book hilariously skewers imperial splendor and the conniving antics of the Asians jet set.”
—People

“When Kevin Kwan’s Crazy Rich Asians has a mother in Singapore telling her girls to finish everything on their plates because ‘there are children starving in America,’ it’s O.K. to get the joke. There’s no need to dwell on what it really means. Crazy Rich Asians is this summer’s ‘Bergdorf Blondes,’ over-the-top funny and a novelty to boot. Mr. Kwan delivers nonstop hoots about a whole new breed of rich, vulgar, brand-name-dropping conspicuous consumers, with its own delicacies, curses, vices, stereotypes (‘I hope she’s not one of those Taiwanese tornadoes!’) and acronyms. According to Mr. Kwan, this crowd uses U.B.C., as the University of British Columbia, in Vancouver, is known, to mean ‘University of a Billion Chinese.’ How rich and vulgar are the Anglophile Asians of this debut novel? Rich enough to throw a diamond of more than 30 carats into a snowdrift and not look for it. So vulgar that a Cirque du Soleil troupe has to show up to convey that things have gotten crass. So steeped in wretched excess that one man boasts about the precise temperature his climate-controlled shoe closet should be.”
—The New York Times Beach Reading Roundup

“Mr. Kwan’s delightfully soapy debut, [is] set in the glamorous beau monde of Singapore—‘the Switzerland of Asia’—with excursions to Paris, Hong Kong and a private Indonesian island . . . It’s through Rachel, the wide-eyed interloper, that we view the extravagances of this ‘secretive, rarefied circle of families . . .’ Mr. Kwan’s book eats its chiffon cake and has it too, simultaneously tut-tutting many of its characters for their vapid materialism while reveling in the milieu’s sybaritic excess . . . Mr. Kwan skillfully engineers a good-natured story in which Rachel must overcome the schemes of Nicholas's disapproving mother.”
—Sam Sacks, The Wall Street Journal

“Crazy Rich Asians is like Dynasty on steroids with more private jets, bigger houses, and a lot more money. It is the very definition of a beach read. I finished it over a weekend and by the end was longing to see the ridiculously extravagant and over-the-top world that Mr. Kwan had created.... I predict this will be the 50 Shades of Grey of this summer.”
—Michael Carl, VanityFair.com

“Crazy Rich Asians is both a deliciously satiric read and a Fodor’s of sorts to the world of Singapore’s fabulously monied, both new and old.”
—Sherryl Connelly, New York Daily News

“Kwan is a modern-day Jane Austen, never mind gender or ethnicity, because he is writing about the same human pride and prejudices that consumed Austen 200 years ago.  In this comedy of manners about star-crossed lovers fighting against class distinctions and family pressures, the comparison between the Bennets, Bingleys and Darcys of 18th-century England and the Chus, Leongs and Youngs of 21st-century Singapore is most appropriate . . . Kwan comes across as an Asian Tom Wolfe . . . easily transports captive readers from Sex and the City New York and to sensual Singapore, lush with flowers, savoury with food, luxurious with designer labels and glittering jewels.  But beneath all this is the cruel menace of old money and unyielding traditional family mandates that aim to prevent the characters from living life according to their own desires.”
—Christine Mazur, Winnipeg Free Press

“It’s impossible not to get sucked into this satirical novel about the jet-setting lives of an enormous busybody family and its infinite Louboutin collection.”
—Glamour

“Kwan’s book was not nominated for a Booker, but if you want to peek into the world of wealthy Southeast Asian-Chinese elites, if you want to understand what drives these people who control the economy of a major cross-roads of the world, Kwan’s book is the one to beat.”
—Popmatters

"An entertaining and well-written book about the life of the Chinese super-rich, a new class who are keeping alive five-star hotels, restaurants and luxury shops around the world . . . The wealth of the book is in the detail—of the personalities, the places, the clothes and the colours of Singapore, Kwan's native place."
—Louise Rosario, South China Morning Post

“With his debut novel, [Kwan] delivers an uproarious, comical satire about a jet-set life that most of us can only imagine. It’s a page-turner that will leave you wanting more.”
—Claudia McNeilly, Hello! Magazine (Canada)

"Deliciously decadent . . . Rachel, an American-born Chinese (ABC), has no idea what to expect when she visits Singapore to meet her boyfriend Nick's multibillionaire family. There, she discovers mind-blowing opulence--next season's couture, palatial properties, million-dollar shopping sprees--and the over-the-top bad behavior that comes with it . . . This 48-karat beach read is crazy fun."
—Stephan Lee, Entertainment Weekly

"There's rich, there's filthy rich, and then there's crazy rich . . . A Pride and Prejudice-like send-up about an heir bringing his Chinese-American girlfriend home to meet his ancestor-obsessed family, the book hilariously skewers imperial splendor and the conniving antics of the Asians jet set."
—People

"Crazy Rich Asians is like Dynasty on steroids with more private jets, bigger houses, and a lot more money. It is the very definition of a beach read. I finished it over a weekend and by the end was longing to see the ridiculously extravagant and over-the-top world that Mr. Kwan had created . . . I predict this will be the 50 Shades of Grey of this summer."
—Michael Carl, VanityFair.com

“A juicy, close anthropological read of Singapore high society and its social and mating rituals . . . Kwan’s satirical portrayal rings so true, I fear he’ll need to bring a bodyguard next time he lands at Changi Airport. He gets the idiosyncratic details right: the market-savvy wives who day-trade and invest in poverty; . . . the encyclopedic fashion knowledge; the Bible-study get-togethers; the way the whole milieu is interrelated by blood or marriage. And he does a particularly good job of illustrating the divide . . . between mainland wealth and establishment money—an uneasy tension that is very real.”
—Janice Y. K. Lee, Elle

“Merit[s] a place on the must-read list of every development exec in town . . . Aimed at Bridget Jones lovers and those who got the satire behind Psy’s Gangnam Style.”
—Andy Lewis, Hollywood Reporter

“High-quality first-time fiction . . . [An] instant favorite . . . Opulence and zaniness reign when one of Singapore’s richest bachelors invites his American-born girlfriend to travel from New York to vacation in his native country.”
—O, The Oprah Magazine

"Kwan's debut is a fun, over-the-top romp through the unbelievable world of the Asian jet set, where anything from this season is already passé and one's pedigree is everything. . . . A witty tongue-in-cheek frolic about what it means to be from really old money and what it's like to be crazy rich."
—Publishers Weekly Pick of the Week

“Kwan’s debut is a scintillating fictional look into the opulent lives of fabulously wealthy Chinese expats . . . From its delightful opening scene onward, this sleek social satire offers up more than a few hilarious moments as it skewers the crafty, rich schemers who populate its pages.”
—Kristine Huntley, Booklist

"Crazy Rich Asians is an unputdownably funny, original, modern novel. An outrageous satire of the Asian squillionaire set, this book is like a Chinese Dallas meets Pride and Prejudice. The combination of gold homewares, couture, private jets, absurd social rules and snobbery is utterly hilarious. I actually couldn't put this book down to eat or to watch Downton Abbey."
—Plum Sykes, bestselling author of Bergdorf Blondes

“As spicily adventurous and lusciously satisfying as the renowned Singaporean street food Kevin Kwan's characters argue over; hot and sizzling, like the best satay, and dreamily transporting, like everyone's favorite dessert--goreng pisang. Feast on this outrageously funny and insightful novel of modern manners, and enjoy!”
—Lisa See, bestselling author of Dreams of Joy and Shanghai Girls

"Crazy Rich Asians is a shrewd, funny, sexy look at the spoiled jet-setter children of the Asian super-rich. It is at once a love story and a potent combination of vintage Jackie Collins and early Evelyn Waugh, everything you wanted to know about young people who have more fun, style and money than is good for them, and don't care a bit. A stunning debut."
—Michael Korda, bestselling author of Charmed Lives and Queenie

“Original and fun, Crazy Rich Asians is quite a roller coaster trip. I loved it!”
—Jackie Collins, bestselling author of The Power Trip
Read More

The Perfect Audiobooks for the Winter Solstice Based on Your Astrological SignBooks on Screen: Fall 2018 Adaptations Not to MissInternational Romances to Swoon OverSee More 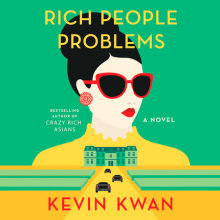 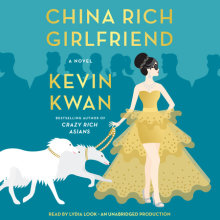 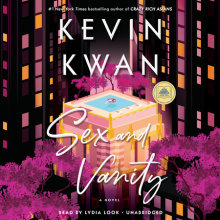