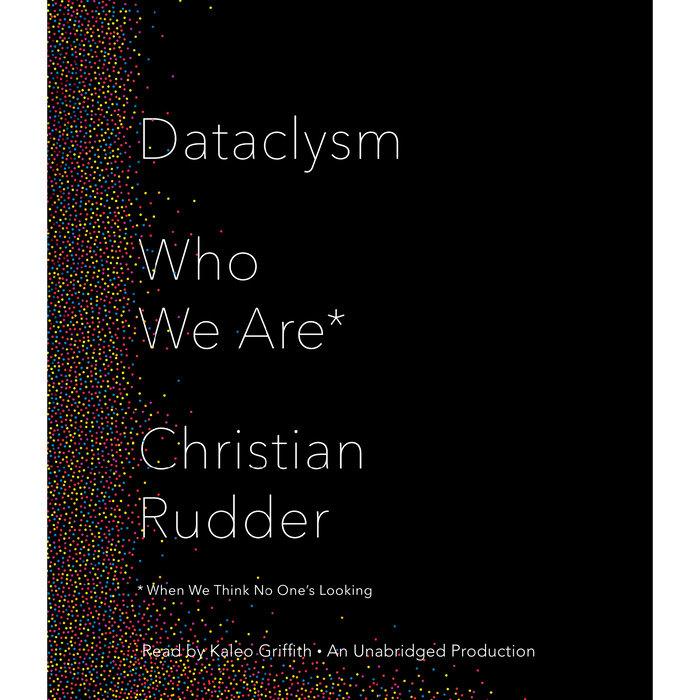 An audacious, irreverent investigation of human behavior—and a first look at a revolution in the making

Our personal data has been used to spy on us, hire and fire us, and sell us stuff we don’t need. In Dataclysm, Christian Rudder uses it to show us who we truly are.

For centuries, we’ve relied on polling or small-scale lab experiments to study human behavior. Today, a new approach is possible. As we live more of our lives online, researchers can finally observe us directly, in vast numbers, and without filters. Data scientists have become the new demographers.

In this daring and original book, Rudder explains how Facebook "likes" can predict, with surprising accuracy, a person’s sexual orientation and even intelligence; how attractive women receive exponentially more interview requests; and why you must have haters to be hot. He charts the rise and fall of America’s most reviled word through Google Search and examines the new dynamics of collaborative rage on Twitter. He shows how people express themselves, both privately and publicly. What is the least Asian thing you can say? Do people bathe more in Vermont or New Jersey? What do black women think about Simon & Garfunkel? (Hint: they don’t think about Simon & Garfunkel.) Rudder also traces human migration over time, showing how groups of people move from certain small towns to the same big cities across the globe. And he grapples with the challenge of maintaining privacy in a world where these explorations are possible.

"Most data-hyping books are vapor and slogans. This one has the real stuff: actual data and actual analysis taking place on the page. That’s something to be praised, loudly and at length. Praiseworthy, too, is Rudder’s writing, which is consistently zingy and mercifully free of Silicon Valley business gabble."
—Jordan Ellenberg, Washington Post

"As a researcher, Mr. Rudder clearly possesses the statistical acumen to answer the questions he has posed so well. As a writer, he keeps the book moving while fully exploring each topic, revealing his graphs and charts with both explanatory and narrative skill. Though he forgoes statistical particulars like p-values and confidence intervals, he gives an approachable, persuasive account of his data sources and results. He offers explanations of what the data can and cannot tell us, why it is sufficient or insufficient to answer some question we may have and, if the latter is the case, what sufficient data would look like. He shows you, in short, how to think about data."
—Wall Street Journal

"Rudder is the co-founder of the dating site OKCupid and the data scientist behind its now-legendary trend analyses, but he is also — as it becomes immediately clear from his elegant writing and wildly cross-disciplinary references — a lover of literature, philosophy, anthropology, and all the other humanities that make us human and that, importantly in this case, enhance and ennoble the hard data with dimensional insight into the richness of the human experience...an extraordinarily unusual and dimensional lens on what Carl Sagan memorably called ‘the aggregate of our joy and suffering.’"
—Maria Popova, Brain Pickings

"Fascinating, funny, and occasionally howl-inducing...[Rudder] is a quant with soul, and we’re lucky to have him."
—Elle

"There's another side of Big Data you haven't seen—not the one that promised to use our digital world to our advantage to optimize, monetize, or systematize every last part our lives. It's the big data that rears its ugly head and tells us what we don't want to know. And that, as Christian Rudder demonstrates in his new book, Dataclysm, is perhaps an equally worthwhile pursuit. Before we heighten the human experience, we should understand it first."
—TIME

"At a time when consumers are increasingly wary of online tracking, Rudder makes a powerful argument in Dataclysm that the ability to tell so much about us from the trails we leave is as potentially useful as it is pernicious, and as educational as it may be unsettling. By explaining some of the insights he has gleaned from OkCupid and other social networks, he demystifies data-mining and sheds light on what, for better or for worse, it is now capable of."
—Financial Times

"Dataclysm is a well-written and funny look at what the numbers reveal about human behavior in the age of social media. It’s both profound and a bit disturbing, because, sad to say, we’re generally not the kind of people we like to think — or say — we are."
—Salon

"For all its data and its seemingly dating-specific focus, Dataclysm tells the story set forth by the book's subtitle, in an entertaining and accessible way. Informative, eye-opening, and (gasp) fun to read. Even if you’re not a giant stat head."
—Grantland

"[Rudder] doesn’t wring or clap his hands over the big-data phenomenon (see N.S.A., Google ads, that sneaky Fitbit) so much as plunge them into big data and attempt to pull strange creatures from the murky depths."
—The New Yorker

"A hopeful and exciting journey into the heart of data collection...[Rudder's] book delivers both insider access and a savvy critique of the very machinery he is employed by. Since he's been in the data mines and has risen above them, Rudder becomes a singular and trustworthy guide.
—The Globe and Mail

"Compulsively readable — including for those with no particular affinity for numbers in and of themselves — and surprisingly personal. Starting with aggregates, Rudder posits, we can zoom in on the details of how we live, love, fight, work, play, and age; from numbers, we can derive narrative. There are few characters in the book, and few anecdotes — but the human story resounds throughout."
—Refinery29

"Rudder’s lively, clear prose…makes heady concepts understandable and transforms the book’s many charts into revealing truths…Rudder teaches us a bit about how wonderfully peculiar humans are, and how we go about hiding it."
—Flavorwire

"Dataclysm is all about what we can learn about human minds and hearts by analyzing the massive ongoing experiment that is the internet."
—Forbes

"The book reads as if it's written (well) by a curious child whose parents beg him or her to stop asking "what-if" questions. Rudder examines the data of the website he helped create with unwavering curiosity. Every turn presents new questions to be answered, and he happily heads down the rabbit hole to resolve them."
—U.S. News

"A wonderful march through infographics created using data derived from the web…a fun, visual book—and a necessary one at that."
—The Independent (UK), 2014's Best Books on the Internet and Technology

"This is the best book that I've read on data in years, perhaps ever. If you want to understand how data is affecting the present and what it portends for the future, buy it now."
—Huffington Post

"Rudder draws from big data sets – Google searches, Twitter updates, illicitly obtained Facebook data passed shiftily between researchers like bags of weed – to draw out subtle patterns in politics, sexuality, identity and behaviour that are only revealed with distance and aggregation…Dataclysm will entertain those who want to know how machines see us. It also serves as a call to action, showing us how server farms running everything from home shopping to homeland security turn us into easily digested data products. Rudder's message is clear: in this particular sausage factory, we are the pigs.”
—New Scientist

"Dataclysm offers both the satisfaction of confirming stereotypes and the fun of defying them…Such candor is disarming, as is Mr. Rudder’s puckish sense of humor."
–Pittsburgh Post-Gazette

"Studying human behavior is a little like exploring a jungle: it's messy, hard, and easy to lose your way. But Christian Rudder is a consummate guide, revealing essential truths about who we are. Big Data has never been so fun."
—Dan Ariely, author of Predictably Irrational

"Dataclysm is a book full of juicy secrets—secrets about who we love, what we crave, why we like, and how we change each other’s minds and lives, often without even knowing it. Christian Rudder makes this mathematical narrative of our culture fun to read and even more fun to discuss: You will find yourself sharing these intriguing data-driven revelations with everyone you know."
—Jane McGonigal, author of Reality Is Broken

"In the first few pages of Dataclysm, Christian Rudder uses massive amounts of actual behavioral data to prove what I always believed in my heart: Belle and Sebastian is the whitest band ever. It only gets better from there."
—Aziz Ansari

"It’s unheard of for a book about Big Data to read like a guilty pleasure, but Dataclysm does. It’s a fascinating, almost voyeuristic look at who we really are and what we really want."
—Steven Strogatz, Schurman Professor of Applied Mathematics, Cornell University, author of The Joy of x

"Smart, revealing, and sometimes sobering, Dataclysm affirms what we probably suspected in our darker moments: When it comes to romance, what we say we want isn't what will actually make us happy. Christian Rudder has tapped the tremendous wealth of data that the Internet offers to tease out thoughts on topics like beauty and race that most of us wouldn’t cop to publicly. It's a riveting read, and Rudder is an affable and humane guide."
—Adelle Waldman, author of The Love Affairs of Nathaniel P.

"Christian Rudder has written a funny and profound book about important issues. Race, love, sex—you name it. Are we the sum of the data we produce? Read this book immediately and see if you can answer the question."
—Errol Morris

"Big Data can be like a 3D movie without 3D glasses—you know there's a lot going on but you're mainly just disoriented. We should feel fortunate to have an interpreter as skilled (and funny) as Christian Rudder. Dataclysm is filled with insights that boil down Big Data into byte-sized revelations."
—Michael Norton, Harvard Business School, coauthor of Happy Money

"With a zest for both the profound and the wacky, Rudder demonstrates how the information we provide individually tells a vast deal about who we are collectively. A visually engaging read and a fascinating topic make this a great choice not just for followers of Nate Silver and fans of infographics, but for just about anyone who, by participating in online activity, has contributed to the data set."
—Library Journal 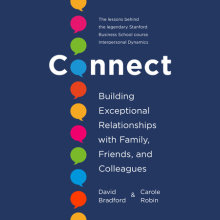 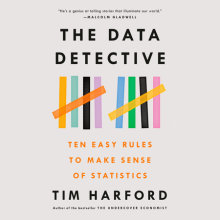 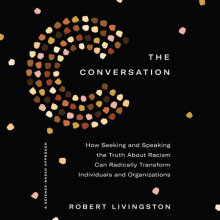 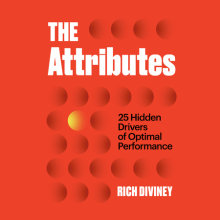