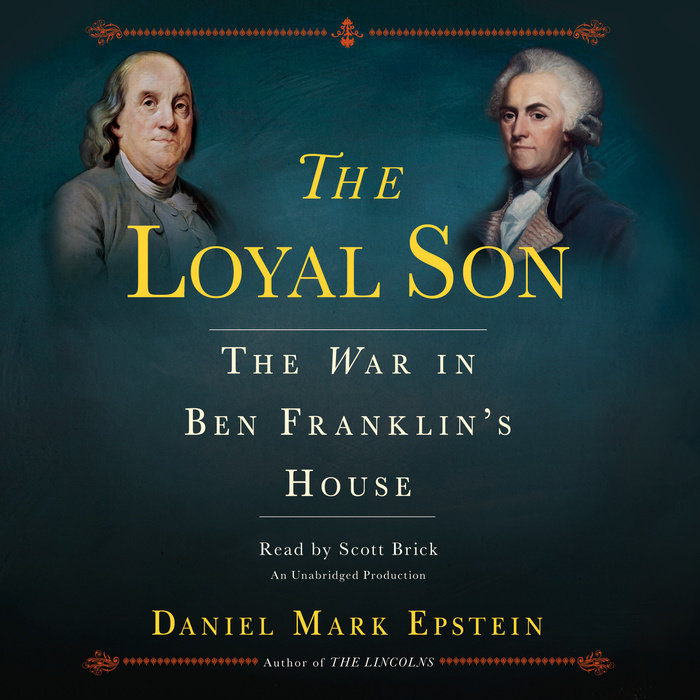 Written by: Daniel Mark Epstein
Read by: Scott Brick
16 Hours and 28 Minutes Imprint: Random House Audio Genre: Biography & Autobiography - Historical Release Date: May 30, 2017
The dramatic story of a founding father, his illegitimate son, and the tragedy of their conflict during the American Revolution—from the acclaimed author of The Lincolns.

Ben Franklin is the most lovable of America’s founding fathers. His wit, his charm, his inventiveness—even his grandfatherly appearance—are legendary. But this image obscures the scandals that dogged him throughout his life. In The Loyal Son, award-winning historian Daniel Mark Epstein throws the spotlight on one of the more enigmatic aspects of Franklin’s biography: his complex and confounding relationship with his illegitimate son William.

When he was twenty-four, Franklin fathered a child with a woman who was not his wife. He adopted the boy, raised him, and educated him to be his aide. Ben and William became inseparable. After the famous kite-in-a-thunderstorm experiment, it was William who proved that the electrical charge in a lightning bolt travels from the ground up, not from the clouds down. On a diplomatic mission to London, it was William who charmed London society. He was invited to walk in the procession of the coronation of George III; Ben was not.

The outbreak of the American Revolution caused a devastating split between father and son. By then, William was royal governor of New Jersey, while Ben was one of the foremost champions of American independence. In 1776, the Continental Congress imprisoned William for treason. George Washington made efforts to win William’s release, while his father, to the world’s astonishment, appeared to have abandoned him to his fate.

A fresh take on the combustible politics of the age of independence, The Loyal Son is a gripping account of how the agony of the American Revolution devastated one of America’s most distinguished families. Like Nathaniel Philbrick and David McCullough, Epstein is a storyteller first and foremost, a historian who weaves together fascinating incidents discovered in long-neglected documents to draw us into the private world of the men and women who made America.

“A fully immersive experience [that] illuminates the tangled family relationships of one of the pillars of the American Revolution.”—Library Journal

“A riveting narrative about the bizarre turmoil between Benjamin Franklin and his son William. The amount of new research undertaken is deeply impressive. And the writing is elegant and always informative. Highly recommended!”—Douglas Brinkley, professor of history, Rice University, CNN presidential historian, and author of Rightful Heritage

“This poignant, absorbing portrait of Benjamin Franklin and his son William is a powerful reminder that America’s fight for independence was also an agonizing civil war, in this case pitting a father against his beloved son. In exploring Franklin’s tormented relationship with William, the royal governor of New Jersey, who remained loyal to Britain, Daniel Mark Epstein brilliantly illuminates the American Revolution’s tragic human cost.”—Lynne Olson, New York Times bestselling author of Citizens of London and Last Hope Island

“The Loyal Son is must reading for those who want to see the American Revolution from the other side—the Tory side—and to be acquainted with Benjamin Franklin’s darker side.”—John Ferling, author of Whirlwind and Jefferson and Hamilton

“A gripping history of a family torn apart by political upheaval . . . Drawing on much unpublished correspondence as well as published works, the author constructs a fast-paced, vivid narrative with a host of characters whose appearance and personality he etches with deft concision. . . . A perceptive, gritty portrayal of the frenzy of war and a father and son caught at its tumultuous center.”—Kirkus Reviews (starred review)
Read More