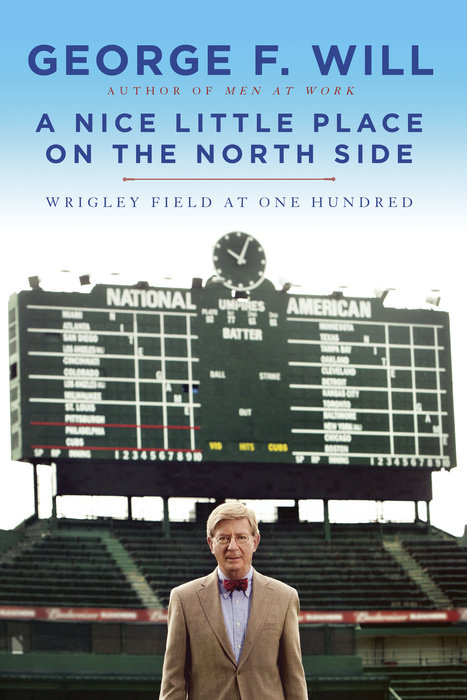 In A Nice Little Place on the North Side, leading columnist George Will returns to baseball with a deeply personal look at his hapless Chicago Cubs and their often beatified home, Wrigley Field, as it enters its second century. Baseball, Will argues, is full of metaphors for life, religion, and happiness, and Wrigley is considered one of its sacred spaces. But what is its true, hyperbole-free history?

Winding beautifully like Wrigley’s iconic ivy, Will’s  meditation on “The Friendly Confines” examines both the unforgettable stories that forged the field’s legend and the larger-than-life characters—from Wrigley and Ruth to Veeck, Durocher, and Banks—who brought it glory, heartbreak, and scandal. Drawing upon his trademark knowledge and inimitable sense of humor, Will also explores his childhood connections to the team, the Cubs’ future, and what keeps long-suffering fans rooting for the home team after so many years of futility.

“George Will is as serious about baseball as he is about the Constitution or foreign policy…. A Nice Little Place on the North Side is replete with the amusing trivia that in baseball constitutes lore.”—Wall Street Journal

“George F. Will’s wonderful book A Nice Little Place on the North Side reads like a history of a ballpark, but it’s really a fan’s interrogation of the most harrowing riddle: Why can’t the Cubs win?...[Will is] one of the great baseball writers.” –Commentary

“Will’s bow-tied, button-down prose wears quite well in this, his third insightful book about baseball, after Men at Work and Bunts. His eye for the game remains warm and acute, as do his conservative instincts.” –New York Times Book Review

“George Will is the most elegant of today’s political essayists, and with 'Men at Work,' 'Bunts' and this tribute to Chicago, the ballpark that graces it, and the fans who pack it to root for its hapless team, he can be counted among the best baseball writers to come down the pike…” –The Washington Times

“[Will’s] latest, A Nice Little Place on the North Side, will sit solidly on the bookshelf with his previous baseball classics…. As is always the case with Will, readers are treated to a mix of history, anecdotes, vignettes, cultural analysis, various informative diversions, and much wry humor.”—The American Spectator

“George F. Will is as eloquent on baseball as he is on politics.” –AARP Bulletin