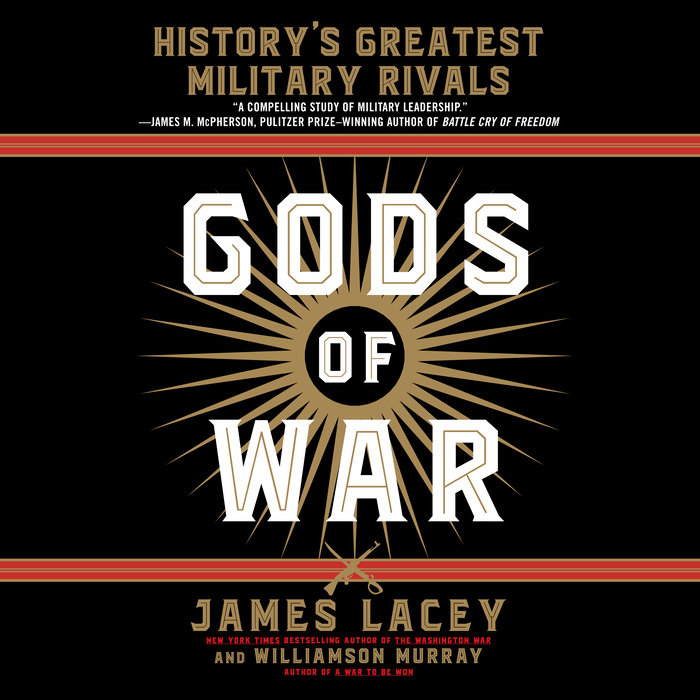 Written by: James Lacey & Williamson Murray
Read by: Rick Adamson
14 Hours and 50 Minutes Imprint: Random House Audio Genre: History - Military - General Release Date: May 19, 2020
Hannibal vs. Scipio. Grant vs. Lee. Rommel vs. Patton. The greatest battles, commanders, and rivalries of all time come to life in this engrossing guide to the geniuses of military history.

Any meeting of genius may create sparks, but when military geniuses meet, their confrontations play out upon a vast panorama of states or civilizations at war, wielding the full destructive power of a mighty nation’s armies. Gods of War is the first single-volume, in-depth examination of the most celebrated military rivalries of all time, and of the rare, world-changing battles in which these great commanders in history matched themselves against true equals.

From Caesar and Pompey deciding the fate of the Roman Republic, to Grant and Lee battling for a year during the American Civil War, to Rommel and Montgomery and Patton meeting in battle after battle as Hitler strove for European domination, these match-ups and their corresponding strategies are among the most memorable in history.

A thrilling look into both the generals’ lives and their hardest-fought battles, Gods of War is also a thought-provoking analysis of the qualities that make a strong commander and a deep exploration of the historical context in which the contestants were required to wage war, all told with rousing narrative flair. And in a time when technology has made the potential costs of war even greater, it is a masterful look at how military strategy has evolved and what it will take for leaders to guide their nations to peace in the future.
Read More
“Gods of War presents an ideal pairing of famous military opponents in history, especially their complementary strengths and weaknesses and what dramatic circumstances made them face each other at decisive moments. Anyone who thinks we already know the stories and have fully read the minds of great commanders such as Napoleon and Wellington, Grant and Lee, Hannibal and Scipio, Caesar and Pompey, Richard I and Saladin, and Patton and Rommel, will be surprised and fascinated. Reminiscent of the classic Plutarch’s Lives from the Greeks and Romans but rightly including modern commanders, Lacey’s and Murray’s keen insights are carefully drawn from lifelong military experience and well thought-out analyses. Famous battle outcomes are thus familiar yet often novel, even in appreciation of the long and comprehensive literature of military history. The quick pace but panoramic view hold our attention rapt.”—Patrick Hunt, author of Hannibal and Ten Discoveries That Rewrote History

“This compelling study of military leadership analyzes history’s most prominent generals, who fought each other in major campaigns and battles dating from the third century B.C. to World War II. In a key finding, the operational and tactical brilliance of such commanders as Hannibal, Napoleon, Robert E. Lee, and Erwin Rommel could not overcome their strategic failures in confrontations with Scipio, Wellington, Grant, or the Allied commanders in the 1940s, who had a better grasp of strategy.”—James M. McPherson, Pulitzer Prize–winning author of Battle Cry of Freedom: The Civil War Era

“A stylish and intriguing survey of showdowns between ‘military geniuses’ . . . Brisk recaps of the Battle of Arsuf in the Third Crusade, the Battle of Austerlitz in 1805, and Grant’s Overland Campaign in the Civil War, among other clashes, include colorful details and memorable quotations from the outsize personalities involved. . . . Military history buffs will be enthralled.”—Publishers Weekly

“[An] expert mixture of lively nuts-and-bolts descriptions of combat and opinions on why some legendary generals won their wars and others did not.”—Kirkus Reviews
Read More 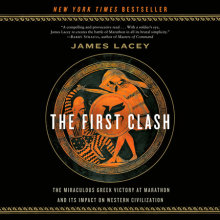 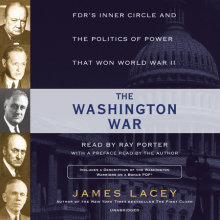 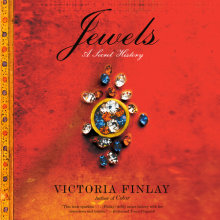