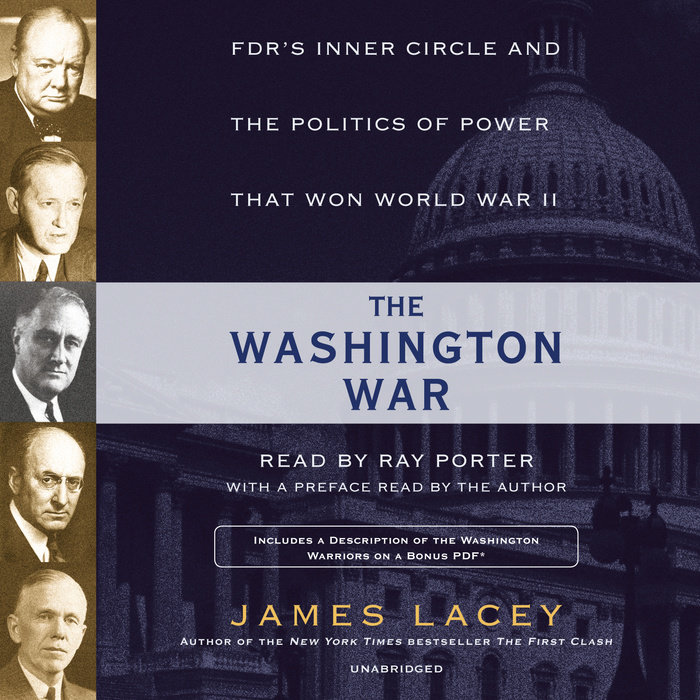 Written by: James Lacey
Read by: Ray Porter & James Lacey
19 Hours and 33 Minutes Imprint: Random House Audio Genre: History - Wars & Conflicts - World War II - General Release Date: May 28, 2019
A Team of Rivals for World War II—the inside story of how FDR and the towering personalities around him waged war in the corridors of Washington, D.C., to secure ultimate victory on the battlefields of Europe and the Pacific.

The Washington War is the story of how the Second World War was fought and won in the capital’s halls of power—and how the United States, which in December 1941 had a nominal army and a decimated naval fleet, was able in only thirty months to fling huge forces onto the European continent and shortly thereafter shatter Imperial Japan’s Pacific strongholds.

Three quarters of a century after the overwhelming defeat of the totalitarian Axis forces, the terrifying, razor-thin calculus on which so many critical decisions turned has been forgotten—but had any of these debates gone the other way, the outcome of the war could have been far different: The army in August 1941, about to be disbanded, saved by a single vote. Production plans that would have delayed adequate war matériel for years after Pearl Harbor, circumvented by one uncompromising man’s courage and drive. The delicate ballet that precluded a separate peace between Stalin and Hitler. The almost-adopted strategy to stage D-Day at a fatally different time and place. It was all a breathtakingly close-run thing, again and again.

Renowned historian James Lacey takes readers behind the scenes in the cabinet rooms, the Pentagon, the Oval Office, and Hyde Park, and at the pivotal conferences—Campobello Island, Casablanca, Tehran—as these disputes raged. Here are colorful portraits of the great figures—and forgotten geniuses—of the day: New Dealers versus industrialists, political power brokers versus the generals, Churchill and the British high command versus the U.S. chiefs of staff, innovators versus entrenched bureaucrats . . . with the master manipulator, Franklin Delano Roosevelt, at the center, setting his brawling patriots one against the other and promoting and capitalizing on the furious turf wars.

Based on years of research and extensive, previously untapped archival resources, The Washington War is the first integrated, comprehensive chronicle of how all these elements—and towering personalities—clashed and ultimately coalesced at each vital turning point, the definitive account of Washington at real war and the titanic political and bureaucratic infighting that miraculously led to final victory.


Includes a bonus PDF of a who's who of the Washington Warriors
Read More
“Superb.”—The Wall Street Journal

“A convincing addition to the literature of WWII . . . Lacey deals with issues and strategies, including complex economic considerations, that many others have largely bypassed. . . . Comparisons to Doris Kearns Goodwin’s Team of Rivals, about Lincoln’s cabinet, are inevitable, and, in fact, the two books make an excellent pairing.”—Booklist

“A densely researched, thorough history for students of Roosevelt and World War II . . . Lacey manages to gather together the many strands of this remarkable story of how the U.S. government harnessed the disparate talents of business leaders, congressmen, volatile generals, and prickly heads of state such as Churchill.”—Kirkus Reviews

“No one before Lacey has wrangled such a large cast and covered so much bureaucratic ground. There is scarcely a significant quarrel or even mild dispute that Lacey doesn’t address. . . . This is great fun.”—The Washington Post

“James Lacey’s fine new book on the Washington front in World War II makes for compelling and instructive reading—compelling because the powerful and opinionated figures he depicts pulled no punches in their battles for policy supremacy, instructive because such struggles are always with us, in one form or another.”—H. W. Brands, bestselling author of Traitor to His Class and Dreams of El Dorado

“James Lacey’s study of World War II Washington politics reminds us that managing wartime affairs or exercising control in D.C. is always a great challenge. The Washington War, about Franklin Roosevelt’s masterful handling of political difficulties, should be a primer for anyone who is discouraged by current events and wishes to recall how a president makes our system of government function effectively.”—Robert Dallek, New York Times bestselling author of An Unfinished Life: John F. Kennedy, 1917–1963

“James Lacey has produced a spectacular book on how American decision making and strategy formulation occurred in the political maelstrom of wartime Washington, the center of the Second World War’s most powerful nation. A work that everyone who has more than a  passing interest in the history of World War II needs to read, The Washington War now establishes Professor Lacey as one of the most important scholars  of American military history.”—Williamson Murray, co-author of A War to Be Won and A Savage War