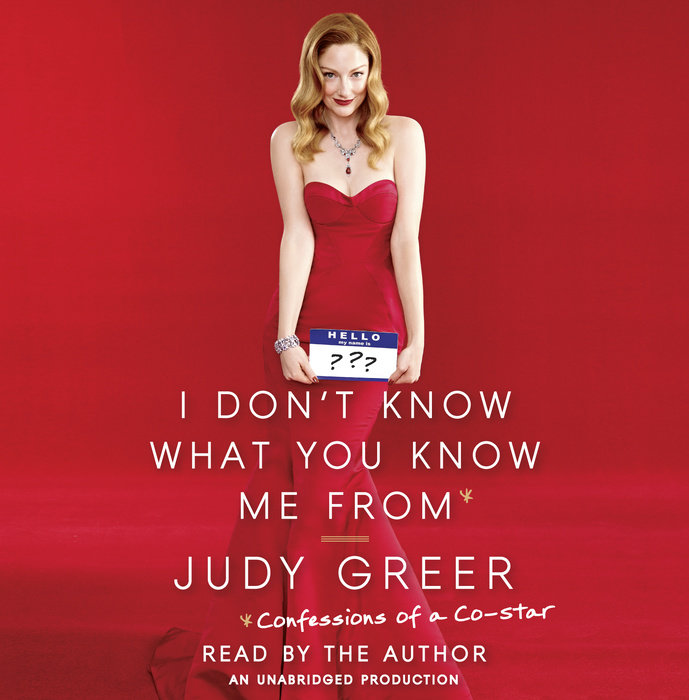 You know Judy Greer, right? Maybe from The Wedding Planner, 13 Going on 30, Carrie, Arrested Development, or The Descendants. Yes, you totally recognize her. And, odds are, you already feel like she’s your friend.

In her first book of essays, I Don’t Know What You Know Me From, Greer writes about everything you would hope to hear from your best friend: how a midnight shopping trip to Walgreens can cure all; what it’s like to wake up one day with stepchildren; and how she really feels about fans telling her that she’s prettier in person. Yes, it’s all here—from the hilarious moments to the
intimate confessions.

But Judy Greer isn’t just a regular friend—she’s a celebrity friend. Want to know which celebs she’s peed next to? Or what the Academy Awards are actually like? Or which hot actor gave her father a Harley-Davidson? Don’t worry; Greer reveals all of that, too. You’ll love her because, besides being laugh-out-loud funny, she makes us genuinely feel like she’s one of us. Because even though she sometimes has a stylist and a makeup artist, she still wears (and hates!) Spanx. Because even after almost twenty years in Hollywood, she still hasn’t figured everything out—except that you should always wash your face before bed. Always.

“These essays on everything from her mom the (former) nun to her inability to ditch a mortifying vanity plate because her dad made (“*2B”) to her passion for her toothless bulldog rescue will make you wish Greer was your wacky best friend.”
—People Magazine

“Intimate and frank . . .  And for fans of hers who do know why they know her, and who have been clamoring for the gifted character actress to get the starring role they’ve long felt she’s deserved, I Don’t Know What You Know Me From proves what they’ve always suspected: Judy Greer shines in the starring role. It really is just like gossiping—and, occasionally, kvetching—with a friend over a glass of wine.”
—The Daily Beast

"The book is so funny it might make [Greer] a household name."
—Ladies' Home Journal

"[Greer's] charming memoir is a series of vignettes covering her childhood in Michigan, her adventures in stepparenting, and her experiences on film and television sets. . . . [Her] bubbly best-friend personality and self-deprecating anecdotes will have readers rooting for her, and will likely win her new fans."
—Booklist

"Greer is an engaging and witty storyteller, at turns wistful and unsparingly honest. . . . Readers will wish Greer was their conspiratorial best friend."
—Kirkus

“Reading this book is like talking to Judy Greer herself, impossible to do without a smile on your face. Finally this perennial co-star gets to confound Hollywood’s expectations and take center stage in a role that’s every bit as hilarious, delightful, and brutally honest as the comedienne herself. It’s a role only one person was born to play: Sandra Bullock. (Although maybe Judy could be her friend or something?)”
—Mitch Hurwitz

“Whether or not you ‘know what you know her from,’ chances are you have seen Judy Greer in a movie, at least once in your life, and wanted to be best friends with her. The good news is that her book is just as honest, witty, and observant as she actually is. From her early life and her experiences in love and friendship to the weird world of Hollywood, she candidly spills the beans and consistently entertains. So now is your chance—you too can be friends with Judy (sort of).”
—Rashida Jones

“If you’ve heard Judy speak even once you can hear her voice all through these wonderful stories, because she writes like she talks and what she says is so much fun to listen to. My only complaint was how much I missed her when the book was over—but that’s how I always feel after a long stay with a good friend.”
—Jim Parsons

“I read it in one sitting. Then I flushed.”
—Zach Galifianakis