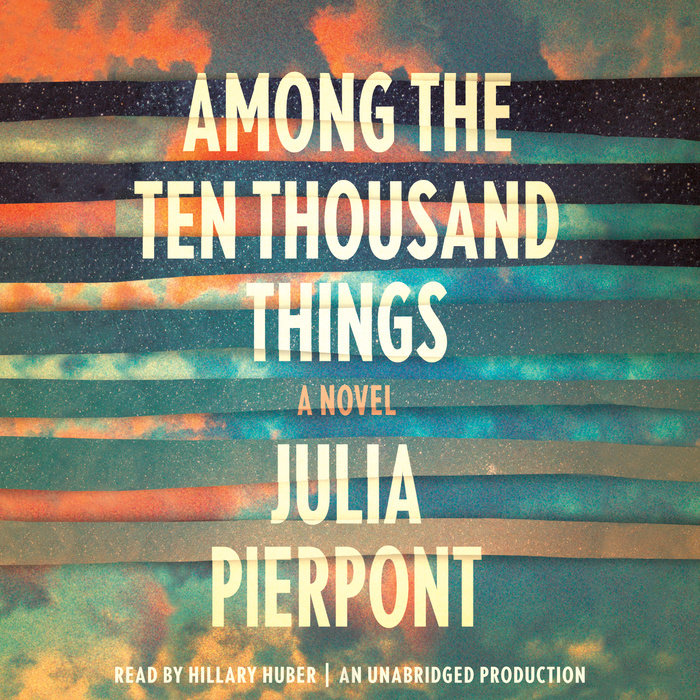 Written by: Julia Pierpont
Read by: Hillary Huber
9 Hours and 6 Minutes Imprint: Random House Audio Genre: Fiction - Literary Release Date: July 07, 2015
NEW YORK TIMES BESTSELLER • NAMED ONE OF THE BEST BOOKS OF THE YEAR BY SAN FRANCISCO CHRONICLE AND THE HUFFINGTON POST • For fans of Jennifer Egan, Jonathan Franzen, Lorrie Moore, and Curtis Sittenfeld, Among the Ten Thousand Things is a dazzling first novel, a portrait of an American family on the cusp of irrevocable change, and a startlingly original story of love and time lost.

Jack Shanley is a well-known New York artist, charming and vain, who doesn’t mean to plunge his family into crisis. His wife, Deb, gladly left behind a difficult career as a dancer to raise the two children she adores. In the ensuing years, she has mostly avoided coming face-to-face with the weaknesses of the man she married. But then an anonymously sent package arrives in the mail: a cardboard box containing sheaves of printed emails chronicling Jack’s secret life. The package is addressed to Deb, but it’s delivered into the wrong hands: her children’s.

With this vertiginous opening begins a debut that is by turns funny, wise, and indescribably moving. As the Shanleys spin apart into separate orbits, leaving New York in an attempt to regain their bearings, fifteen-year-old Simon feels the allure of adult freedoms for the first time, while eleven-year-old Kay wanders precariously into a grown-up world she can’t possibly understand. Writing with extraordinary precision, humor, and beauty, Julia Pierpont has crafted a timeless, hugely enjoyable novel about the bonds of family life—their brittleness, and their resilience.

Praise for Among the Ten Thousand Things

“This book is one of the funniest, and most emotionally honest, I’ve read in a long time.”—Jonathan Safran Foer

“Obsessively compelling . . . emotionally sophisticated . . . Among the Ten Thousand Things rises above [other novels] for its imagined structure, sentence-by-sentence punch, and pure humanity.”—Vanity Fair

“Gripping . . . Pierpont brings this family of four to life in sharply observed detail. . . . An acute observer of social comedy, Ms. Pierpont has a keen eye for the absurd.”—The Wall Street Journal

“Pierpont’s language is heart-stopping. . . . Between Pierpont’s literary finesse and her captivating characters, [Among the Ten Thousand Things] reads like a page-turner.”—Entertainment Weekly (grade: A)

“There are going to be as many ingenious twists and turns in this literary novel as there are in a top-notch work of suspense like Gone Girl.”—Maureen Corrigan, NPR’s Fresh Air

“Tender, delicately perceptive . . . Pierpont’s voice is wry and confident, and she is a fine anthropologist of New York life.”—The Washington Post

“Pierpont displays a precocious gift for language and observation. . . . She captures the minutiae of loneliness that pushes us away from each other and sometimes brings us back.”—San Francisco Chronicle
Read More
“A luscious, smart summer novel . . . about a family blown apart and yet still painfully tethered together, written by a blazingly talented young author whose prose is so assured and whose observations are so precise and deeply felt that it’s almost an insult to bring up her age. . . . [Julia] Pierpont illustrates how hard it can be to grow up, at any age—just one of the many reasons Among the Ten Thousand Things is such an impressive debut.”—Helen Schulman, The New York Times Book Review

“This book is one of the funniest, and most emotionally honest, I’ve read in a long time.”—Jonathan Safran Foer

“An emotionally sophisticated, nuanced examination of a splintering Upper West Side New York City family . . . Among the Ten Thousand Things rises above for its imagined structure, sentence-by-sentence punch, and pure humanity. Weaving readers through the New York streets with the Shanleys, and in and out of each of their minds as they try to survive the infidelity that’s torn them from the life they’ve built, Pierpont has written a debut so honest and mature that it will resonate with even the most action-hungry readers—perhaps against reason. Her story is the one we’ll be talking about this summer, and well beyond.”—Meredith Turits, Vanity Fair

“[An] excellent, insightful first novel . . . a gripping portrait of the disintegration of the Shanley family . . . Pierpont brings this family of four to life in sharply observed detail. . . . An acute observer of social comedy, Ms. Pierpont has a keen eye for the absurd.”—Moira Hodgson, The Wall Street Journal

“Pierpont’s language is heart-stopping. In one scene, with her characters suspended in emotional turmoil, she pauses to describe their empty house. There’s even a sparse, poetic interlude in the middle of the book that skips across the family’s lives for decades. . . . Then she rewinds the decades and picks up where she left off. It’s the kind of structural risk that shouldn’t work, but in her skilled hands it lands beautifully. Technically, of course, this is a domestic drama. But between Pierpont’s literary finesse and her captivating characters, it reads like a page-turner. [Grade:] A”—Entertainment Weekly

“What sets Pierpont apart . . . is her storytelling chops. The chapters that follow that dramatic opening make it clear that there are going to be as many ingenious twists and turns in this literary novel as there are in a top-notch work of suspense like Gone Girl. The effect is dizzying: as a reader you feel, as the Shanleys do, that the earth keeps shifting beneath your feet.”—Maureen Corrigan, NPR’s Fresh Air

“[A] tender, delicately perceptive account of one family torn apart by infidelity . . . Pierpont’s voice is wry and confident, and she is a fine anthropologist of New York life, especially for those creative types who never quite manage to fit in with cultural expectations.”—The Washington Post

“[A] sharp, knowing dissection of an unraveling marriage . . . This is the first novel by Ms. Pierpont, . . . and it shows a remarkably mature understanding of the delicate emotional balances in families—how feelings can flow back and forth like electricity in some kind of zero-sum game—and the subtle, irrational vicissitudes of people’s psyches. . . . It is an old story, a crumbling marriage, but Ms. Pierpont gives it fresh insights, making the particular unhappiness (and occasional happiness) of the Shanleys by turns poignant, funny and very sad. . . . The book really comes alive when she gets inside the children’s heads and follows them around. Like the best fictional alienated-children-of-New York—Holden Caulfield; the Brooklyn kids in Noah Baumbach’s film The Squid and the Whale; more recently, the teenager at the heart of Peter Cameron’s novel Someday This Pain Will Be Useful to You—Kay and Simon exude an irresistible blend of worldliness and vulnerability, knowingness and cluelessness.”—Sarah Lyall, The New York Times

“Pierpont displays a precocious gift for language and observation. . . . She captures the minutiae of loneliness that pushes us away from each other and sometimes brings us back. . . . It’s an impressive insight from such a young writer and a reminder that none of us can know for certain what we would put up with in light of this truth.”—San Francisco Chronicle

“Fans of [Virginia] Woolf’s insight into the human consciousness . . . will savor Pierpont’s acute observation of a family in crisis, her deft pacing and deeply human characterization of each member of the family. Among the Ten Thousand Things speaks to what makes a person, and a family, tick, even when it can so easily seem utterly inexplicable.”—The Huffington Post

“Pierpont orchestrates the narrative with verve, telling her story from the perspective of each family member. There are moments of wry hilarity, and of wisdom. . . . Pierpont leaps into the future in two brief sections titled That Year and Those That Followed, then back into the ongoing crisis, making the details of how this family unravels ever more touching.”—BBC

“Pierpont’s entertaining debut is a domestic drama that investigates the way family evolves after being fragmented. When the novel isn’t tackling life’s questions about time, loyalty, and loneliness, it’s sprinkled with humor. . . . [Among the Ten Thousand Things is] worth taking with you to the beach this summer.”—LitReactor

“An expertly crafted story of a family in crisis . . . richly drawn and heartbreakingly sympathetic. Pierpont wields words like beautiful weapons. This short novel is a treat for fans of Jonathan Franzen, Jami Attenberg, and Emma Straub, and shows off an exciting new voice on the literary landscape.”—Library Journal (starred review)

“The perennial theme of marital infidelity is given a brisk, insightful, and sophisticated turn in Pierpont’s impressive debut. . . . This novel leaves an indelible portrait of lives blown off course.”—Publishers Weekly (starred review)

“Pierpont’s concentrated domestic drama is piquantly distinctive, from its balance of humor and sorrow to its provocatively off-kilter syntax, original and resonant descriptions, bristling dialogue, snaky psychological insights, and escalating tension. . . . With acid wit and thoughtful melancholy, Pierpont catalogs the wreckage, mourns the death of innocence, and measures varying degrees of recovery, achieving a Salingeresque ambience.”—Booklist

“Remarkable . . . Julia Pierpont displays not only wisdom, but real tact as a writer, knowing how much to say, how much to leave out, how much to imply.”—Colm Tóibín

“Every page of this gorgeous novel contains such joys that you won’t want to stop reading for anything.”—J. Courtney Sullivan

“Poignant, surprising, and fiercely intelligent, Among the Ten Thousand Things is about the sturdiness and tremendous delicacy of the bonds between parents and children. Don’t miss this powerful debut.”—Megan Abbott

“A vicious and enchanting portrait of a fragmenting family that will leave you hungry for whatever Julia Pierpont does next.”—Courtney Maum

“Sharply observed and deeply illuminating, Among the Ten Thousand Things marks the beginning of what is sure to be a brilliant career.”—Elliott Holt

“Why aren’t there more first or second or seventh novels like Among the Ten Thousand Things? That’s what I asked myself as I read—actually, devoured—Julia Pierpont’s debut. My conclusion: Very few writers, at any point in their lives, can produce prose of the sort you’ll find here.”—Sean Wilsey

“Among the Ten Thousand Things succeeds in being both heartbreaking and funny: It’s a wry, sly look at a privileged New York upbringing and the ultimate loneliness at the heart of it.”—Mary Gordon

“Julia Pierpont’s voice is as indestructible as her characters. Among the Ten Thousand Things brings the news and brings it in technicolor: Here is the real modern family.”—Darin Strauss
Read More