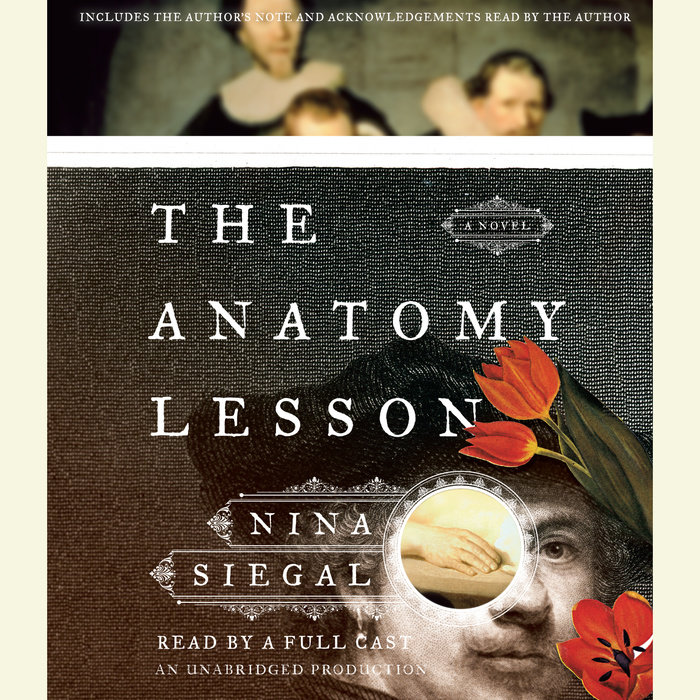 Written by: Nina Siegal
Read by: Nina Siegal, Bruce Mann, Emma Jayne Appleyard, Gildart Jackson, Steve West, Adam Alexi-Malle, Peter Altschuler & Hannah Curtis
9 Hours and 11 Minutes Imprint: Random House Audio Genre: Fiction - Literary Release Date: March 11, 2014
Set in one day in 1632, The Anatomy Lesson is a stunning portrayal of Golden Age Amsterdam and a brilliantly imagined back-story to Rembrandt's first great work of art. Told from several points of view, ranging from a curio dealer who collects bodies for the city’s chief anatomist to philosopher Rene Descartes, the novel opens on the morning of the medical dissection that is to be recorded by the twenty-six-year-old artist from Leiden who has yet to attach his famous signature to a painting.

As the story builds to its dramatic and inevitable conclusion, the events that transpire throughout the day sway Rembrandt to make fundamental changes to his initial composition. These changes will remain mysteries for centuries until a young art historian closely examines the painting in the twenty-first century, and makes surprising discoveries about the painter, his process, and his genius for capturing enduring truths about human nature in a single moment.

"Siegal succeeds in the task she has set for herself—to transmute her material into a work of art."—The New Yorker

"Virtually every sentence is drenched in the atmosphere of 17th-century Amsterdam. We feel as if we are walking at Rembrandt’s side, in a cell awaiting the execution of a thief, rushing through the streets with the condemned’s lover in hopes of saving him. This is a novel to be absorbed for its rich evocation of a single day when one man died and another rose to fame for his art."—Historical Novel Society

"Once in a rare while, you get to read a story of such breathtaking beauty and intelligence that you remember why you love to read. The Anatomy Lesson is just such a novel. In stunning prose, Nina Siegal animates Rembrandt’s first masterpiece, spinning a deeply affecting tale of love, loss and redemption as she reveals the secrets of the human soul. It is a gorgeous literary page turner of immense sympathy and elegance, equal in artistic élan to its inspiration. Brava!" —Robin Oliveira, author of My Name is Mary Sutter and I Always Loved You

"Rembrandt's The Anatomy Lesson of Dr. Nicolaes Tulp  is a narrative in paint which tells a story of Amsterdam in its Golden Age. Now, Nina Siegal's lovely novel dissects the dissection, evocatively translating the painted narrative into words, bringing a grim tableau to life and reanimating a moment in history when art, science, life, and death converged." —Russell Shorto, author of Amsterdam: A History of the World's Most Liberal City

"Brilliantly structured, wonderfully evocative, filled with vivid characters, The Anatomy Lesson transports the reader to that day in 1632 when the coat thief Aris Kindt passed from life to death and from death, thanks first to Rembrandt and now Nina Siegal, into immortality. A dazzling debut." —Margot Livesey, author of The Flight of Gemma Hardy

"Siegal takes one fascinating work of art and transmutes it into another."—Abigail Dalton, Everyday eBook