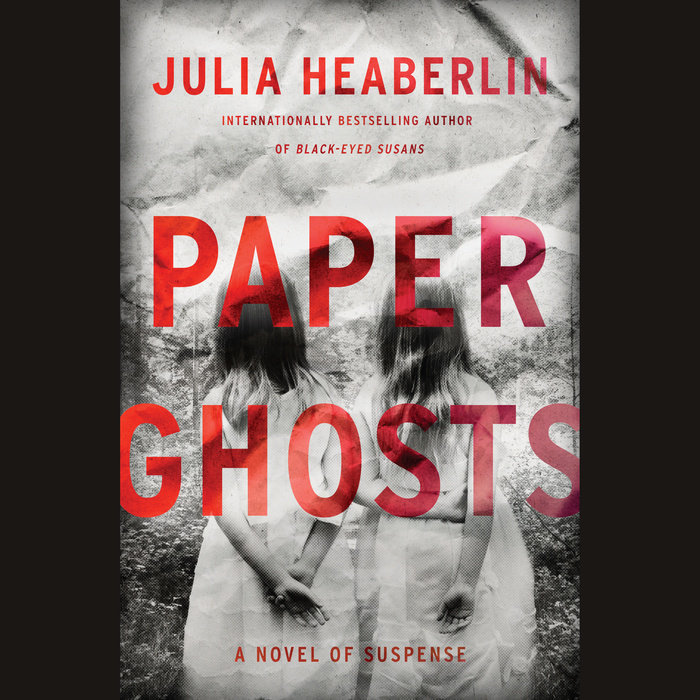 Written by: Julia Heaberlin
Read by: Catherine Taber
10 Hours and 3 Minutes Imprint: Random House Audio Genre: Fiction - Thrillers - Suspense Release Date: May 15, 2018
A Texas map marked with three red dots like drops of blood. A serial killer who claims to have dementia. A mysterious young woman who wants answers. What could go wrong?

Years ago, her sister Rachel vanished. Now she is almost certain the man who took Rachel sits in the passenger seat beside her. He claims to have dementia and no memory of murdering girls across Texas in a string of places where he shot eerie pictures. To find the truth, she proposes a dangerous idea: a ten-day road trip with a possible serial killer to examine cold cases linked to his haunting photographs. Is he a liar or a broken old man? Is he a pathological con artist—or is she? You won’t see the final, terrifying twist spinning your way until the very last mile.

“Paper Ghosts is a riveting summer read that shows Texas in a powerfully intimate light.” —The Austin Chronicle

“[Paper Ghosts] elevates the often tawdry genre of the serial killer novel to a work of art.”—Sunday Express (UK)

“[Heaberlin has] developed a distinctive literary voice, one that is on full display in Paper Ghosts.”—Houston Chronicle

“Strong characterisation, haunting images, a wonderful sense of place, and some dark comedy make this travelogue-cum-psychological thriller well worth the read.”—The Guardian
Read More
“You’ll enjoy the journey and all its macabre side trips. You’ll love the travel commentary written in Heaberlin’s lean, muscular prose. . . . Signposts along the way warn of angst, secrets and deadly plot twists, but you’ll never see what’s coming. You’ll step out of this fictional vehicle feeling like you’ve been T-boned by an 18-wheeler.”—The Washington Post

“A rich hybrid work that’s at once a zany, dialogue-propelled two-hander, a murder mystery, a road novel, a pair of psychological case studies and a meditation on photography. It would make a fine indie movie, although screen adaptation would entail sacrificing Heaberlin’s evocative prose.”—The Sunday Times (UK), Thriller of the Month

“I kept thinking of [Patricia] Highsmith while reading Paper Ghosts. . . . Heaberlin anchors her books with troubled but endearingly badass women. . . . Like Highsmith, Heaberlin displays a keen grasp of casual cruelty that defines human interaction, not to mention a flair for stories in which no one—least of all the protagonist—can be trusted. . . . Texas has yet again bred a major American noir writer.”—D Magazine

“[An] artful and elegiac psychological thriller . . . Heaberlin brilliantly combines travelogue with a heartbreaking portrait of the damage done by childhood. . . . [She] wields words like weapons, with each one chosen to heighten tension, underscore emotion, or foreshadow doom.”—Publishers Weekly (starred review)

“Strong characterisation, haunting images, a wonderful sense of place, and some dark comedy make this travelogue-cum-psychological thriller well worth the read.”—The Guardian

“Paper Ghosts is a riveting summer read that shows Texas in a powerfully intimate light.” —The Austin Chronicle

“The emotion is amazing. The scenes and characters are both so strong and so believable. . . . Get ready to be terrified!”—Suspense Magazine

“Heaberlin’s spot-on depiction of mental anguish, her careful creation of characters who are mean and troubled yet compelling, and an unexpected twist at the end make this a winner.”—Booklist

“Heaberlin’s works beautifully evoke the texture and landscape of the state of Texas while acknowledging the ambivalence and occasional menace that underlies the sublime beauty of the state, and her latest is no exception.”—CrimeReads

“The layers of the story both peel away and deepen as the search into the mind of a killer takes turns no one is expecting.”—RT Book Reviews

“This outstanding thriller will blow you out of your lawn chair.”—Minneapolis Star Tribune