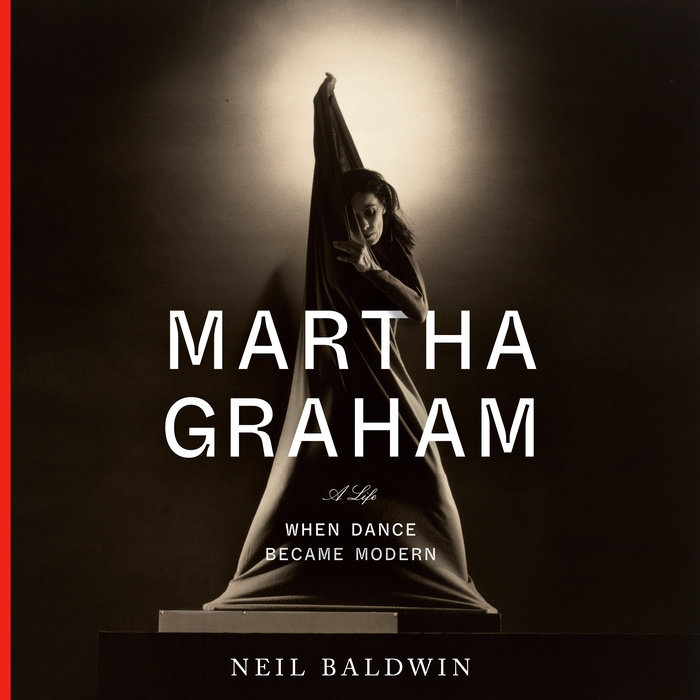 Written by: Neil Baldwin
Read by: Gabrielle De Cuir & Neil Baldwin
19 Hours and 13 Minutes Imprint: Random House Audio Genre: Biography & Autobiography - Entertainment & Performing Arts Release Date: October 25, 2022
A major biography—the first in three decades—of one of the most important artistic forces of the twentieth century, the legendary American dancer and choreographer who upended dance, propelling the art form into the modern age, and whose profound and pioneering influence is still being felt today.

"Brings together all the elements of Graham’s colorful life...with wit, verve, critical discernment, and a powerful lyricism.”—Mary Dearborn, acclaimed author of Ernest Hemingway

Time magazine called her “the Dancer of the Century.” Her technique, used by dance companies throughout the world, became the first long-lasting alternative to the idiom of classical ballet. Her pioneering movements—powerful, dynamic, jagged, edgy, forthright—combined with her distinctive system of training, were the epitome of American modernism, performance as art. Her work continued to astonish and inspire for more than sixty years as she choreographed more than 180 works.

At the heart of Graham’s work: movement that could express inner feeling.

Neil Baldwin, author of admired biographies of Man Ray (“Truly definitive . . . absolutely fascinating” —Patricia Bosworth) and Thomas Edison (“Absorbing, gripping, a major contribution to our understanding of a remarkable man and a remarkable era” —Robert Caro), gives us the artist and performer, the dance monument who led a cult of dance worshippers as well as the woman herself in all of her complexity.

Here is Graham, from her nineteenth-century (born in 1894) Allegheny, Pennsylvania, childhood, to becoming the star of the Denishawn exotic ballets, and in 1926, at age thirty-two, founding her own company (now the longest-running dance company in America).

Baldwin writes of how the company flourished during the artistic explosion of New York City’s midcentury cultural scene; of Erick Hawkins, in 1936, fresh from Balanchine’s School of American Ballet, a handsome Midwesterner fourteen years her junior, becoming Graham’s muse, lover, and eventual spouse. Graham, inspiring the next generation of dancers, choreographers, and teachers, among them: Merce Cunningham and Paul Taylor.

Baldwin tells the story of this large, fiercely lived life, a life beset by conflict, competition, and loneliness—filled with fire and inspiration, drive, passion, dedication, and sacrifice in work and in dance creation.
Read More
“Mesmerizing . . . The trailblazing Graham seemingly sculpted modern dance out of thin air, creating indelible works like Heretic, Lamentation, and Primitive Mysteries, always looking to the future. Provocative and passionate as the dynamo herself, this richly detailed and insightful page-turner will delight dance aficionados.”—Publishers Weekly (starred)

“Neil Baldwin’s majestic biography of Martha Graham comes at a time in these comic book days when our souls need to be inspired by the austere passion of this American pioneer, this fanatical ‘prophetess’, whose dances unleashed primitive sacred energies in the earth and created a new vocabulary for the human body. Baldwin’s meticulously researched, immensely readable biography puts Graham shoulder to shoulder with those other avatars of the Modern, Frank Lloyd Wright and Gertrude Stein, who created frontiers that still demand exploration.”—John Guare

“Neil Baldwin’s definitive biography of pioneering dancer Martha Graham is a compelling and brilliant study of a complicated, dedicated woman who gave everything she had to modern dance.  Baldwin reminds us what a modernist Graham was: she brought dance directly from the domination of ballet into a modern American idiom.  Baldwin brings his incisive knowledge of the stars in the panoply of modernism—from Mabel Dodge Luhan  to Lincoln Kirstein—to a dramatic narrative of Graham’s development and success.  Just as Graham made the many parts of a modern dance piece, from music to costumes, and, of course, her own brilliant vison for the piece, and performance--work together, so Neil Baldwin brings together all the elements of Graham’s colorful life, writing with wit, verve, critical discernment, and a powerful lyricism.  I greatly enjoyed this book and learned a lot.”—Mary Dearborn
Read More