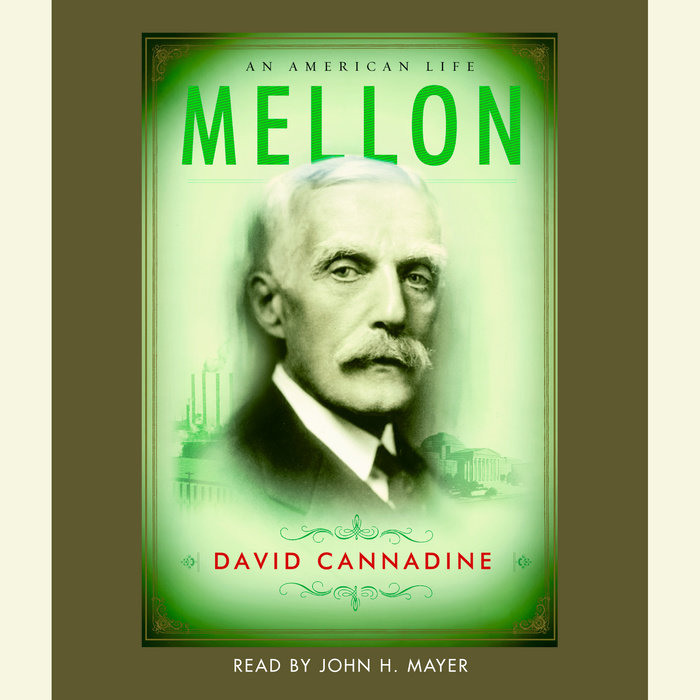 A landmark work from one of the preeminent historians of our time: the first published biography of Andrew W. Mellon, the American colossus who bestrode the worlds of industry, government, and philanthropy, leaving his transformative stamp on each.

Following a boyhood in nineteenth-century Pittsburgh, Andrew Mellon overcame painful shyness to become one of America’s greatest financiers. Across an unusually diverse range of enterprises, he would build a legendary personal fortune, tracking America’s course to global economic supremacy. Personal happiness, however, eluded him. He had been bred to do one thing, and that he did with brilliant and innovative entrepreneurship.

Mellon’s wealth and name allowed him to dominate Pennsylvania politics, and under presidents Harding, Coolidge, and finally Hoover, he made the federal government run like a business. But this man of straightforward conservative politics was no politician. He would be hailed as the architect of the Roaring Twenties, but, staying too long, would be blamed for the Great Depression, eventually to find himself a broken idol.

David Cannadine’s magisterial biography brings to life a towering, controversial figure, casting new light on our history and the evolution of our public values.
Read More
“A fascinating biography . . . A compelling portrait of a dour and lonely financier who was wounded in love, disappointed in his children and, tragically, ill-rewarded by his government . . . Mr. Canndine paints a vivid picture of 19th-century Pittsburgh as a crucible of the Industrial Revolution. Among Mellon’s customers or business partners were a Who’s Who of American tycoons . . . A sprawling work for a sprawling life.”–Roger Lowenstein, New York Times“Absorbing . . . Cannadine writes like a storyteller, and the book often reads as compulsively as one of those immense fictional sagas that weigh down the best-seller lists. Sin and redemption are always close to the center of those family tales, and so they are in Mellon . . . Cannadine has the gifted writer’s eye for a good story. He is a rarity among modern academics: a historian who writes well and has the storyteller’s instinct for exploring personality and its effect on events . . . He dares to write history as if he wants his readers to enjoy reading it . . . An interesting exploration of a man who, at first glance, seemed to exist only to be disliked.”–Russell Baker, New York Review of Books“Fascinating . . . David Cannadine has spent the past twelve years on this brilliant and reclusive figure . . . There is no easy way to sum up a figure so complex, influential, ruthless and benevolent, whose faults and virtues loom equally large . . . Cannadine has accomplished the rare feat of describing in meticulous detail the personality of someone one can admire and even feel sympathy for, who is nevertheless not very likable.”–Meryle Secrest, The Washington Post“David Cannadine has done readers on both sides of the Atlantic a great service in writing an erudite and compelling biography of a man immensely prominent in his day, virtually forgotten now, who believed, as his father did that the ‘serious business of life was business’ . . . Shows exceptional skill in describing how, late in life, Mellon became a serious collector of art.”–Stephen Graubard, Financial Times“The rehabilitation . . . [of] the Alan Greenspan of his time . . . Cannadine . . . a distinguished historian . . . enjoyed luxurious access to Mellon's records . . . The outcome: a book that delivers on the dignity and the achievements of Mellon . . . A complete biography, containing also–how could I forget to mention it? –details of Nora Mellon's adultery, Ailsa's self-absorption, and Paul Mellon's education in philanthropy. It introduces us to a man we need to know, and all there is to say is: Welcome, Andy.”–Amity Shlaes, The New York Sun“That Mellon–a painfully shy man who made Calvin Coolidge look like a jovial backslapper (the joke was that the two conversed in pauses)–could become the 1920s equivalent of a rock star is astonishing . . . Though scarcely known today, Andrew W. Mellon was a colossus in late 19th century and early 20th century America . . . David Cannadine, the distinguished British historian [gives us] a well-written, richly detailed chronicle."–Steve Forbes, Wall Street Journal“David Cannadine, our foremost historian of the British aristocracy, has painted a rich, full-length portrait, warts and all, of one of the most important plutocrats America has ever produced. It turns out the taciturn old conservative and master collector Mellon had an inner life as well as an amazing career, which Cannadine recreates with his usual thoroughness, humaneness, and wit.”–Sean Wilentz, Princeton University, author of The Rise of American Democracy: Jefferson to Lincoln “A commanding biography, unsparing in revelation, lively in its writing, rigorous in its scholarship, astute in its judgments, and altogether a major contribution to American history.”–Harold Evans, author, The American Century and They Made America “In this engaging and entertaining biography, David Cannadine paints a sweeping, vivid portrait of Andrew Mellon, a man who shaped and symbolized critical decades in the American experience. A product of the Gilded Age and a crucial figure in the politically conservative Roaring Twenties, Mellon found himself under direct attack in the years of Franklin Roosevelt's New Deal. Deeply researched and perceptively written, Cannadine's book–a story of scandal and politics, commerce and charity, art and ambition–rescues Mellon from the mists of history with grace and skill.”–Jon Meacham, author, Franklin and Winston: An Intimate Portrait of an Epic Friendship “A marvelous biography of a formidable multi-millionaire lauded as ‘the greatest secretary of the treasury since Alexander Hamilton.’ Mellon’s private life makes even livelier reading than his public career, and Cannadine’s account of how Mellon acquired one of the greatest art collections in the world is compelling. The book should immediately became a frontrunner for the coming year’s major book prizes.”–William E. Leuchtenburg, author, Franklin D. Roosevelt and the New Deal“Mellon is an extraordinary life in the fullness of all its complexity and contradictions–of a man, a family, their associates, and of America from 1850 onward.  An unvarnished portrait painted in the full light of day.”–Paul O’Neill, former Secretary of the Treasury, and author, The Price of Loyalty“This is a beautifully written, thoroughly researched, and altogether engaging portrait of a pivotal figure who has never received the biographical treatment he so richly deserves.  David Cannadine introduces us to Andrew Mellon as entrepreneur, family man, art collector, and politician and in so doing illuminates both a complex personal story and American society itself from the Gilded Age through the New Deal.”–Eric Foner, De Witt Clinton Professor of History at Columbia University, and author, Forever Free“Lavish . . . Insightful . . . Grand successes and epic failures, engrossingly recounted . . . Emphasizes the man rather than the money.”–Kirkus
Read More