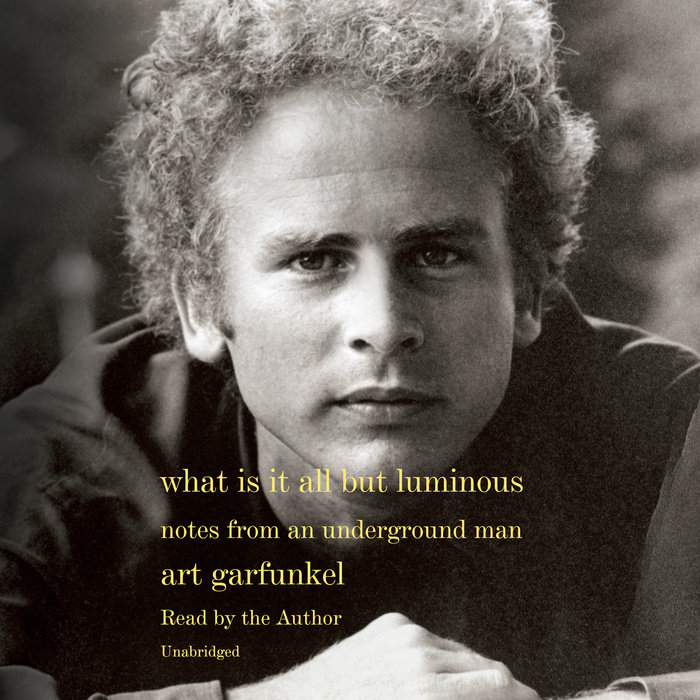 
"It's hard to imagine any single word that would accurately describe this book . . . an entertaining volume that's more fun to read than a conventional memoir might have been."
—The Wall Street Journal


"A charming book of prose and poetry printed in a digitalized version of his handwriting . . . witty, candid, and wildly imaginative . . . A highly intelligent man trying to make sense of his extraordinary life."
—Associated Press

From the golden-haired, curly-headed half of Simon & Garfunkel, a memoir (of sorts)—moving, lyrical impressions, interspersed throughout a narrative, punctuated by poetry, musings, lists of resonant books loved and admired, revealing a life and the making of a musician, that show us, as well, the evolution of a man, a portrait of a life-long friendship and of a collaboration that became the most successful singing duo in the roiling age that embraced, and was defined by, their pathfinding folk-rock music.

In What Is It All but Luminous, Art Garfunkel writes about growing up in the 1940s and ‘50s (son of a traveling salesman, listening as his father played Enrico Caruso records), a middle-class Jewish boy, living in a redbrick semi-attached house on Jewel Avenue in Kew Gardens, Queens.

He writes of meeting Paul Simon, the kid who made Art laugh (they met at their graduation play, Alice in Wonderland; Paul was the White Rabbit; Art, the Cheshire Cat). Of their being twelve at the birth of rock’n’roll (“it was rhythm and blues. It was black. I was captured and so was Paul”), of a demo of their song, Hey Schoolgirl for seven dollars and the actual record (with Paul’s father on bass) going to #40 on the charts.

He writes about their becoming Simon & Garfunkel, ruling the pop charts from the age of sixteen, about not being a natural performer but more a thinker, an underground man.

He writes of the hit songs; touring; about being an actor working with directors Mike Nichols (“the greatest of them all”), about choosing music over a PhD in mathematics.

And he writes about his long-unfolding split with Paul, and how and why it evolved, and after; learning to perform on his own . . . and about being a husband, a father and much more.
Read More

Acclaim for Art Garfunkel’s
WHAT IS IT ALL BUT LUMINOUS

"Captivating . . . Even before he met Simon, he found his voice, and not just any voice. It is perhaps one of the most magical, alluring voices in music history . . ."

"Charming and poetic; uniquely written and unconventional . . . Garfunkel can now add memoirist to his resume of singer/actor/pop culture icon."

"I was quite blown away with what a strong, beautiful and intimate memoir What Is It All But Luminous turns out to be. It is so well written and has so many wonderful little scenes and insights, delicious quirks of Art Garfunkel. I loved it; it's a very special pleasure."

“Garfunkel reveals flashes of real insight about the transcendent power of music and the inner workings of a singer’s life.”