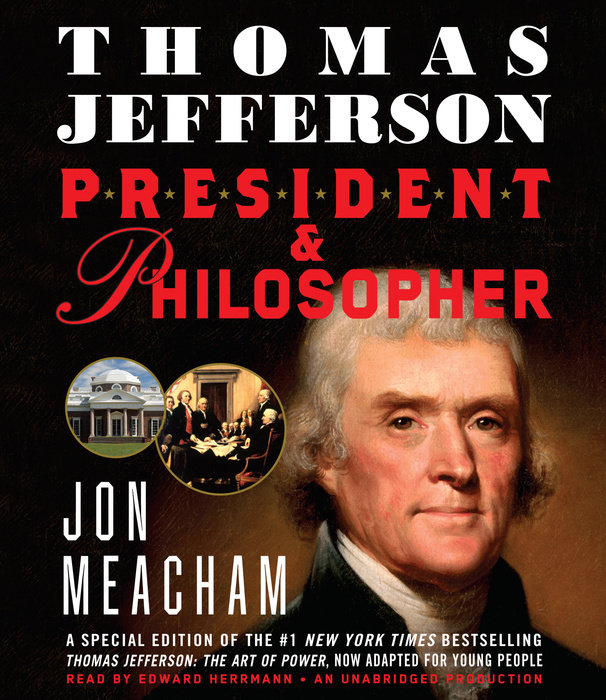 Written by: Jon Meacham
Read by: Edward Herrmann
4 Hours and 56 Minutes Imprint: Listening Library Ages 10 and up Release Date: September 09, 2014
In this special edition of the #1 New York Times bestselling Thomas Jefferson: The Art of Power by Pulitzer Prize–winning author Jon Meacham, young listeners will learn about the life and political philosophy of one of our Founding Fathers.

Thomas Jefferson was the third president of the United States. He was one of the authors of the Declaration of Independence. But he was also a lawyer and an ambassador, an inventor and a scientist. He had a wide range of interests and hobbies, but his consuming interest was the survival and success of the United States.

This audiobook contains a note from Meacham, as well as sections throughout the text about subjects such as the Boston Tea Party, the Library of Congress, and Napoléon Bonaparte. Additional materials include a timeline; a family tree; a Who’s Who in Jefferson’s world; sections on Jefferson’s original writings and correspondence, “inventions,” interests, places in Jefferson’s world, finding Jefferson in the United States today, additional reading, organizations, and websites; notes; a bibliography; and an index. This adaptation, ideal for those interested in American presidents, biographies, and the founding of the American republic, is an excellent example of informational writing and reflects Meacham’s extensive research using primary source material.

Includes a bonus PDF of timelines, writings, and a bibliography.
Read More