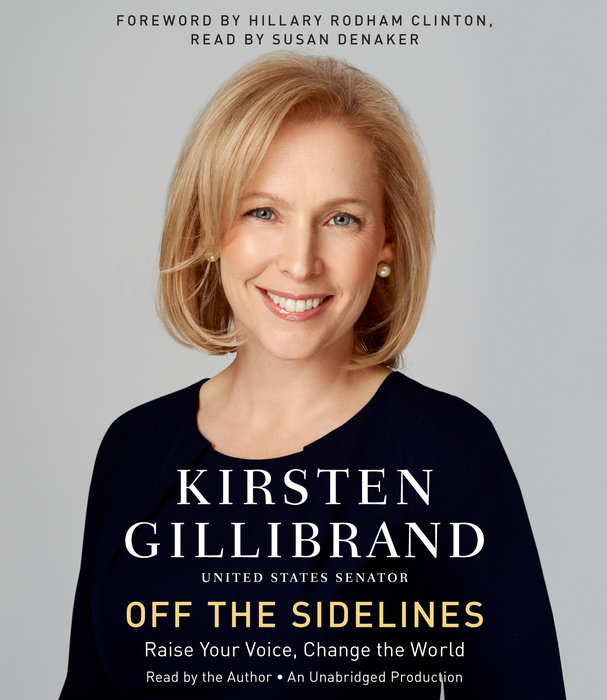 “One of the most helpful, readable, down-to-earth, and truly democratic books ever to come out of the halls of power.”—Gloria Steinem

Off the Sidelines is a playbook for women who want to step up, whether in Congress or the boardroom or the local PTA. If women were fully represented in politics, Gillibrand says, national priorities would shift to issues that directly impact them: affordable daycare, paid family medical leave, and equal pay. Pulling back the curtain on Beltway politics, she speaks candidly about her legislative successes (securing federally funded medical care for 9/11 first responders, repealing Don’t Ask, Don’t Tell) and her crushing disappointments (failing by five votes to pass a bill protecting survivors of sexual assault in the military).

Gillibrand also shares stories of growing up the daughter and granddaughter of two trailblazing feminists in a politically active family in Albany, New York, and retraces her nonlinear path to public office. She lays bare the highs and lows of being a young (pregnant!) woman in Congress, the joys and sacrifices every working mother shares, and the support system she turns to in her darkest moments: her husband, their two little boys, and lots of girlfriends.

In Off the Sidelines, Gillibrand is the tough-love older sister and cheerleader every woman needs. She explains why “ambition” is not a dirty word, failure is a gift, listening is the most effective tool, and the debate over women “having it all” is absurd at best and demeaning at worst. In her sharp, honest, and refreshingly relatable voice, she dares us all to tap into our inner strength, find personal fulfillment, and speak up for what we believe in.

Praise for Off the Sidelines

“Gillibrand has written a handbook for the next generation of women to redefine their role in our world.”—Arianna Huffington

“There are moments of immensely appealing self-disclosure that seldom appear in other books of this genre. . . . This isn’t your mother’s political memoir.”—The New York Times Book Review
Read More
“Kirsten Gillibrand has written a handbook for the next generation of women to redefine their role in our world. With Off the Sidelines, Gillibrand shows that it’s not about getting to the top, or choosing between career and family—it’s simply about getting involved. In politics, in our communities, or simply mentoring somebody: When women work together, we all win.”—Arianna Huffington, editor in chief of The Huffington Post and author of Thrive

“There are moments of immensely appealing self-disclosure that seldom appear in other books of this genre. . . . This isn’t your mother’s political memoir.”—The New York Times Book Review

“Reading Kirsten Gillibrand’s book makes me so proud—as a woman, as an American, and as her friend. She is a beautiful example of what we can become when we are true to ourselves and brave enough to let our voices be heard. This book is intimately honest and deeply insightful. It should be on every girl’s and every woman’s reading list, and every boy’s and man’s, too.”—Connie Britton

“What do you get when a woman is the third generation of fierce, kindhearted, and brilliant political activists? You get Senator Kirsten Gillibrand, who writes irresistibly, helps in real-life terms, and uses her clout to get more women elected. Off the Sidelines is one of the most helpful, readable, down-to-earth, and truly democratic books ever to come out of the halls of power.”—Gloria Steinem

“Since joining the Senate in 2009, Kirsten Gillibrand has been a fearless advocate for women. . . . Now, she’s turning her attention to getting women involved—a powerful message delivered in her new memoir.”—Marie Claire

“With her new memoir, Sen. Kirsten Gillibrand seems to be taking a page out of the presidential playbook. . . . In style, however, Gillibrand’s book differs significantly from previous political memoirs. Hers is a quick read, chatty, candid.”—The Washington Post

“In her poignant new memoir, Off the Sidelines, Senator Kirsten Gillibrand gives a voice to our nation’s unsung heroes—and shares how any one of us can help change our world.”—Good Housekeeping

“Senator Kirsten Gillibrand, in offering this compellingly personal account of her journey to the U.S. Senate, fulfills a vital public purpose. Writing in a voice that is honest, funny, blunt, and strong, she urges women to get off the sidelines and start changing the world.”—Sheryl Sandberg, COO of Facebook and founder of LeanIn.Org

“My good friend Kirsten Gillibrand has written a book that is just like her: bold, impactful, and inspiring. In these pages, women will learn what is possible when we find the courage and ambition to lead.”—Gabrielle Giffords

“Senator Kirsten Gillibrand’s story will prove instructive to anyone who wishes to find her true north, understand power dynamics, and confront entrenched interests when justice is not served. Off the Sidelines is required reading for all women who want to change the world and recognize that to do so they must better understand political realities.”—Piper Kerman, author of Orange Is the New Black

“Kirsten Gillibrand is one of the most forward-focused leaders we have working on our behalf, and Off the Sidelines is an excellent example of inspiring women to make their voices heard.”—Billie Jean King

“A must-read for every woman looking to effect change. Gillibrand’s secrets to speaking up—whether you’re striving for political office, aiming for the boardroom, or simply trying to improve your kid’s school—are powerful lessons for women looking to make a difference. After all, if you’ve worked hard enough to gain a seat at the table but you say nothing, that’s a lost opportunity.”—Ursula Burns, chairman and CEO, Xerox Corporation

“Senator Gillibrand is a vibrant role model for her generation and makes a strong and very personal case for why we should all care about our government. Her trademark honesty and humor speak loudly to why we need women in the game.”—Geraldine Laybourne, founder, Oxygen Media and Kandu
Read More 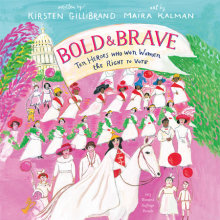