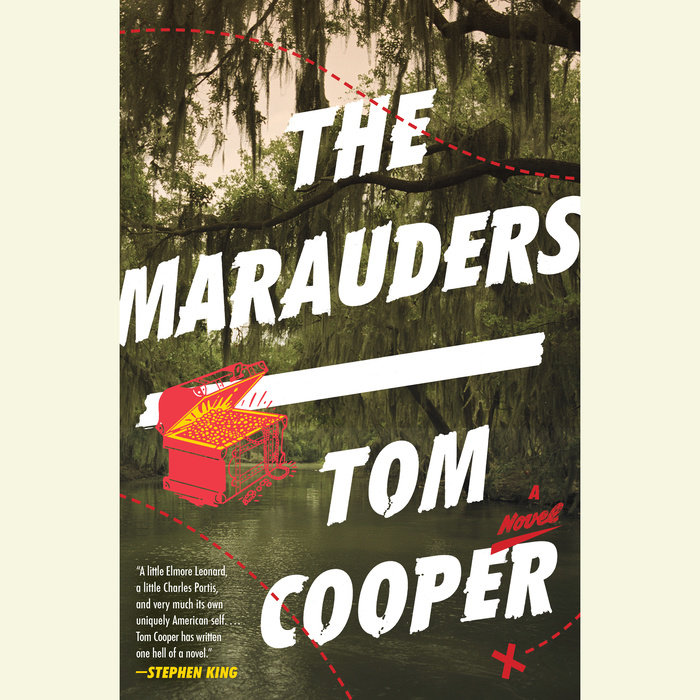 When the BP oil spill devastates the Gulf coast, those who made a living by shrimping find themselves in dire straits. For the oddballs and lowlifes who inhabit the sleepy, working class bayou town of Jeannette,  these desperate circumstances serve as the catalyst that pushes them to enact whatever risky schemes they can dream up to reverse their fortunes. At the center of it all is Gus Lindquist, a pill-addicted, one armed treasure hunter obsessed with finding the lost treasure of pirate Jean Lafitte. His quest brings him into contact with a wide array of memorable characters, ranging from a couple of small time criminal potheads prone to hysterical banter, to the smooth-talking Oil company middleman out to bamboozle his own mother, to some drug smuggling psychopath twins, to a young man estranged from his father since his mother died in Hurricane Katrina. As the story progresses, these characters find themselves on a collision course with each other, and as the tension and action ramp up, it becomes clear that not all of them will survive these events.
Read More
"Sad, grotesque, hilarious, breathtaking...stands with ease among the work of such stylistic predecessors as Twain, Carl Hiaasen and Elmore Leonard. One thing that gives “The Marauders” its own clear hallmark is its quicksilver prose. The book’s other standout aspect is how it demands and earns sympathy for all but its most evil characters and for the fate-blasted but nature-blessed locale they inhabit. You might not want to retire there, but you’ll savor this visit." - The Wall Street Journal

“It’s always the voice, the singular sound of a place like none other, that draws you into a regional mystery. In Tom Cooper’s first novel, The Marauders, that beguiling music comes out of the Louisiana bayous, where a raucous chorus of shrimp fishermen, marijuana growers, treasure hunters, professional crooks and common thieves fight to be heard…It hurts to laugh at the preposterous get-rich-quick schemes of these swamp denizens, but laugh we must, if only to find some relief from the grim realism of Cooper’s portrait of life in these coastal communities.” – The New York Times Book Review

"The first great book of the 2015 beach season is already here...Tom Cooper’s début novel, “The Marauders,” certainly should not be confined to beach season or to the implication that it’s light or airless good fun, but it seems to be a book that should be savored on a deck overlooking the beach or pool with a cold beer nearby,,,an enjoyable and impossibly difficult to put down novel.” - Free Lance Star Review

“Tom Cooper has Louisiana dead to rights. Every aspect. Jeanette, the sleepy bayou town ravaged by man and nature alike, is rendered in Technicolor detail. Its residents, lifers and visitors alike, leap from the pages. The story rolls like a tide, handling triumph and tragedy alike with a dark, mischievous humor that Cooper wields expertly…There’s more than a hint of the Southern gothic here, more than a little Flannery O’Connor…It’s easy to forget this is his first novel. Some books require boxes of tissues. This one requires an, as Cooper writes, “an ass-pocket whiskey bottle.” Get you a drink and get comfortable. You won’t be moving until you hit the last page.” - The Advocate

"A debut novel that does nothing in half measures. It isn’t afraid to take risks, dabble in darkness and skirt the edge of ruin, and this is what makes it such an exciting read…The Marauders takes readers on a rollicking adventure deep into the heart of Louisiana’s marshes as well as some of the darkest corners of the human psyche…The plot is brisk, the characters are captivating and the writing is lush and striking. Cooper’s writing is the kind a reader can happily get lost in, and his depictions of the Deep South are so evocative that if he ever gets tired of fiction, he might give travel writing a try. But The Marauders is such an impressive offering from an audacious new voice in fiction that one can only hope it is but the first of many. As far as bibliophilic treasure hunts go, this one is literary gold.” - Bookpage

Cooper’s intricate, accessible weaving of his characters with each other, and his deep, delightfully eccentric descriptions of this area of Louisiana show that he’s just beginning what will hopefully be a satisfying career as a novelist - Bookbrowse

"The Marauders is so damned good you won't believe it's a first novel…and by the time you reach page 20, you won't care. It's rollicking, angry, eye-popping, and fall-on-the-floor funny, sometimes in the course of a single scene. The cast is winning, the post-Katrina bayou setting is richly evoked, the dialogue crackles, and the story rolls on a wave of invention. It's a little Elmore Leonard, a little Charles Portis, and very much its own uniquely American self. Basically, Tom Cooper has written one hell of a novel." - Stephen King

"Wade into moral muck with the pill-popping, treasure-hunting, one-armed hero of this finger-lickin'-good Louisiana swamp noir." - O, The Oprah Magazine

"A sometimes hilarious, sometimes heartbreaking "swamp noir" gumbo with echoes of John Kennedy Toole, Larry Brown and Daniel Woodrell…The Marauders is as grounded in the simple truth as it is awash in the outlandishly eccentric." - Shelf Awareness

"I can't wait for Cooper's next book. Nor can my wife, and she and I seldom agree about novels. He's fun to read--he keeps your head up and your eyes big." - Garden and Gun

"Self-assured and highly entertaining...Cooper’s writing is taut, his story is gripping, and the characters and their problems will stay with you long after you finish this book." - Library Journal, *Starred* Review

“This is one hell of a debut novel. Cooper combines the rough-hewn but poetic style favored by writers like Charles Willeford with the kinds of miscreants so beloved by Elmore Leonard, all operating in the tumultuous modern-day disaster that is New Orleans.. With crisp, noir-inspired writing and a firmly believable setting, Cooper has written an engaging homage to classic crime writing that still finds things to say about the desperate days we live through now. Somewhere, Donald E. Westlake, John D. MacDonald and Elmore Leonard are smiling down on this nasty, funny piece of work.” —Kirkus Reviews, *Starred* Review

“Cooper offers a believable portrait of a bayou town and a cast of deeply engaging characters wrestling inchoately with the likely extinction of the only life they know. There is real substance and humanity in this fine debut novel.”—Booklist, *Starred* Review

“Cooper’s novel is a blast; descriptions of the natural beauty of the cypress swamps and waterways, along with the hardscrabble ways of its singular inhabitants, further elevate this story.” - Publisher's Weekly

"Tom Cooper expertly maps a Gulf Coast of miscreants, romantics, and a severely beleaguered nature, digging at the old, weird south with his own enthralling voice. 'Marauders' is propelled by wonderful characters depicted with grace, humanity, and that rarest of talents: a truly hilarious wit. Mr. Cooper joins such talents as Twain, Portis, and O'Toole in mining the humor of the Southern freak show to deliver the universal news of the human heart." --Nic Pizzolatto, author of Galveston and creator of HBO's 'True Detective'

"This is rare for me, very rare, that I was utterly unable, because of a novel, to get up from a chair and answer the phone when it rang or eat when I was hungry or go to bed when I was weary. Rare, but this book has left me hungry and sleepy and neglectful of somebody I hope will call back. That his book is smart and funny and dazzling in its prose is obvious. He also can tell a hell of a story. Tom Cooper is a newly-minted American literary treasure." - Robert Olen Butler

The Marauders, Tom Cooper's beautifully-written chronicle of the misadventures of the denizens of a dying Louisiana fishing village, pleases in so many ways. It's funny, sad, and wise, sometimes in the same sentence. An outstanding debut.
--Richard Lange Author of Angel Baby, This Wicked World

“The very best fiction transports us effortlessly to places we've never been and involves us deeply with characters we've never met; and though I've never lived in the Louisiana bayous, or shrimped all day with one arm in oil-polluted waters, or obsessed over a dead pirate's treasure while chewing up painkillers like candy, or been hunted by anyone as sadistic as the Toup brothers, Tom Cooper's brilliant, fast-paced first novel, The Marauders, took me there, set me right down in the miserable heat and the mud and the dread, and, though it might sound strange to say, I will be forever grateful to him for that. “ – Donald Ray Pollock, author of Knockemstiff and the Devil all the Time

“The Marauders is a novel so compelling, so unsettling, so scary and hilarious that you won’t be able to put it down. You might as well pour yourself a drink and settle into your comfy chair. Set in Louisiana’s Barataria swamp after the ecological disaster that was the BP oil spill, the novel chronicles the end of a way of life for Gulf shrimpers and explores a muddy world of greed, grit, and gumbo. Tom Cooper is an eloquent new voice in the extraordinary world of Southern fiction. And, trust me on this, the spectral and relentless Toup brothers will haunt your dreams.” - John Dufresne, bestselling author of Louisiana Power & Light

“Tom Cooper has written a first novel with sustained, top-drawer prose, and that is a beautiful and uncommon thing.” – Pete Dexter, national book award-winning author of Paris Trout
Read More 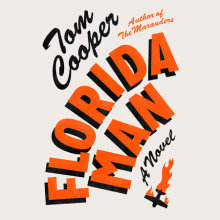