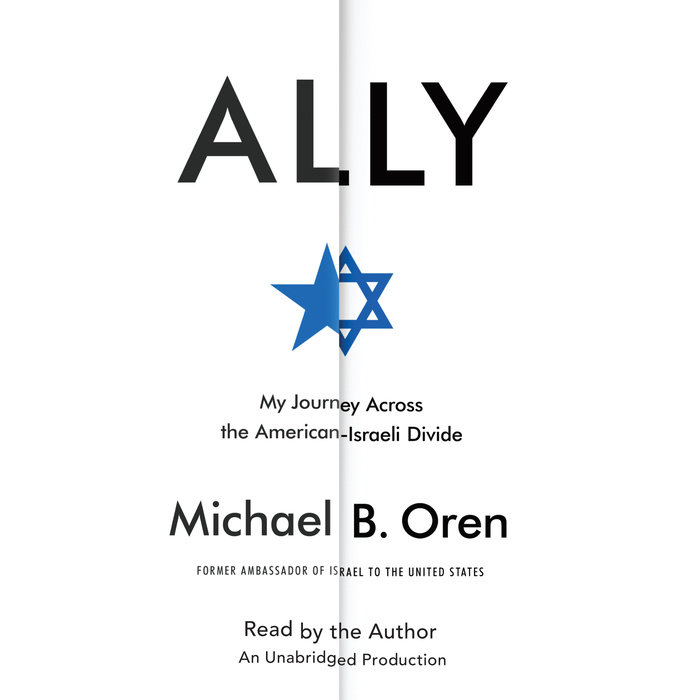 Michael B. Oren’s memoir of his time as Israel’s ambassador to the United States—a period of transformative change for America and a time of violent upheaval throughout the Middle East—provides a frank, fascinating look inside the special relationship between America and its closest ally in the region.

Michael Oren served as the Israeli ambassador to the United States from 2009 to 2013. An American by birth and a historian by training, Oren arrived at his diplomatic post just as Benjamin Netanyahu, Barack Obama, and Hillary Clinton assumed office. During Oren’s tenure in office, Israel and America grappled with the Palestinian peace process, the Arab Spring, and existential threats to Israel posed by international terrorism and the Iranian nuclear program. Forged in the Truman administration, America’s alliance with Israel was subjected to enormous strains, and its future was questioned by commentators in both countries. On more than one occasion, the friendship’s very fabric seemed close to unraveling.

Ally is the story of that enduring alliance—and of its divides—written from the perspective of a man who treasures his American identity while proudly serving the Jewish State he has come to call home. No one could have been better suited to strengthen bridges between the United States and Israel than Michael Oren—a man equally at home jumping out of a plane as an Israeli paratrooper and discussing Middle East history on TV’s Sunday morning political shows. In the pages of this fast-paced book, Oren interweaves the story of his personal journey with behind-the-scenes accounts of fateful meetings between President Obama and Prime Minister Netanyahu, high-stakes summits with the Palestinian leader Mahmoud Abbas, and diplomatic crises that intensified the controversy surrounding the world’s most contested strip of land.

A quintessentially American story of a young man who refused to relinquish a dream—irrespective of the obstacles—and an inherently Israeli story about assuming onerous responsibilities, Ally is at once a record, a chronicle, and a confession. And it is a story about love—about someone fortunate enough to love two countries and to represent one to the other. But, above all, this memoir is a testament to an alliance that was and will remain vital for Americans, Israelis, and the world.

“The smartest and juiciest diplomatic memoir that I’ve read in years, and I’ve read my share. . . . The best contribution yet to a growing literature—from Vali Nasr’s Dispensable Nation to Leon Panetta’s Worthy Fights—describing how foreign policy is made in the Age of Obama.”—Bret Stephens, The Wall Street Journal

“Provocative . . . Oren’s book offers a view into the deep rifts that have opened not only between Washington and Jerusalem, but also between Israeli and American Jews.”—Newsweek

“[Oren is] one of the most uniquely qualified judges of this ever more crucial special relationship.”—The Washington Times

“The diplomatic equivalent of a ‘kiss-and-tell’ memoir . . . informative and in parts entertaining.”—Financial Times

“The talk of Washington and Jerusalem . . . an ultimate insider’s story.”—New York Post
Read More
“Michael Oren, Israel’s former ambassador to the United States, has written the smartest and juiciest diplomatic memoir that I’ve read in years, and I’ve read my share. The book, called Ally, has the added virtues of being politically relevant and historically important. This has the Obama administration—which doesn’t come out looking too good in Mr. Oren’s account—in an epic snit. . . . [Oren’s] memoir is the best contribution yet to a growing literature—from Vali Nasr’s Dispensable Nation to Leon Panetta’s Worthy Fights—describing how foreign policy is made in the Age of Obama: lofty in its pronouncements and rich in its self-regard, but incompetent in its execution and dismal in its results. Good for Mr. Oren for providing such comprehensive evidence of the facts as he lived them.”—Bret Stephens, The Wall Street Journal

“Illuminating . . . Oren was by no means Netanyahu’s most truculent adviser, but his personal odyssey exemplifies the shift from a liberal and secular Zionism to a more belligerent nationalism.”—The New York Times

“Unlike other diplomatic memoirs, which rarely disclose anything controversial, Oren’s Ally: My Journey Across the American-Israeli Divide is provocative, as the former ambassador blames President Barack Obama for the sorry state of U.S.-Israel relations and much else that’s wrong in the Middle East today. . . . Oren’s book offers a view into the deep rifts that have opened not only between Washington and Jerusalem, but also between Israeli and American Jews.”—Newsweek

“A book full of penetrating insights . . . [Oren’s] beguiling, surprisingly frank memoir not only gives us the reality of what achieving his dream entailed, but tells us what he went through in order to get there. . . . It is the product not only of Mr. Oren’s challenging ambassadorial tenure in Washington but of a life well lived as an Israeli and as an American, a combination which makes him one of the most uniquely qualified judges of this ever more crucial special relationship.”—The Washington Times

“Oren has written the diplomatic equivalent of a ‘kiss-and-tell’ memoir, chronicling his years as Israel’s ambassador. . . . It is less sensational than the parts cherry-picked before publication. Yet it is informative and in parts entertaining. . . . The book is a useful account, if partial and partisan, of a unique time in US-Israeli relations, in which officials of both are criticizing each other with increasing bluntness.”—Financial Times

“The talk of Washington and Jerusalem . . . I’m not sure that in the annals of diplomatic history there’s ever been anything quite like this astonishing account of Oren’s four years as Israel’s ambassador in Washington. It’s an ultimate insider’s story told while all the players save Oren are still in place.”—New York Post

“Ally is an important read for those seeking to understand the complexities of the American-Israeli alliance. Unlike his previous two books, which were written from the perspective of an historian and became New York Times bestsellers, former Israeli ambassador Michael Oren’s latest book is based on his own personal experiences, perceptions and interactions with President Obama and the administration.”—The Huffington Post
Read More