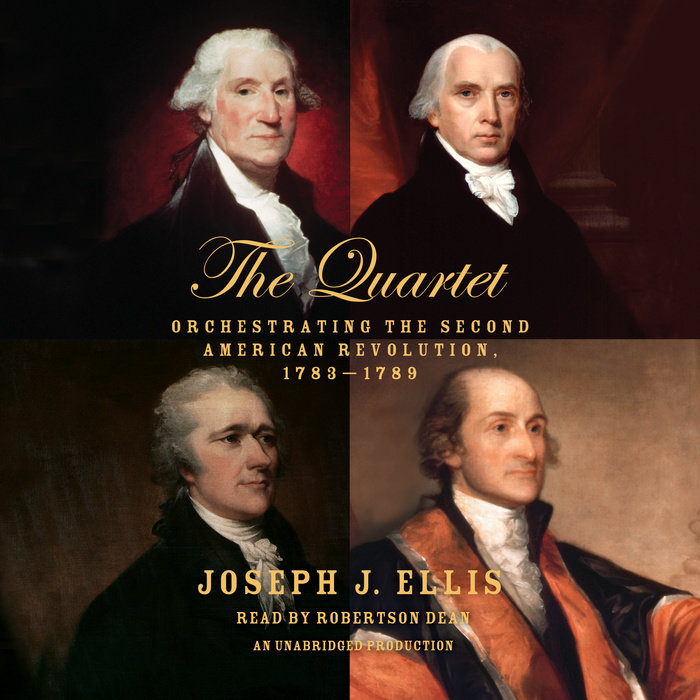 We all know the famous opening phrase of Lincoln’s Gettysburg Address: “Four score and seven years ago our fathers brought forth on this Continent a new Nation.” The truth is different. In 1776, thirteen American colonies declared themselves independent states that only temporarily joined forces in order to defeat the British. Once victorious, they planned to go their separate ways. The triumph of the American Revolution was neither an ideological nor a political guarantee that the colonies would relinquish their independence and accept the creation of a federal government with power over their autonomy as states.

The Quartet is the story of this second American founding and of the men most responsible—George Washington, Alexander Hamilton, John Jay, and James Madison. These men, with the help of Robert Morris and Gouverneur Morris, shaped the contours of American history by diagnosing the systemic dysfunctions created by the Articles of Confederation, manipulating the political process to force the calling of the Constitutional Convention, conspiring to set the agenda in Philadelphia, orchestrating the debate in the state ratifying conventions, and, finally, drafting the Bill of Rights to assure state compliance with the constitutional settlement.

Ellis has given us a gripping and dramatic portrait of one of the most crucial and misconstrued periods in American history: the years between the end of the Revolution and the formation of the federal government. The Quartet unmasks a myth, and in its place presents an even more compelling truth—one that lies at the heart of understanding the creation of the United States of America.
Read More
The Wall Street Journal
“The dissenters—George Washington, Alexander Hamilton, John Jay and James Madison—faced no less a task than redefining the meaning of the War for Independence in what amounted to a Second American Revolution. How they did so is the burden of the Pulitzer Prize-winning historian Joseph Ellis' The Quartet, an engaging reconsideration of the arduous path to the Constitution.”

The Economist
“The author is a sure-handed and entertaining guide through the thickets of argument, personality and ideology out of which the American nation emerged.”

Star Tribune
“Ellis shows the extraordinary capacity of these four leaders to understand the events, discuss them dispassionately, explain them to the American people, reach compromise, rise above pettiness and sacrifice personal wealth, power and popularity for the long-term public good. Given the rarity of these qualities today, Ellis’ book is a compelling reminder of the political virtues that created the American republic.”

Newsday
“Ellis lives and breathes the Founders, and he deploys his customary zip and trenchant scholarship in showing how four central figures—Washington, John Jay, Alexander Hamilton and James Madison—conceived and promoted a new political framework built on the Constitution."

The Boston Globe
“This is more than just a reinterpretation of a vital transition in our history; it is a reflection of new material from an episode that occurred two and a quarter centuries ago... Having set forth the analysis, Ellis plunges into the narrative. His is an inviting voice and his story compelling, built around irresistible figures who, as the annual publishing lists amply display, retain their appeal in our own time.”

Miami Herald
“The Quartet achieves its purpose, providing a clear explanation of how the real United States of America came into being.”

St. Louis Post Dispatch
“Ellis, who won the Pulitzer Prize in 2001 for Founding Brothers, reminds us that what Catherine Drinker Bowen has called the “Miracle at Philadelphia” wasn’t destiny or ordained by God. It was created by perceptive men who understood human nature, history and politics and could foresee what this country could become should its people choose to have a strong central government.”

Richmond Times Dispatch
“An author who breathes life into the dead and immediacy into the past, Ellis illuminates America’s rebirth, the men who made it possible and the framework they created. With rich research and intelligent interpretation, “The Quartet” burnishes his reputation as a writer, a thinker and a humanist.”

Shelf Awareness
“Absorbing in its details, and convincing in its arguments, The Quartet is sure to appeal to history nerds and American politicos. As another election season approaches, a look back at the creation of the government, and the reasons why these founding fathers did what they did, is sure to be engrossing reading for anyone.”

Kirkus (starred review)
“A brilliant account of six years during which four Founding Fathers, ‘in disregard of public opinion, carried the American story in a new direction.’ In a virtuosic introduction, Pulitzer Prize and National Book Award winner Ellis maintains that Abraham Lincoln was wrong. In 1776—four score and seven years before 1863—our forefathers did not bring forth a new nation….Ellis reminds us that the 1776 resolution declaring independence described 13 ‘free and independent states.’ Adopting the Constitution in 1789 created the United States, but no mobs rampaged in its favor….Ellis delivers a convincing argument that it was a massive political transformation led by men with impeccable revolutionary credentials….This is Ellis’ ninth consecutive history of the Revolutionary War era and yet another winner.”
Read More