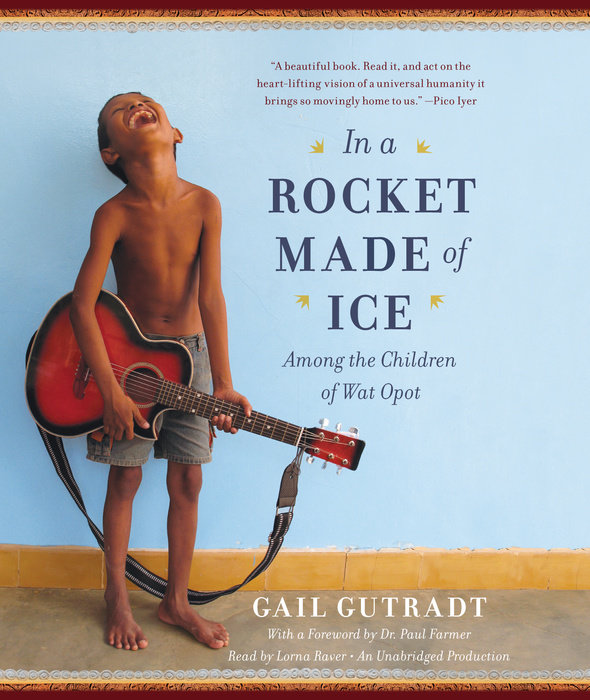 Written by: Gail Gutradt
Read by: Lorna Raver
12 Hours and 7 Minutes Imprint: Random House Audio Genre: Biography & Autobiography - Personal Memoirs Release Date: August 12, 2014
A beautifully told, inspiring true story of one woman’s volunteer experiences at an orphanage in rural Cambodia—a book that embodies the belief that love, compassion, and generosity of spirit can overcome even the most fearsome of obstacles.

Gail Gutradt was at a crossroads in her life when she learned of the Wat Opot Children’s Community. Begun with just fifty dollars in the pocket of Wayne Dale Matthysse, a former Marine Corps medic in Vietnam, Wat Opot, a temple complex nestled among Cambodia’s verdant rice paddies, was once a haunted scrubland that became a place of healing and respite where children with or orphaned by HIV/AIDS could live outside of fear or judgment, and find a new family—a place that Gutradt calls “a workshop for souls.”

Disarming, funny, deeply moving, In a Rocket Made of Ice gathers the stories of children saved and changed by this very special place, and of one woman’s transformation in trying to help them. With wry perceptiveness and stunning humanity and humor, this courageous, surprising, and evocative memoir etches the people of Wat Opot forever on your heart.
Read More
“A wrenching memoir of the time Gutradt spent volunteering at Wat Opot, a residence for Cambodian children and teens living with HIV and AIDS.” —Sarah Meyer, O, The Oprah Magazine

“A testament to the thriving life in Wat Opot can be found in Gutradt’s powerful book. With patience, compassion, and an eye for the poetic, Gutradt’s memoir of her time as a volunteer at Wat Opot beautifully captures the heart behind the heavy circumstances that bring the community’s residents together.” —Joe Muscolino, Everyday eBook

“This might have been one of the saddest stories ever told. Instead, it is an interesting and often uplifting one [that] also offers universal lessons in compassion. The book is based on the personal journal of Gutradt, an American who has worked over the years as a volunteer at a tiny orphanage in rural Cambodia . . . Much of In a Rocket Made of Ice is devoted to sketches of the many children the author has met and grown to love, the stories enhanced by photos taken by the author . . . Gutradt writes sensitively, sometimes lyrically . . . As director of the community, Wayne Matthysse is a constant presence that binds together both Wat Opot and Gutradt’s narrative. He is a complicated man [who] considers his work atonement for the deaths of two children he witnessed [while he was] in the Vietnam War. He has a highly individualistic moral sense . . . In a Rocket Made of Ice concludes on an up-note, with stories of children who are now in their teens or early 20s. Wayne is helping them obtain educations, find jobs and learn to live ‘on the outside,’ separate from their Wat Opot family. Compared with the early days of the orphanage, these are welcome challenges. Some people need to travel far from home to find their calling—Gutradt appears to be one of them.” —Melanie Kirkpatrick, The Wall Street Journal

“Affecting and deeply felt . . . Part journalism, part memoir, In a Rocket Made of Ice is Gutradt’s story of her four stays at Wat Opot from 2005 to 2012, and the empathy, selflessness, humor and willpower she was met with at every turn. Where once Wat Opot’s purpose was to see HIV+ children and adults through to their inevitable deaths, the compound has since hummed to life . . . Despite the tragic circumstances that bring people to Wat Opot, the community roars with positivity and laughter.” —Joe Muscolino, Biographile

“An extraordinary book about an extraordinary place . . . Gutradt, a Maine native who has spent several stints volunteering at Wat Opot, paints an achingly beautiful portrait of [Wat Opot], which may not have many material resources, but is imbued with a much-needed sense of family for children who have been orphaned by AIDS . . . The ultimate goal of Wat Opot is not just to get kids healthy, but to instill in them a belief that they can live and thrive among other Cambodians, where the stigma of HIV and AIDS lingers. Many of the children go on to university, a testament to the powerful work being done on a shoestring and a prayer. Gutradt has given us an inspiring, unforgettable book.” —Amy Scribner, BookPage

“Neither sentimental nor solicitous, Gutradt’s memoir of her work in a small Cambodian community is a compassionate window into both their lives and hers.” —Bruce Jacobs, Shelf Awareness

“Gutradt takes readers into the Cambodian community of Wat Opot, where children who suffer from HIV or have lost their parents to the virus are cared for by a dedicated group of volunteers. Led by charismatic Vietnam veteran Wayne Matthysse, Wat Opot is recognized by UNICEF and other international agencies for the work it does on this most human of scales: by making sure otherwise overlooked children are fed, clothed, educated, and loved. Gutradt is clearly enamored with the work done here, and her deep affection and admiration for Matthysse are obvious . . . The good work being done at Wat Opot is admirable and to be emulated, and Gutradt writes effectively about how she’s been transformed by her association with this important place and the many delightful children who live there.” —Colleen Mondor, Booklist

“Moving, insightful . . . The story of a tiny community in Cambodia where children whose lives have been shattered by AIDS are cared for, educated and raised to live full lives in the outside world . . . Gutradt first volunteered in Wat Opot in 2005 and returned there multiple times . . . Her many photographs of the youngsters are appealing; her warm stories generally avoid sentimentality: the needy children are not angels, and as they grow, they sometimes present truly tough problems for those concerned about their welfares and futures. Gutradt also discusses the problems created by unreliable government agencies and well-intentioned but uninformed do-gooders. A refreshing account of generous people devoting their time and energy to doing something right.” —Kirkus

“Wat Opot is a community that not only saves the lives of its residents but enriches our lives through its lessons in generosity, empathy, and resilience. Before I read Gail Gutradt’s moving account, I had never heard of it. Now I will never forget it.” —Anne Fadiman, author of The Spirit Catches You and You Fall Down

“It’s hard not to fall in love with the author, the subjects, and the message of this beautiful book of stories and photographs. The warmth, the thoughtfulness, the writerly craft Gail Gutradt brings to an orphanage in Cambodia—and the stories and people she finds there—teach us not only about wisdom and compassion, but also about how to give our lives meaning, right now. Read it, and act on the heart-lifting vision of a universal humanity it brings so movingly home to us.” —Pico Iyer

“This is an inspiring, first-hand account of personal sacrifice to help dying children, an insight into courage, and a vivid portrait of life in rural Cambodia.” —Alan Lightman, author of Einstein’s Dreams

“Much more than a story of hope in the face of grim news and chronic disappointment, Gutradt makes a compelling case for the efficacy of ingenuity, imagination, and a commitment to human dignity in accompanying each other through adversity.” —Dr. Paul Farmer