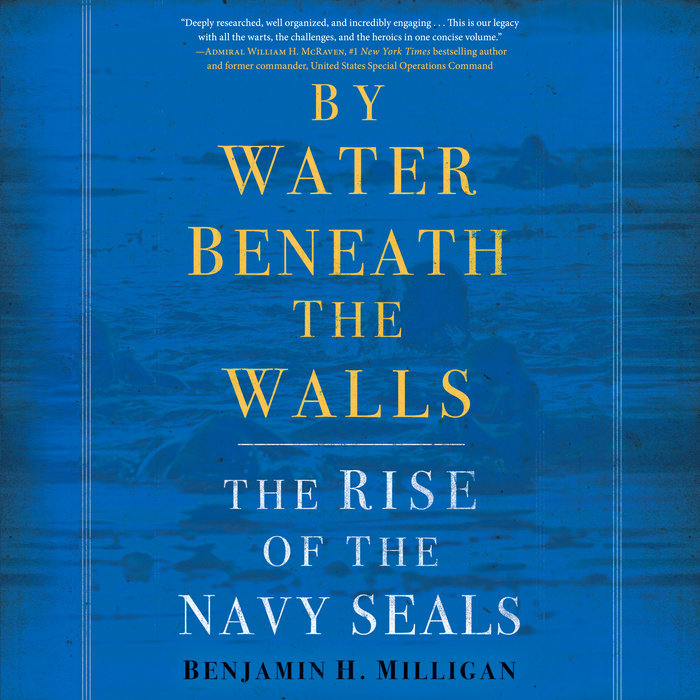 Written by: Benjamin H. Milligan
Read by: Kaleo Griffith
22 Hours and 47 Minutes Imprint: Random House Audio Genre: Biography & Autobiography - Military Release Date: July 20, 2021
A gripping history chronicling the fits and starts of American special operations and the ultimate rise of the Navy SEALs from unarmed frogmen to elite, go-anywhere commandos—as told by one of their own.

“Deeply researched, well organized, and incredibly engaging . . . This is our legacy with all the warts, the challenges, and the heroics in one concise volume.”—Admiral William H. McRaven, #1 New York Times bestselling author and former commander, United States Special Operations Command

How did the US Navy—the branch of the US military tasked with patrolling the oceans—ever manage to produce a unit of raiders trained to operate on land? And how, against all odds, did that unit become one of the world’s most elite commando forces, routinely striking thousands of miles from the water on the battlefields of Iraq, Afghanistan, Syria, even Central Africa?

Behind the SEALs’ improbable rise lies the most remarkable underdog story in American military history—and in these pages, former Navy SEAL Benjamin H. Milligan captures it as never before.

Told through the eyes of remarkable leaders and racing from one longshot, hair-curling raid to the next, By Water Beneath the Walls is the tale of the unit’s heroic naval predecessors, and the evolution of the SEALs themselves. But it’s also the story of the forging of American special operations as a whole—and how the SEALs emerged from the fires as America’s first permanent commando force when again and again some other unit seemed predestined to seize that role.

Here Milligan thrillingly captures the outsize feats of the SEALs’ frogmen forefathers in World War II, the Korean War, and elsewhere, even as he plunges us into the second front of interservice rivalries and personal ambition that shaped the SEALs’ evolution.

In equally vivid, masterful detail, he chronicles key early missions undertaken by units like the Marine Raiders, Army Rangers, and Green Berets, showing us how these fateful, bloody moments helped create the modern American commando—even as they opened up pivotal opportunities for the Navy.

Finally, he takes us alongside as the SEALs at last seize the mantle of commando raiding, and discover the missions of capture/kill and counterterrorism that would define them for decades to come.

Written with the insight that can only come from a combat veteran and a member of the book’s tribe, By Water Beneath the Walls is an essential new history of the SEAL teams, a crackling account of desperate last stands and unforgettable characters accomplishing the impossible—and a riveting epic of the dawn of American special operations.
Read More
“Deeply researched, well organized, and incredibly engaging, By Water Beneath the Walls is one of the finest histories I’ve read about the formation and rise of the Navy SEALs. This is our legacy with all the warts, the challenges, and the heroics in one concise volume.”—Admiral William H. McRaven, former commander, United States Special Operations Command, and #1 New York Times bestselling author of Make Your Bed

“Fascinating . . . Written with gusto and based on years of research, this history spans eight decades. Fast-paced and packed with colorful personalities and close-quarters gunfights, it vividly details the lineage of the SEALs. This tour de force confirms what we all suspected: SEALs are slightly crazy, and our nation is safer for it.”—Bing West, #1 New York Times bestselling co-author of Call Sign Chaos

“By Water Beneath the Walls is the SEAL book we needed. A deep dive into the SEALs’ roots, it is written with style and insight that could come only from someone who is part of the community. Milligan uses razor-sharp analysis and masterful storytelling to leave us with a clear understanding of not only how the SEALs came into being, but, more important, why.”—Kevin Maurer, #1 New York Times bestselling co-author of Lions of Kandahar and No Easy Day

“If you want to know how the Navy SEALs became the elite commandos they are today, this is the book for you. Ben Milligan is a detailed storyteller, and his book is a fascinating, page-turning read that deserves a place on any military history lover’s shelf.”—former Navy SEAL and New York Times bestselling author Brandon Webb

“A well-researched, nuanced, and candid look at the evolution of American military special operations and, specifically, the expansion of the role of the Navy SEALs from a maritime/littoral-centric force to an inland, land-based capture/kill special operations component.”—Dick Couch, New York Times bestselling author of The Warrior Elite and Chosen Soldier
Read More