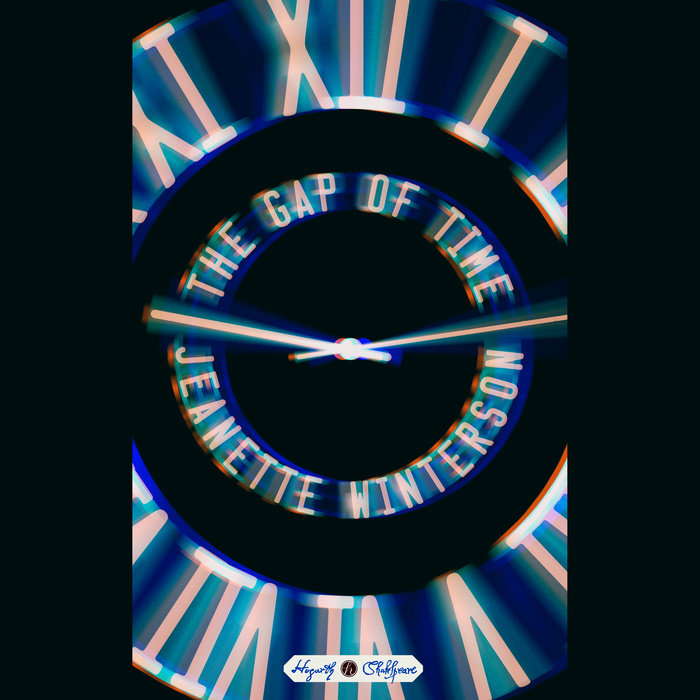 Written by: Jeanette Winterson
Read by: Penelope Rawlins, Mark Bazeley & Ben Onwukwe
7 Hours and 2 Minutes Imprint: Random House Audio Genre: Fiction - Literary Release Date: October 06, 2015
The Winter’s Tale is one of Shakespeare’s “late plays.” It tells the story of a king whose jealousy results in the banishment of his baby daughter and the death of his beautiful wife. His daughter is found and brought up by a shepherd on the Bohemian coast, but through a series of extraordinary events, father and daughter, and eventually mother too, are reunited.

In The Gap of Time, Jeanette Winterson’s cover version of The Winter’s Tale, we move from London, a city reeling after the 2008 financial crisis, to a storm-ravaged American city called New Bohemia. Her story is one of childhood friendship, money, status, technology and the elliptical nature of time. Written with energy and wit, this is a story of the consuming power of jealousy on the one hand, and redemption and the enduring love of a lost child on the other.
Read More
An NPR Best Book of the Year Selection

"The Gap of Time takes the play’s themes of love, jealousy and estrangement and spins them into a taut contemporary tale."--New York Times

“Hogarth leads off the series with one of the most gifted writers working today, Jeanette Winterson, taking on the formidable ‘Winter’s Tale,’ and the result is a shining delight of a novel…Winterson’s gift for capturing unspoken emotion with powerful but never overwritten lyricism creates a cast of characters whose points of view are fascinating and sometimes harrowing to inhabit, fully employing the novel form’s unique ability to illuminate the interiors of the actors on the page…The opening acts of the novel are propelled by an intricately suspenseful series of scenes that capture the raw violence stemming from greed, envy and paranoia. A subtle critique of hyper masculinity, and the attendant violence fueled by money (specifically the loss thereof), ripples meaningfully beneath the novel’s surface. Winterson’s great gift is capturing the emotional heft of her stories with sentences that hum along, beautiful, unexpected and swift…Winterson wrestles wonderfully with a perplexing text and emerges with a complicated, satisfying and contemporary tale that stands wholly on its own, despite the Bard’s significant shadow. But then again, show me a novelist who isn’t under that shadow. For that reason, and because Winterson makes the cover business book easy, I imagine many novelists are salivating for chance to write the next book in this promising new series.”--New York Times Book Review

"Winterson doesn’t just update the story: she fills in its psychological nuances... It’s fun to see Winterson solve the play’s problems, but the book’s real strength is the way her language shifts between earthy and poetic and her willingness to use whatever she needs to tell the story (angels, video games, carjackings). She makes us read on, our hearts in our mouths, to see how a twice-told story will turn out this time."--Publishers Weekly (starred review)

"[The Gap of Time] will keep you enthralled from start to finish."--Paste Magazine

"The intricacy with which Winterson has plotted her novel against each Shakespearean detail will delight readers familiar with the original … it’s part of a vision of a world in which past, present, and future are lived simultaneously, original and adaptation existing in the same moment."--The Times (London)

"A book of considerable beauty… Winterson’s fiction is a fine invitation into this deeply Shakespearean vision of imagination as the best kind of truth-telling."--New Statesman

"Winterson’s stage, like that of Shakespeare, is filled with wonders."--Times Literary Supplement

"Winterson is faithful to both the narrative and the spirit of the play, while transposing it to an utterly different and modern setting… There is lightness here, in the frisky prose and the author’s delight in invention, but you are never free of the awareness of dark shadows where danger and corruption lie in wait."--Scotsman

"A deeply felt, emotionally intelligent and serious novel, which resists easy answers and yet expresses the hope that human beings can muddle through, and that bad pasts can have good outcomes... Pulsates with such authenticity and imaginative generosity that I defy you not to engage with it."--Evening Standard

"The Winter’s Tale, one of the late, 'problem' plays, is about loss, remorse and forgiveness, and the nature of time. Winterson has captured all this with respect and affection for Shakespeare’s text, and made it new with her own bold and poetic prose and her insights into love and grief. There are passages here so concisely beautiful they give you goosebumps."--Radar

"With a few deft strokes Winterson creates Shakespeare’s characters in contemporary clothing keeping me in suspense throughout. It is a triumph and a good omen for this ambitious new project."--Daily Express

"Emotionally wrought and profoundly intelligent it will pull you into its troubled, wise world of jealousy, paranoia, grief, revenge and forgiveness in some of the most stunning prose you’ll read this year … Winterson masterfully interweaves layers of narrative and themes so that reading the novel is like listening to a Bach prelude and fugue … A supremely clever, compelling and emotionally affecting novel that deserves multiple readings to appreciate its many layers."--Mail on Sunday

"The book is the first of a major new series, in which well-known novelists give Shakespeare a modern twist, and Winterson rises to the challenge with some ingenious touches."--Observer

"There's a lovely, lilting cadence to Winterson's tribute to Shakespeare's penultimate play... Smart and witty... Despite her faithfulness to Shakespeare's storyline, Winterson manages against the odds to keep us gripped...she wins our sympathy and so injects a real sense of jeopardy into a familiar tale. It's no mean feat. Compelling, entertaining and elegant."--The Guardian

"Moving, pacy... A clever book that explores themes of love, loss and forgiveness as parents screw up their children and do the unthinkable. A thrilling read."--Irish News
Read More