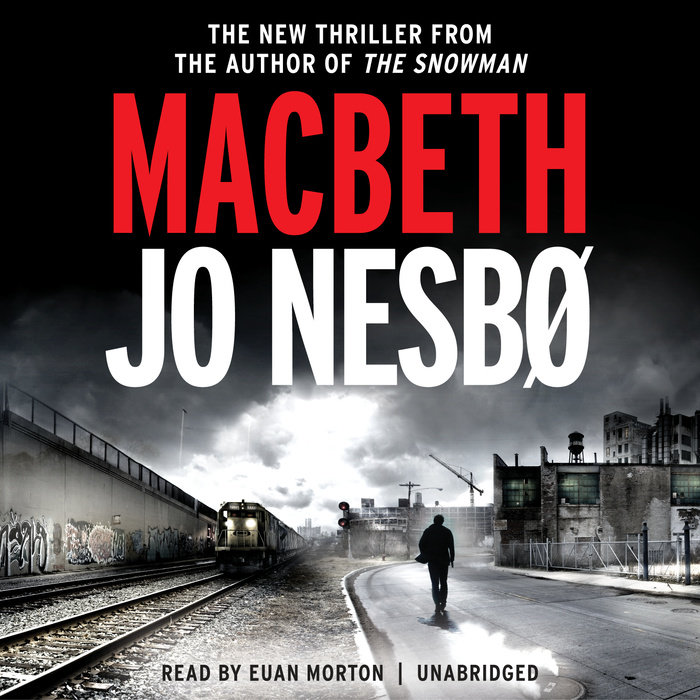 Shakespeare’s dark and tragic play retold in a heart-pounding New York Times bestselling thriller from the author of The Snowman and The Thirst.

Set in the 1970s in a run-down, rainy industrial town, Jo Nesbo's Macbeth centers around a police force struggling to shed an incessant drug problem. Duncan, chief of police, is idealistic and visionary, a dream to the townspeople but a nightmare for criminals. The drug trade is ruled by two drug lords, one of whom—a master of manipulation named Hecate—has connections with the highest in power, and plans to use them to get his way.

Hecate’s plot hinges on steadily, insidiously manipulating Inspector Macbeth: the head of SWAT and a man already susceptible to violent and paranoid tendencies. What follows is an unputdownable story of love and guilt, political ambition, and greed for more, exploring the darkest corners of human nature, and the aspirations of the criminal mind.
Read More
Praise for Macbeth:

“Nesbo manages the balancing act of being true to the original play without slighting his own interests as a writer: bleak settings, loyalty (or the lack thereof) among crooks, clever escapes from tight spots, the affinities between policemen and the criminals they chase.”
—The Washington Post

"Nesbø has adhered to his contract, delivering a book that plays off of Shakespeare's work but succeeds as his own."
—NPR.org

“The legions of readers who adore the dark Scandinavian noir of Jo Nesbø will also love Macbeth, his adaptation of Shakespeare’s famous play.”
—USA Today

“Nesbø infuses the mythic elements of the tragedy with bold strokes of horrific, Don Winslow–like drug-war realism. The result displays in a strikingly original way both the timelessness of Shakespeare’s art and the suppleness of noir to range well beyond the strictures of formula.”
—Booklist (starred)

"Nesbø's much-heralded gifts are on display--using his talent for conjuring the chilly Munch-like atmospherics of Oslo in the winter and his eye for grisly, alarming details that slam home the horror of the evil that men do."
—New York Times Book Review

"The world is dark and frozen, according to Nordic noir, and so is the human heart. But it's the magic Nesbø works with the genre's tropes that matters. . . . [He] might be my favorite of the lot."
—Chicago Tribune

“Nesbø explores the darkest criminal minds with grim delight and puts his killers where you least expect to find them. . . . His novels are maddeningly addictive.”
—Vanity Fair

“In the crowded field of Scandinavian crime fiction, Nesbø’s books stand out. . . . Nesbø likes to rip plots up . . . to play with the conventions of his genre.”
—The New Yorker

“[Nesbø is] the writer most likely to take the ice-cold crown in the critically acclaimed—and now bestselling—category of Nordic noir.”
—Los Angeles Times

“I am the world’s greatest living crime writer. [Jo Nesbø] is a man who is snapping at my heels like a rabid pitbull poised to take over my mantle when I dramatically pre-decease him.”
—James Ellroy

“The next Munch or Ibsen could be Jo Nesbø”
—CNN

Shakespearean Stories for the Bard’s Birthday!Congratulations to Our 2019 Audie Award Finalists