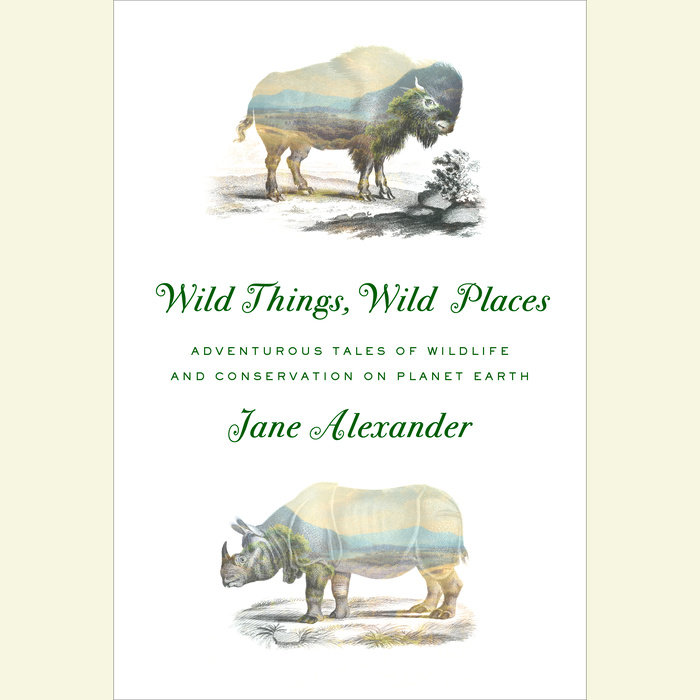 A moving, inspiring, personal look at the vastly changing world of wildlife on planet earth as a result of human incursion, and the crucial work of animal and bird preservation across the globe being done by scientists, field biologists, zoologists, environmentalists, and conservationists. From a longtime, much-admired activist, impassioned wildlife proponent and conservationist, former chairperson of the National Endowment for the Arts, four time Academy Award nominee, and Tony Award and two-time Emmy Award-winning actress.

In Wild Things, Wild Places, Jane Alexander movingly, with a clear eye and a knowing, keen grasp of the issues and on what is being done in conservation and the worlds of science to help the planet's most endangered species to stay alive and thrive, writes of her steady and fervent immersion into the worlds of wildlife conservation, of her coming to know the scientists throughout the world--to her, the prophets in the wilderness--who are steeped in this work, of her travels with them--and on her own--to the most remote and forbidding areas of the world as they try to save many species, including ourselves.
Read More
Acclaim for Jane Alexander’s
Wild Things, Wild Places

“Captures the esteemed actress' adventures as a birder, and her views on conservation and the environment . . . Vivid and passionate.”
—Lorna Koski, WWD

“It’s time to treat scientists like heroes again . . . In her first nature book, the Hollywood and Broadway star shares personal tales of exploration and conservation that urge and inspire . . . By layering the victories and experiences of the different conservation dilemmas plaguing the world, Alexander creates a sense of hope to balance the book’s urgent reality.”
—Purbita Saha, Audubon

“Alexander shares a lifetime of travel to places as farflung as Bhutan and Belize, where she encountered some of the world’s most endangered species.”
—Simon Worrall, National Geographic

“Intimate and eloquent . . . Alexander shares her joy in the wild while reminding us of the speed and extent of ongoing anthropogenic environmental degradation . . . An eclectic, engaging and thoughtful travel diary about the state of the world’s wildlife written by an author who loves and reveres nature and all its creatures, great and small . . . A buffet for those who might enjoy sharing a personal retrospective on the natural wonders of this world from an author who has used her stardom to raise awareness of the imperative of reducing the massive environmental footprint of our species.”
—Marilyn Gates, New York Journal of Books

“An impassioned if measured narrative of her explorations of little-known corners of the Earth with an eye toward celebration and conservation . . . The real force of Wild Things, Wild Places resides in the author’s articulation of her exhilaration of the wonders of nature (particularly her love of birds) and her willingness to ford streams, slash through jungles, and scale mountains to defend it.”
—Publishers Weekly
Read More

This Is The Author | Jane Alexander