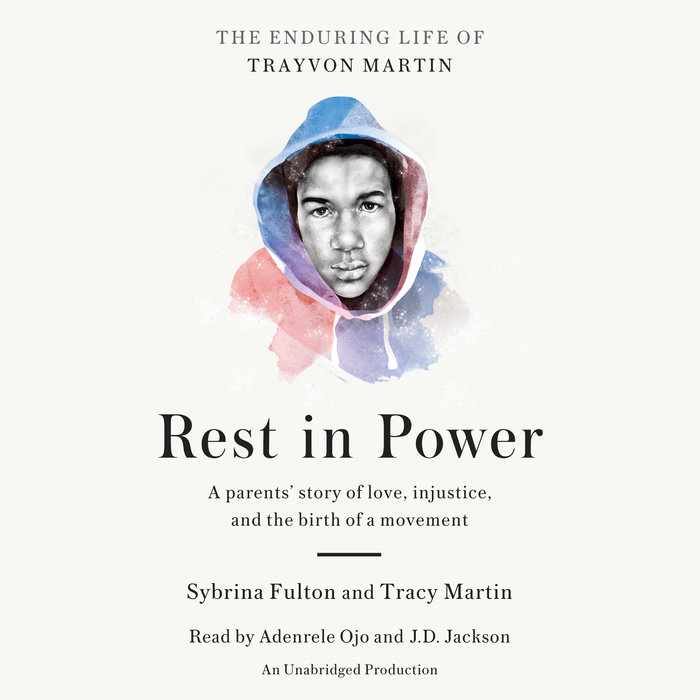 Written by: Sybrina Fulton & Tracy Martin
Read by: Adenrele Ojo & JD Jackson
13 Hours and 30 Minutes Imprint: Random House Audio Genre: Biography & Autobiography - Personal Memoirs Release Date: January 31, 2017
Trayvon Martin’s parents take readers beyond the news cycle with an account only they could give: the intimate story of a tragically foreshortened life and the rise of a movement.

“A reminder—not only of Trayvon’s life and death but of the vulnerability of black lives in a country that still needs to be reminded they matter.”—USA Today

Now a docuseries on the Paramount Network produced by Shawn Carter

Years after his tragic death, Trayvon Martin’s name is still evoked every day. He has become a symbol of social justice activism, as has his hauntingly familiar image: the photo of a child still in the process of becoming a young man, wearing a hoodie and gazing silently at the camera. But who was Trayvon Martin, before he became, in death, an icon? And how did one black child’s death on a dark, rainy street in a small Florida town become the match that lit a civil rights crusade?

Rest in Power, told through the compelling alternating narratives of his parents, Sybrina Fulton and Tracy Martin, answers those questions from the most intimate of sources. The book takes us beyond the news cycle and familiar images to give the account that only his parents can offer: the story of the beautiful and complex child they lost, the cruel unresponsiveness of the police and the hostility of the legal system, and an inspiring journey from grief and pain to power, and from tragedy and senselessness to purpose.
Read More
“A reminder—not only of Trayvon’s life and death but of the vulnerability of black lives in a country that still needs to be reminded they matter.”—USA Today

“A brave, heart-rending narrative from the parents who lost their son far too soon.”—Kirkus Reviews (starred review)

“Not since Emmitt Till has a parent’s love for a murdered child moved the nation to search its soul about racial injustice and inequality. Sybrina Fulton and Tracy Martin’s extraordinary witness, indomitable spirit and unwavering demand for change have altered the dynamics of racial justice discourse in this country.  This powerful book illuminates the witness, the grief, and the commitment to reform that Trayvon Martin’s death has mobilized; it is a story fueled by a demand for justice but rooted in love.”—Bryan Stevenson, author of Just Mercy

“As the fifth anniversary of this tragic crime nears, Fulton and Martin share a remarkably candid and deeply affecting in-the-moment chronicle of the explosive aftermath of the murder. Writing in alternate chapters, they share every detail of their shock, grief, and grueling quest for justice. . . . Given the unconscionable shooting deaths of young black men, many by police, that followed Trayvon’s, this galvanizing testimony from parents who channeled their sorrow into action offers a deeply humanizing perspective on the crisis propelling a national movement.”—Booklist (starred review)
Read More