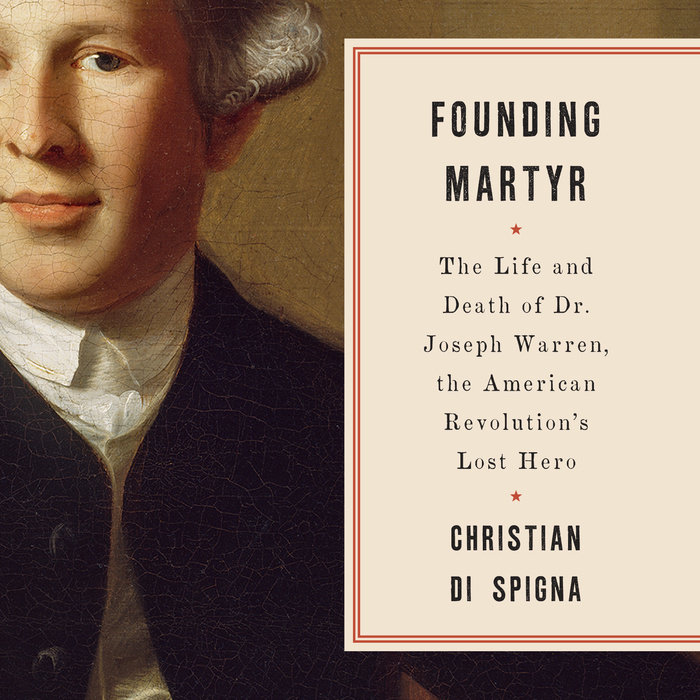 Little has been known of one of the most important figures in early American history, Dr. Joseph Warren, an architect of the colonial rebellion, and a man who might have led the country as Washington or Jefferson did had he not been martyred at Bunker Hill in 1775. Warren was involved in almost every major insurrectionary act in the Boston area for a decade, from the Stamp Act protests to the Boston Massacre to the Boston Tea Party, and his incendiary writings included the famous Suffolk Resolves, which helped unite the colonies against Britain and inspired the Declaration of Independence. Yet after his death, his life and legend faded, leaving his contemporaries to rise to fame in his place and obscuring his essential role in bringing America to independence.

Christian Di Spigna’s definitive new biography of Warren is a loving work of historical excavation, the product of two decades of research and scores of newly unearthed primary-source documents that have given us this forgotten Founding Father anew. Following Warren from his farming childhood and years at Harvard through his professional success and political radicalization to his role in sparking the rebellion, Di Spigna’s thoughtful, judicious retelling not only restores Warren to his rightful place in the pantheon of Revolutionary greats, it deepens our understanding of the nation’s dramatic beginnings.


Cover image: Joseph Warren (detail), about 1765, oil on canvas, 50”X39-3/4”, by John Singleton Copley, collection of Museum of Fine Arts, Boston. Photograph © 2018 Museum of Fine Arts, Boston.
Read More
“Before George Washington, before Thomas Jefferson, even before Alexander Hamilton, there was Joseph Warren. A British commander once called him ‘the greatest incendiary in all America.’ Warren stood at the center of the colonial intrigue against the British in Boston… In Founding Martyr, Christian Di Spigna has produced a gripping biography of one of the American Revolution’s earliest activists. This is no whitewashed version of the Founding… Founding Martyr helps restore to their proper place Joseph Warren’s important contributions to our nation’s prehistory.”
—WALL STREET JOURNAL

“In a marvelously written and well-researched biography, Di Spigna paints a portrait of Warren that emphasizes not only his zeal and almost relentless patriotic quest, but also his exceedingly successful medical professional and how it was interwoven with his spirit of liberty… Di Spigna’s effort puts Warren on the appropriate historical stage.”
—DAILY PRESS

"Di Spigna argues persuasively that Warren, who died at the Battle of Bunker Hill, was the indispensible man in the Boston rebellion that led to revolution and independence... Founding Martyr is a joy to read—thoroughly researched and written with a narrative pace that reflects Warren's own sense of urgency as tensions with England rose."
—AMERICAN SPIRIT

“A product of exhaustive research and a plethora of primary sources, this work is thorough, powerful, and eloquently written. In short, as an effective outline of the life and times of an all too frequently overlooked founding father, this biography would be a valuable addition to the bookshelf of any historian, casual or professional.”
—REVIEWS IN HISTORY

"Joseph Warren has finally found the biographer who restores him to his place among the architects of American independence. Well-written and thoroughly researched, Founding Martyr not only illuminates Warren's role, but sheds new light on how resistance to British policies was organized at the grass roots.  It is an important contribution to our understanding of the coming of the American Revolution."
—ERIC FONER, Pulitzer Prize-winning author of The Fiery Trial

"Without Joseph Warren, who combined the passionate eloquence of Thomas Jefferson with the leadership abilities of George Washington, the American Revolution might have never even gotten started.  Christian Di Spigna has written a laudable and carefully researched biography of the Founding Father history forgot."
—NATHANIEL PHILBRICK, author of Valiant Ambition and Bunker Hill

“For over a century, Joseph Warren's heroic death at Bunker Hill has cast a shadow over his quite extraordinary life.  Ironically, the fact that he was the first martyr to what was simply called the Cause has obscured his role in making the American Revolution happen. Christian Di Spigna is the first modern historian to bring Warren to life again as the prominent partner of Samuel Adams in leading American resistance to British imperialism during the decade before the first shots were fired.”
—JOSEPH J. ELLIS, Pulitzer Prize–winning author of Founding Brothers and American Dialogue: The Founders and Us

“The American Revolution had many martyrs, but few of them were more worthy of the term than Joseph Warren. Largely forgotten, Warren is brought back to life in this exciting new biography by Christian Di Spigna. In vivid and fast-paced chapters, Di Spigna chronicles Warren’s rise to prominence among the Boston revolutionaries; equally, he takes the story up to the present, explaining how and why Warren dropped out of the picture. Founding Martyr restores Warren to his rightful place in the revolutionary story.”
—HERBERT SLOAN, Professor Emeritus of History, Barnard College

“Di Spigna argues that, although Joseph Warren (1741-1775) remains largely unknown, he was ‘one of the most important figures in the movement for independence,’ a characterization amply supported by the evidence presented in this revealing and insightful biography… Di Spigna incorporates diligent research, enhanced by analysis of primary sources only he has tracked down (such as medical records Warren maintained for his practice), into a gripping narrative that doesn’t shy away from the darkness in his subject, including Warren’s family’s ownership of slaves. This book will give readers a fuller picture of American leadership before the active engagement of those now called the founding fathers.”
—PUBLISHERS WEEKLY (starred)

“A fresh biography of an underappreciated figure in American history… [Di Spigna] reminds readers that Warren was more than a man who sacrificed his life for the cause of liberty… [he] persuasively argues that Warren was ‘a rare combination of statesman and warrior’ and that ‘his effective arsenal of voice, pen, and sword was unrivaled by any other patriot’… Hopefully, Di Spigna’s insightful biography will rekindle public interest in Warren, a man who deserves to be remembered.”
—KIRKUS REVIEWS

“The short but eventful life of Dr. Joseph Warren should have earned him a place in the pantheon of heroes of our struggle for independence… In this unabashedly admiring biography, Di Spigna strives to restore Warren’s fame… Readers may sense that Warren was a romantic adventurer who preferred fighting to the pursuits of healing and family life. This is a valuable reminder that it takes all types to make a revolution.”
—BOOKLIST

“[A] concise and accessible primer… a great read for those interested in early American history.”
—LIBRARY JOURNAL