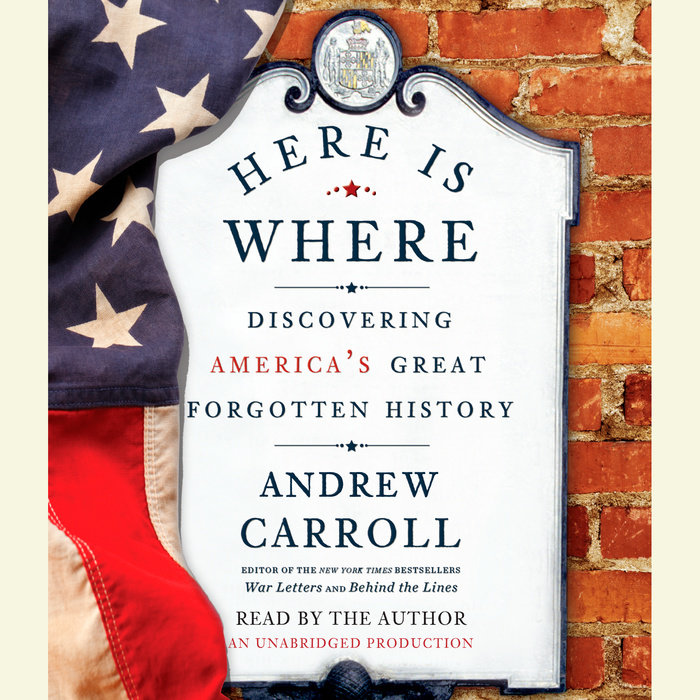 The centerpiece of a major national campaign to indentify and preserve forgotten history, Here Is Where is acclaimed historian Andrew Carroll’s fascinating journey of discovery in which he travels to each of America’s fifty states and explores locations where remarkable individuals once lived or where the incredible or momentous occurred.

Sparking the idea for this audiobook was Carroll’s visit to the spot where Abraham Lincoln’s son was once saved by the brother of Lincoln’s assassin.  Carroll wondered, How many other unmarked places are there where intriguing events unfolded -- or where extraordinary men and women made their mark?  And then it came to him: the idea of spotlighting great hidden history by traveling the length and breadth of the United States, searching for buried historical treasure.

In Here Is Where, Carroll drives, flies, boats, hikes, kayaks and trains into the past, and in so doing, uncovers stories that inspire thoughtful contemplation, occasional hilarity and often, awe. Among the things we learn:

*Where the oldest sample of DNA in North America was discovered

*Which famous FBI agent was the brother of a notorious gangster

*Which cemetery contains one million graves – but only one marked

Featured prominently in Here Is Where are an abundance of firsts (including the first elevator, the first modern anesthesia, the first cremation, and the first murder conviction based on forensic evidence), outrages (from massacres, to forced sterilizations, to kidnappings) and breakthroughs (from the invention of the M-1 carbine to the recovery of the last existing sample of Spanish Flu to the building of the rocket that made possible space travel).

A profound reminder that the ground we walk is often the top sedimentary layer of amazing past events, Here Is Where represents just the first step in an ongoing project that will recruit citizen historians to preserve what should be remembered.

Read More
"Readers should fasten their seatbelts...Carroll's explorations are strangely compelling—I started wondering what history had disappeared from my own neighborhood. Here Is Where could be the basis for a cool Google Glass app—mash it up with GPS coordinates and let it populate the spaces around us with ghosts, both good and evil. We may lose a bit of ourselves by outsourcing our imagination. But we may lose even more by letting time erode the history of our land."--Wall Street Journal

“Carroll takes readers on an eye-opening and entertaining grand tour of America in this lively exploration of lesser-known or overlooked historical sites. From birthplaces to gravesites and high points to low, from those that inspired inventions to those that sparked change, he leaves no stone unturned or landmark unvisited…Part travelogue, part history, this book should be required reading for anyone interested in America’s past.”
--Publishers Weekly (starred review)

"Andrew Carroll has always been a top-notch editor. I had no idea he was as fine a storyteller.  Great storytelling can be wonderfully addictive. Here Is Where captured me completely -- I couldn't put it down."
--Jeff Shaara, New York Times bestselling author of Gods and Generals, Last Full Measure and Blaze of Glory

“Here is Where is remarkable for the painstaking research on display and its yield of rescued-from-obscurity stories. Many of the true incidents Andrew Carroll has uncovered aren’t just surprising but powerful.  Others are simply laugh-out-loud funny, but all are described with considerable skill.  America has always had among its citizenry a number of individuals whose legacy is immense but unappreciated, and Carroll has truly done them justice.”
--Steven Pressfield, bestselling author of Gates of Fire, Tides of War and Killing Rommel

"Impressive...Carroll has discovered a way of doing history that, once you
see it, seems so obvious, indeed right under your nose or feet.  But to the best of my knowledge, no one has done this before."
--Joseph J. Ellis, Pulitzer Prize winning author of Revolutionary Summer and Founding Brothers

“Both a fascinating excavation of under-appreciated events and agents and a compelling analysis of what binds us together, Here Is Where makes for rich and vivid reading.  It seems to me that Andrew Carroll has become the Charles Kuralt of American history.”
--Les Standiford, author of Desperate Sons and Last Train to Paradise

“Writing with a historian’s insight and the skill of a master storyteller, Andy Carroll reminds us to look for the fascinating bits of history that lie just behind the curtains of our modern surroundings. Here is Where is a captivating, thoroughly enjoyable journey across the country with a friend who knows all the cool places to stop and have a look.”
--Gregory A. Freeman, The Last Mission of the Wham Bam Boys and The Forgotten 500

"In Here Is Where, one of our best historian-sleuths, Andrew Carroll, has given us a fresh and irresistible approach to experiencing history. Until someone invents a time machine, it's the next best thing to being there--and he's such a vivid, engaging writer that it's probably more fun."
--James Donovan, author of A Terrible Glory and The Blood of Heroes

"Andrew Carroll takes the reader on a fascinating journey of discovery to uncover the forgotten history that lies hidden around us. This is a terrific book: refreshingly original, fast-paced, entertaining, and always insightful. It’s full of fun and interesting stories that bring the past to life and remind us that we are surrounded by the artifacts of history."
--Steven M. Gillon, Scholar-in-Residence at The History Channel and author of Ten Days That Unexpectedly Changed America
Read More 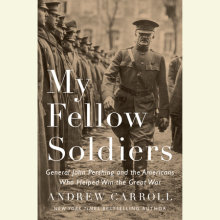