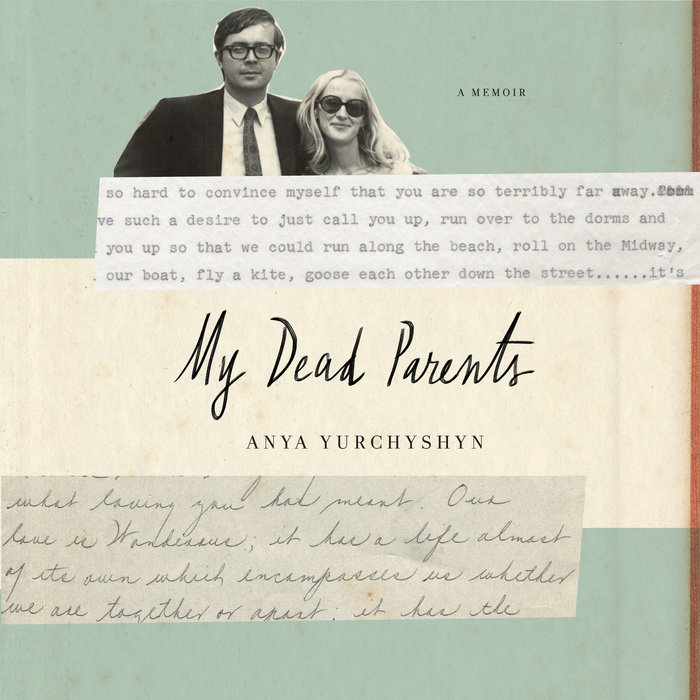 "Sharp and searching...a potent look at the fraught, painful, and complicated relationship between parents and children, and the mysteries — revelatory, difficult — that can and cannot be solved."
— Boston Globe

Anya Yurchyshyn grew up in a narrow townhouse in Boston, every corner filled with the souvenirs of her parents’ adventurous international travels. On their trips to Egypt, Italy, and Saudi Arabia, her mother, Anita, and her father, George, lived an entirely separate life from the one they led as the parents of Anya and her sister – one that Anya never saw. The parents she knew were a brittle, manipulative alcoholic and a short-tempered disciplinarian: people she imagined had never been in love.

When she was sixteen, Anya’s father was killed in a car accident in Ukraine. At thirty-two, she became an orphan when her mother drank herself to death. As she was cleaning out her childhood home, she suddenly discovered a trove of old letters, photographs, and journals hidden in the debris of her mother’s life. These lost documents told a very different story than the one she’d believed to be true – of a forbidden romance; of a loving marriage, and the loss of a child. With these revelations in hand, Anya undertook an investigation, interviewing relatives and family friends, traveling to Wales and Ukraine, and delving deeply into her own difficult history in search of the truth, even uncovering the real circumstances of her father’s death – not an accident, perhaps, but something more sinister.

In this inspiring and unflinchingly honest debut memoir, Anya interrogates her memories of her family and examines what it means to be our parents’ children. What do we inherit, and what can we choose to leave behind? How do we escape the ghosts of someone else’s past? And can we learn to love our parents not as our parents, but simply as people? Universal and personal; heartbreaking and redemptive, My Dead Parents helps us to see why sometimes those who love us best hurt us most.
Read More
Named one of "The 20 Best New Books to Read in March" by PopSugar
Named one of The Million's Most Anticipated Books of 2018

Praise for My Dead Parents:

"Sharp and searching...The book grapples with the limits of what we can know of each other and is a potent look at the fraught, painful, and complicated relationship between parents and children, and the mysteries — revelatory, difficult — that can and cannot be solved and the ongoing nature of how we come to know the people closest to us, and ourselves."
— Boston Globe

"When Anya Yurchyshyn became an orphan at 32, she didn't like her parents very much. Then she stumbled upon a trove of documents that helped her see them in a whole new light... She had only seen her parents as a bitter, angry couple, but torrid love letters proved the opposite was true...Yurchyshyn's journey left her with the biggest revelation of all: She finally felt some respect for her parents — and was able to forgive them."
— New York Post

"Yurchyshyn allows her readers to experience her bewildering discoveries much as she did...What she learns does not erase her experiences, but it brings up better memories, of times they were fun and generous, and allows her to accept them, love them and grieve."
— Shelf Awareness

“Yurchyshyn’s first book, a memoir of her relationship with her parents before and after their deaths, examines the idea that children can never fully understand the depth and dimension of their parents…In this beautifully written, poignant, honest, and unflinching work, the author takes readers with her on her journey through grief and discovery as she finds out – for good or ill – who her parents really were…An inviting debut that is highly recommended to readers with an interest in memoir, narrative nonfiction, and family history.”
— Library Journal (starred review)

"This is a fascinating and insightful memoir about how relationships evolve and change, even after death.”
— Publishers Weekly

“Searching and intense, Yurchyshyn's book is not only a heartfelt examination of parent-child relationships; it is also an unsentimental interrogation of the complex nature of family love. A probing and candid memoir.”
— Kirkus

“This candid and redemptive memoir shows the fallibility of family and how perception can change everything.”
— Booklist

“My Dead Parents is a gripping, novelistic page-turner about a couple whose love collapsed into grief and pain, and the daughter who, while sorting through the mess they left behind, found something wholly unexpected. We all wish we could understand who our parents were before we existed, especially if their lives or deaths were shrouded in mystery. In this remarkable, unflinching work of art, Anya Yurchyshyn comes closer than anyone else ever has to achieving that impossible goal.”
— EMILY GOULD, author of Friendship

“In the heartwrenching My Dead Parents, Anya Yurchyshyn has reckoned with the most fundamental of human relationships — husband and wife, parent and child — and in so doing forces us to reconsider our own personal narratives of family. Beautifully told, this is a story that will stay with you long after you turn the final page.”
— DOREE SHAFRIR, author of Startup

This is the Author | Anya Yurchyshyn