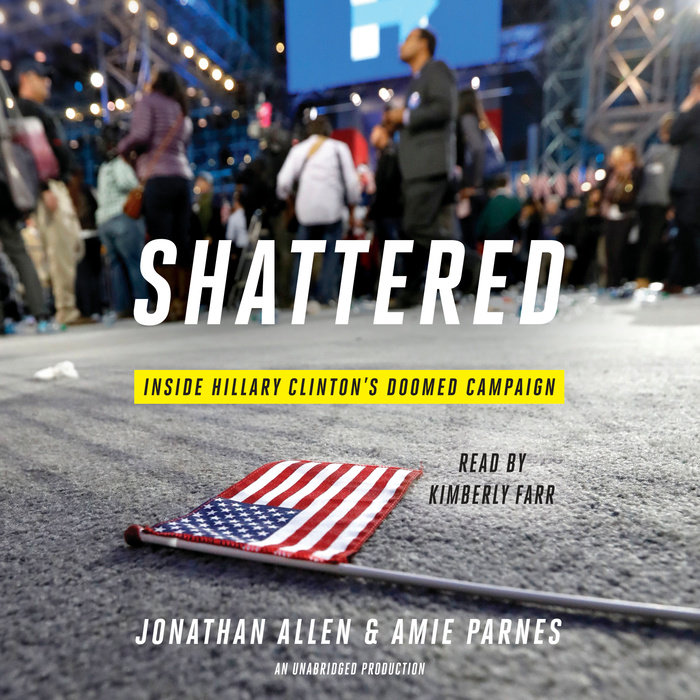 It was never supposed to be this close. And of course she was supposed to win. How Hillary Clinton lost the 2016 election to Donald Trump is the riveting story of a sure thing gone off the rails. For every Comey revelation or hindsight acknowledgment about the electorate, no explanation of defeat can begin with anything other than the core problem of Hillary's campaign--the candidate herself.

Through deep access to insiders from the top to the bottom of the campaign, political writers Jonathan Allen and Amie Parnes have reconstructed the key decisions and unseized opportunities, the well-intentioned misfires and the hidden thorns that turned a winnable contest into a devastating loss. Drawing on the authors' deep knowledge of Hillary from their previous book, the acclaimed biography HRC, Shattered offers an object lesson in how Hillary herself made victory an uphill battle, how her difficulty articulating a vision irreparably hobbled her impact with voters, and how the campaign failed to internalize the lessons of populist fury from the hard-fought primary against Bernie Sanders.

Moving blow-by-blow from the campaign's difficult birth through the bewildering terror of election night, Shattered tells an unforgettable story with urgent lessons both political and personal, filled with revelations that will change the way readers understand just what happened to America on November 8, 2016.
Read More
A Kirkus Reviews Best Book of 2017

“[A] compelling new book... It’s the story of a wildly dysfunctional and ‘spirit-crushing’ campaign that embraced a flawed strategy (based on flawed data) that failed, repeatedly, to correct course... The blow-by-blow details in Shattered are nothing less than devastating... In fact, the portrait of the Clinton campaign that emerges from these pages is that of a Titanic-like disaster: an epic fail made up of a series of perverse and often avoidable missteps by an out-of-touch candidate and her strife-ridden staff.”
—New York Times

“How did she lose? Providing that answer is the mission accepted by Jonathan Allen and Amie Parnes in Shattered… They saw and heard far more than most of us, exploring deep inside ‘Clintonworld’ in search of the real story. And in these pages, they share enough of what they witnessed to enable us to reach our own conclusions… Allen and Parnes offer a first bridge beyond the journalism of the campaign year to the scholarship of the historians and other scholars who will process all this material for generations to come.”
—NPR

“Told largely through background interviews with campaign staff and a tangle [of] Clinton insiders, the book is a comprehensive chronicle of how her quest for the White House lurched and sputtered toward ignominious defeat… [Shattered is] richly reported.”
—TIME

"What Allen and Parnes captured in Shattered was a far more revealing portrait of the Democratic Party intelligentsia than, say, the WikiLeaks dumps. And while the book is profoundly unflattering to Hillary Clinton, the problem it describes really has nothing to do with Secretary Clinton. The real protagonist of this book is a Washington political establishment that has lost the ability to explain itself or its motives to people outside the Beltway... If the ending to this story were anything other than Donald Trump being elected president, Shattered would be an awesome comedy, like a Kafka novel—a lunatic bureaucracy devouring itself. But since the ending is the opposite of funny, it will likely be consumed as a cautionary tale."
—Matt Taibbi, Rolling Stone

“Just like Game Change and Double Down, Shattered comes filled with plenty of juicy behind-the-scenes stories about the 2016 election… Compiled from anonymous interviews with more than 100 sources 'up and down the ranks of the campaign,' Shattered provides a detailed timeline of how a 'winnable race' was lost.”
—Entertainment Weekly

“For those who like political autopsies, I recommend the new book by Jonathan Allen and Amie Parnes, Shattered.”
—Niall Ferguson, The Boston Globe

“This highly entertaining and fast-moving book provides an extensive analysis of what caused the failure of Hillary Clinton’s unwieldy and hugely expensive campaign to carry its highly favored candidate across the finish line.”
—The Washington Times

"This withering account of Hillary Clinton's Presidential campaign... yields a great deal of backroom color... the Clinton campaign never had a clear picture of its own candidate or of what was coming."
—The New Yorker

“Jonathan Allen and Amie Parnes' exegesis of how Hillary Clinton lost the 2016 US Presidential Election to—do I even have to say his name?—is a thorough and, at points, dishy behind-the-scenes look at what went so horribly wrong in a campaign that clearly thought they had it right.”
—Vice

“A riveting account of the final, dreadful hours of Clinton’s long pursuit of the presidency… Thanks to Allen and Parnes, we now know how Clinton reacted, at the moment she was supposed to become the first female president.”
—Denver Post

“[Shattered] sheds particular light on the painful turn of events on election night, as Clinton watched the returns deviate dramatically from the path her campaign had so confidently predicted… As the first take on Clinton’s doomed campaign, [Allen and Parnes] offer a behind-the-scenes view of the obstacles in her way—some familiar and others a consequence of the shifting American electorate.”
—The Guardian

“Hillary Clinton’s loss at the hands of Donald Trump last November is the single biggest upset in modern presidential politics. I’ve spent the intervening months trying to understand what Clinton’s defeat said about the electorate, about Clinton and about the campaign she ran. Now, there’s a book that does all of that for me!”
—Chris Cillizza, CNN

“In the last weeks before the election, the Hillary Clinton campaign did no polling… This is one of the thousand revelations in Shattered, the new book by Jonathan Allen and Amie Parnes that, for political junkies, redefines the word ‘juicy’ for our time… Allen and Parnes pile up headshaking detail after headshaking detail from the very beginning of her campaign to its end.”
—New York Post

“We’ve waited five months but we finally have the first thorough dissection of the mangled road kill that is the Hillary for president campaign. It’s called Shattered… It’s full of revelations about Clinton’s failed campaign.”
—Tucker Carlson, host of Fox’s “Tucker Carlson Tonight”

“Shattered: Inside Hillary Clinton’s Doomed Campaign, the new book by Jonathan Allen and Amie Parnes, is absolutely gripping reading, chock full of juicy reporting about the Democratic nominee’s campaign that you really wish you had read during the actual campaign.”
—The National Review

“Writing in a lively and fast-paced narrative, Allen and Parnes use their unparalleled access… to richly document what it felt like to be aboard the Clinton Hindenburg…”
—Vox.com

“Shattered: Inside Hillary Clinton’s Doomed Campaign should be required reading for anyone planning to run a political campaign.”
—Columbus Post-Dispatch

"[Allen and Parnes] have written the best making of the president book since the genre was created by Theodore H. White in 1960."
—Newsmax

“An in-depth dissection of Hillary Clinton's second campaign for the presidency, a failure on many counts… this readable, endlessly fascinating autopsy by Roll Call columnist Allen and The Hill White House correspondent Parnes, who co-authored HRC: State Secrets and the Rebirth of Hillary Clinton (2014)… A top-notch campaign examination. If, like so many others, you wonder what on earth happened in November 2016, this is all the explanation you need.”
—Kirkus Reviews (starred)

“Shattered provides a sharp behind-the-news and behind-the-scenes palette of details for a campaign that, in retrospect, seemed preordained to fail, and fail miserably.”
—The Globe and Mail
Read More 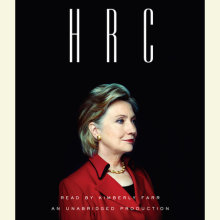