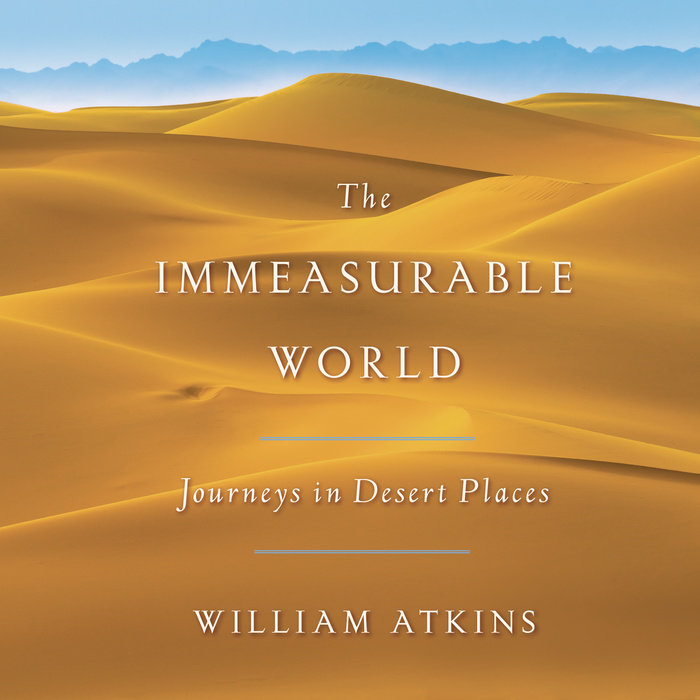 "William Atkins is an erudite writer with a wonderful wit and gaze and this is a new and exciting beast of a travel book."—Joy Williams

In the classic literary tradition of Bruce Chatwin and Geoff Dyer, a rich and exquisitely written account of travels in eight deserts on five continents that evokes the timeless allure of these remote and forbidding places.

One-third of the earth's surface is classified as desert. Restless, unhappy in love, and intrigued by the Desert Fathers who forged Christian monasticism in the Egyptian desert, William Atkins decided to travel in eight of the world's driest, hottest places: the Empty Quarter of Oman, the Gobi Desert and Taklamakan deserts of northwest China, the Great Victoria Desert of Australia, the man-made desert of the Aral Sea in Kazkahstan, the Black Rock and Sonoran Deserts of the American Southwest, and Egypt's Eastern Desert. Each of his travel narratives effortlessly weaves aspects of natural history, historical background, and present-day reportage into a compelling tapestry that reveals the human appeal of these often inhuman landscapes.
Read More
"The Immeasurable World courts comparisons with the capaciously learned nature writing of John McPhee. But there’s also an open-ended spiritual quest to Mr. Atkins' sojourns, which follow closely in the footsteps of religious and literary forerunners who were lured by the rewards of extreme renunciation... Peace of mind, isolation, a heightened attentiveness spurred by the proximity to death—these are conditions for clear, beautiful writing, and Mr. Atkins frequently meets the high standards of his precursors."
—Sam Sacks, The Wall Street Journal

"[Atkins] deftly turns his detouring into unified and potent storytelling... His descriptions... are, at times, intoxicating... [and] leavened by drily comic observations... If the aim of modern travel writing—that most open-ended of genres—is to teach readers something new of the world... then this book has richly succeeded."
—The Times Literary Supplement (London)

“Being a bit of a desert rat, I began The Immeasurable World with interest and finished enthralled and grievously enlightened. The strangeness and inhospitable nature of the world’s great deserts—and they are so variously singular—have not prevented humankind from assaulting and perverting their inconsolable beauties. William Atkins is an erudite writer with a wonderful wit and gaze and this is a new and exciting beast of a travel book.”
—Joy Williams

"Atkins is not in thrall to deserts... but loves them for their austerity, and the clarity of thought they grant... Gorgeous."
—Gavin Francis, The Guardian

"Atkins’ richly written account of his travels across deserts around the world brings Bruce Chatwin to mind, along with others who, like Atkins, have explored and have anaffinity for the solitude and vast expanse of the Earth’s empty places, such as Wallace Stegner, Gretel Ehrlich, and Sara Wheeler. Like theirs, Atkins’ prose is gorgeous... He also evokes the spirit of earlier desert travelers, including St. Anthony, T. E. Lawrence, and John Wesley Powell... Atkins’ book of journeys will be a modern-day classic."
—Booklist, starred review

"A rich and refreshing travelogue... A genius idea... An account of remarkable scope and depth... Ever alert and always engaging, [Atkins] has achieved that very rare feat: to see the world in a grain of sand."
—Financial Times

"British author [William] Atkins takes readers on a thoroughly enjoyable tour of the world's deserts...[He] also takes a contemporary look at [them]... [and] infuses his travel writing with poetic prose (he describes the Great Australian Bight as 'a callused web of skin between two digits') to describe the beauty of what many consider to be wastelands. Atkins's thoughtful book is a wonderfully satisfying travelogue."
—Publishers Weekly

"A treat for desert lovers... Atkins is a gifted and interesting writer, with a deft turn of phrase and an original mind. He uncovers the many guises of the desert with much imagination, insight and wit."
—Justin Morazi, The Spectator

“The Earth's surface may be two-thirds sea, but of its land, one-third is desert: an equally shifting, fluid place, fugitive and untold. Until William Atkins came along. In sublime prose that veers from startling human and natural history to dreamlike personal experience, The Immeasurable World brings apparently barren places to life in a brilliant, revelatory narrative. The author becomes a kind of sensor in the wilderness, electrically gathering together these stories. The result is a book in which to get lost and find another world.”
—Philip Hoare, author of Leviathan, or the Whale

"A fascinating look at seven deserts... The subject is riveting, the gorgeous prose reminiscent of nature observers from Thoreau to Leopold. Lovers of good descriptive writing will eat up this book."
—Library Journal, starred review

"Travel writing at its finest. It not only transports but gives access to the layered existence of each place – by the final page your world has become pared back but also amplified."
—Sydney Morning Herald

"After having taken readers deep inside the moorlands of his native England, Will Atkins now journeys far afield into the world’s deserts to look at not just those austere, sometimes forbidding places but also the things we feel compelled to build there: monasteries, border walls, nuclear sites. Had he been born a dozen or so decades ago, he might have been sharing a fire with T.E. Lawrence or a hookah with Gertrude Bell. As it is, he joins a small company of modern literary desert rats who are his fans as well as peers. Readers will be enthralled by his travels—and I, for one, am looking forward to seeing where his far-roving mind will wander to next.”
—Gregory McNamee, author of Tortillas, Tiswin, and T-Bones: A Food History of the Southwest

"Atkins’s study of desert life in seven journeys is wide-ranging, deep – and far from dry... Atmospheric, geological and geographical features that contribute to desert formation are well handled here, as are modern political issues... Delightfully variegated... An entertaining volume."
—The Observer
Read More