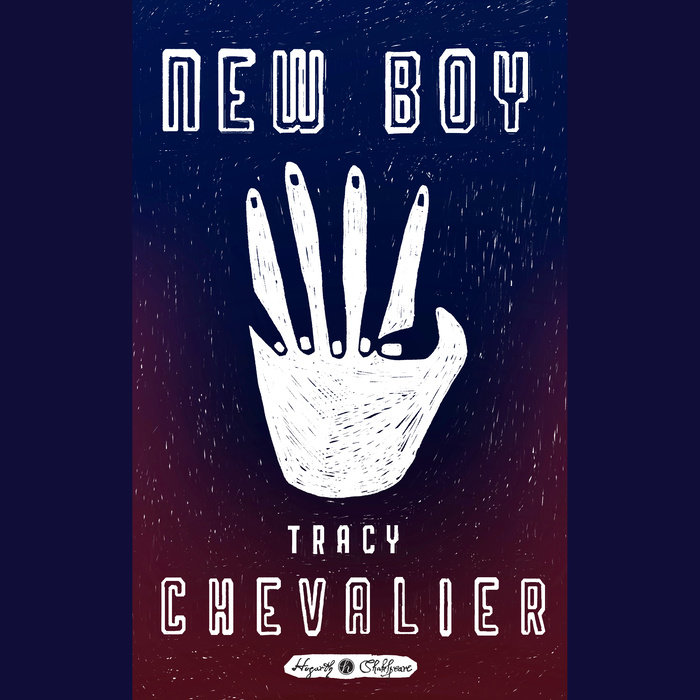 Arriving at his fifth school in as many years, diplomat’s son Osei Kokote knows he needs an ally if he is to survive his first day—so he’s lucky to hit it off with Dee, the most popular girl in school. But one student can’t stand to witness this budding relationship: Ian decides to destroy the friendship between the black boy and the golden girl. By the end of the day, the school and its key players—teachers and pupils alike—will never be the same again.

The tragedy of Othello is transposed to a 1970s suburban Washington schoolyard, where kids fall in and out of love with each other before lunchtime, and practice a casual racism picked up from their parents and teachers. Peeking over the shoulders of four 11 year olds—Osei, Dee, Ian, and his reluctant "girlfriend" Mimi—Tracy Chevalier's powerful drama of friends torn apart by jealousy, bullying, and betrayal will leave you reeling.
Read More
Praise for New Boy:

“What Chevalier has done is recast the play to illuminate the peculiar trials of our era…a fascinating exercise… provides some wicked delight. She’s immensely inventive about it all.”
—Washington Post

“Chevalier possesses a great talent for invoking a sense of time and place in her novels, and this one is no exception. From the flowered legs of bell-bottom jeans to the smack of double-dutch ropes on the playground, New Boy captures the spirit of not only the era, with its casual racism, but the essence of a ‘70s childhood as well. A masterful and powerful retelling of this classic story that takes the original to new places.”
—San Francisco Book Review

“The book succeeds in portraying a Shakespearean tragedy’s sense of growing unease, and culminates in an unnerving and haunting climax that will take a long time to shake.”
—Bust

“This is an engrossing and ultimately convincing story of its own, with characters you’ll believe in and a tragic ending worthy of the Bard.”
—Pittsburgh Post-Gazette

“Chevalier manages to turn this story into a true tragedy…New Boy will appeal to adult Shakespeare lovers and to young adults who may only know Shakespeare because of a couple teenage lovers in Verona.”
—Raleigh News and Observer

“The youth of the characters is played naturalistically and honestly, yet still manages to elicit much the same pathos that Othello’s tragic path does. The depth of connection between the original work and this new one is astonishing; Chevalier builds parallels within parallels that are both unexpectedly creative and exquisitely apt… It is clean and clever and emotionally charged, filled with moments that reflect perfectly the source material while never straying from the truths of the new setting.”
—The Maine Edge

“Chevalier’s novel does an admirable job of prompting readers to look backwards, to Shakespeare’s original material, and forward, to the lessons that 1970s-era school children might still teach us about the state of race relations in the US today.”
—BookReporter.com

“With breathtaking urgency, Chevalier brings Othello to a 1970s suburban elementary school outside Washington, D.C., where the playground is as rife with poisonous intrigue as any monarch’s court… Chevalier’s brilliantly concentrated and galvanizing improvisation thoroughly exposes the malignancy and tragedy of racism, sexism, jealousy, and fear.” —Booklist

“Chevalier smartly uses her narrative as an opportunity to spin a story commenting on racism in America.”—Publishers Weekly

“Othello as a Seventies schoolyard drama? Yes, it works marvellously. The emotions of emerging adolescence are a potent brew, with friendships, rivalries, budding sexuality, and the desire to fit in combining unflinchingly with the racism of the teachers (and some of the pupils). This is an evocative retelling of Shakespeare, and his characters’ interactions and motivations fit surprisingly well into the brutal world of childhood.” —Joanne Harris, author of Chocolat

"New Boy not only allows a better understanding of Othello the play, but also the continuing issues of racism in our society. Othello forces readers to consider how terrible it must have been for him to live among such racism in 16th-century Venice. Chevalier’s retelling brings it home and makes us question if our society today is really any better." —National Post

"Absorbing...[Chevalier] creates a world reminiscent of a Vermeer interior: suspended in a particular moment, it transcends its time and place."
—The New Yorker