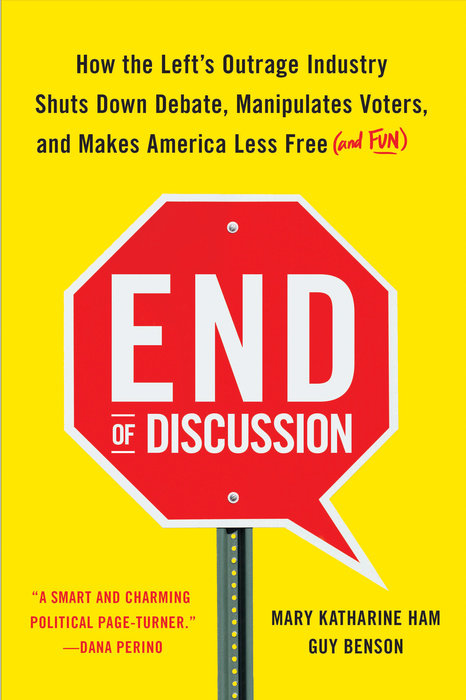 In this fresh and provocative new book, Mary Katharine Ham and Guy Benson, dynamic Fox News and Townhall Media duo, expose how the Left exploits fake outrage to silence their political opponents—in public, on social media, at work, and even in their own homes. You’ve felt it and “End of Discussion” can help you fight it.

The political correctness born on college campuses has mutated into a new hypersensitivity. It’s weaponized in Washington, D.C. by a network of well-trained operatives, media, and politicians, and proliferated throughout the country. The new Puritans of the Left are quick to ban comedians and commencement speakers alike for the sin of disagreeing with them. They demand “safe spaces” while making dissent increasingly dangerous for Americans.

Ham and Benson demonstrate just how dangerous the outrage industry—a coalition of mostly liberal blowhards and busybodies—is to America. The media frenzy they create is designed to disqualify opposing viewpoints on everything from health care to education by labeling them racist, sexist, and evil. They punish speech that makes them uncomfortable, demanding boycotts, censures, and people’s jobs. They seek to win political and cultural debates by preventing them from happening.

And if you think this behavior is relegated to political fights or politicians, think again. The same activists are ready to foment outrage over your association with the “wrong” fried chicken joints, Internet browsers, breast cancer charities, pasta, children’s toys, Halloween costumes, TV shows, schools, and even comedians’ jokes.

With Ham and Benson’s help, readers can cut through the noise and find their voices again, fighting back against the rampant self-censorship and hair-trigger apologies that always make things worse, not better. With fresh reporting and insightful, occasionally tongue-in-cheek analysis, End of Discussion is a timely handbook for anyone who wants to make sure debate doesn’t meet an ugly death.
Read More
“This book needed to be written, needed to be published and needs to be read. Best of all, it's great fun to read." – Brit Hume

“End of Discussion will actually start more conversations than it finishes. Mary Katharine and Guy are two of the bright stars of conservative commentary, and their insight and humor comes together well to showcase the absurdities of manu­factured outrage and the benefits of taking a breath before launching an attack. End of Discussion is a smart and charming political page turner that was a delight to read.” —Dana Perino, former White House press secretary and cohost of The Five on Fox News

“Here’s why I can wholeheartedly endorse and recommend this book: Mary Katherine Ham and Guy Benson are really good writers. This book had me laughing out loud on yesterday’s flight.” Jim Geraghty, contributor to National Review

"A brilliant exposé of the left’s outrageous outrage over everything!  Free speech isn’t free.  It must be fought for.  Get in the fight with this fantastic book by Mary Katherine Ham & Guy Benson!"
-- Brad Thor #1 New York Times bestselling author of CODE OF CONDUCT

"I can't think of any two people more qualified than Guy Benson and MaryKatharine Ham to expose the left's decidedly undemocratic efforts to silence opposing views. With their characteristic wit and humor, they take on the outrage industrial complex on behalf of fun- and freedom-loving Americans everywhere."
-- S.E. Cupp, author and nationally syndicated columnist

" This book will make you laugh—and cry—at a world where honest debate is all too rare."
-- Juan Williams,  Fox News analyst & author of Muzzled: The Assault on Honest Debate

“Come for the writing and the humor, stay for the point: The ‘outrage industry’ is destroying poli­tics. Benson and Ham have diagnosed a new kind of media cancer, one that is metastasizing and eat­ing away at our ability to survive as a free people, freely debating our future. Yes, that sounds seri­ous for a book with as wonderfully light a touch as this, and one so full of laugh-out-loud mo­ments. But it is true. That’s why you need to read this book.” —Hugh Hewitt
Read More