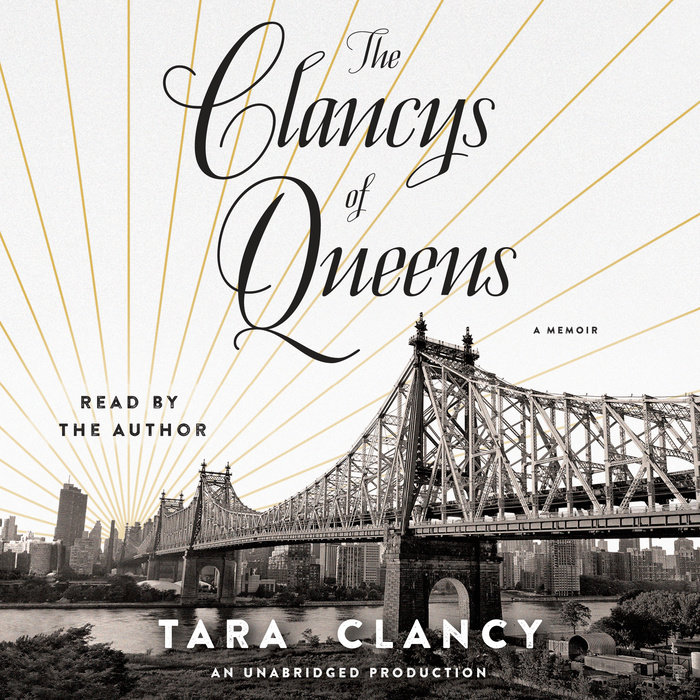 Fifth-generation New Yorker, third-generation bartender, and first-generation author Tara Clancy was raised in three wildly divergent homes: a converted boat shed in working class Queens, a geriatric commune of feisty, Brooklyn-born Italians, and a sprawling Hamptons estate she visited every other weekend. This childhood triptych comes to life in The Clancys of Queens, an electric, one-of-a-kind memoir.

From scheming and gambling with her force-of-nature grandmother, to brawling with eleven-year-old girls on the concrete recess battle yard of MS 172, to hours lounging on Adirondack chairs beside an immaculate croquet lawn, to holding court beside Joey O’Dirt, Goiter Eddy, and Roger the Dodger at her Dad’s local bar, Tara leapfrogs across these varied spheres, delivering stories from each world with originality, grit, and outrageous humor.

But The Clancys of Queens is not merely an authentic coming-of-age tale or a rowdy barstool biography. Chock-full of characters who escape the popular imaginings of this city, it offers a bold portrait of real people, people whose stories are largely absent from our shelves. Most crucially, it captures—in inimitable prose—the rarely-heard voices of New York’s working-class women.

With a light touch but a hard hit, The Clancys of Queens blends savvy and wit to take us on an unforgettable strata-hopping adventure.
Read More
Praise for Tara Clancy’s THE CLANCYS OF QUEENS

“The Clancys of Queens overflows with buoyant exuberance…[and] much of its magic lies in its narrator’s frank, funny voice and evident passion for a good story…. [It’s] a winningly sunny tribute to the strong ties of kinship…[and] Clancy has the literary prowess to do it justice.”
–Elle


“The oddities of Clancy’s upbringing make for some hilarious passages, but each chapter also forms a love letter—to her parents, Grandma Rosalie, Mark, her friends and lovers…. A breezy, funny memoir with a wonderful cast of characters and a terrific sense of place.”
–BookPage

“Clancy’s keen observational humor and authentic working-class New Yawkese survive the transition from stage to page as she crafts a love letter to the family that raised her…Clancy sketches these people with telling details and great affection…That Clancy’s personal chronicle is not the bright shiny output of the memoir industrial complex is somewhat of a relief; instead we get an anthropological report of a disappearing world of white, ethnic, working-class New Yorkers, and we hear from working-class women who are often silent in literature.”
–The Rumpus

“Hilarious, inspiring, and that rarest of animals—a memoir full of honest good cheer…. [Clancy] writes with the confidence of a practiced raconteur….[Her life is] exceptional in its realness and resilience, and tremendous in the telling.”
—Lambda Literary

“Tara Clancy delivers a memoir with warmth, truth and chutzpah that makes The Clancys of Queens a fun read. She finds the heart and life that epitomize Queens in a way that will delight both New Yorkers and outsiders alike…Clancy not only does a beautiful job rendering the different stages on which she lived her childhood, but also excels at emphasizing the dissonance between them…Clancy offers a lighthearted look at growing up among the salt-of-the-earth in America, and The Clancys of Queens does what all good memoirs do: It begins from the unique situation of a life and fans out to reveal the feelings we all share.”
—Bookreporter.com

“An intimate coming-of-age chronicle...[from] a sharp-tongued, hip-hop-loving sneaker enthusiast whose relentless attempts at disrupting the tranquility of nearly every situation make up the bulk of the antics in the book's 21-year sprawl... The heart of Clancy’s thoroughly enjoyable narrative lies in her examination of life in the spaces between social classes, and the threads of humanity shared equally by the local pothead high schoolers, antique-collection Hamptons businessmen, and the Irish-American cops of New York City.”
—Publishers Weekly

“In this laugh-out-loud memoir…Clancy’s writing crackles with wit and candor…. As Clancy whirls with feverish tomboy energy from one escapade to the next, she gives a fantastically vivid view into her many worlds.”
—Booklist


“Clancy's story will strike a nerve…funny and touching.”
—Kirkus Reviews

“The fierce voices of working class women are too often inaudible in our top-down social economy, but when Tara Clancy breaks through, she dazzles us with authenticity, hilarity, and insight.  The relentless honesty of her book will capture your heart.”
—Andrew Solomon, author of Far from the Tree


“This memoir is blessed by a narrating voice of such vivid originality the reader cannot help but relish the life it details.”
—Vivian Gornick, author of The Odd Woman and the City


“Real people’s stories are more interesting than fiction because real American life is full of weird connections, from city to country, from Queens to Montana, from high-class to low-class, from straight world to underworld. Ms. Clancy’s rambunctious memoir is a buster of artificial barriers. She goes global, widening the mind. Her setting—the Byzantium of Queens—is the place to do it. I love this memoir for its brash heroine, her bracing voice, her love of her father, her unquiet soul, and the social history she gives of a violent, energetic, fast-evolving world—which is bigger than most people can imagine.”
—Atticus Lish, author of Preparation for the Next Life


“Tara Clancy's freewheeling memoir is a refreshing look at New York City, one that crosses many bridges: the ones between boroughs and the ones between social classes. The Clancys of Queens is one woman's story, but it also captures the vitality and sense of possibility of the city.”
—Elliott Holt, author of You Are One of Them


“Tara Clancy is my new favorite bad ass. The Clancys of Queens is a hilarious love letter to my favorite city and to working class families everywhere.”
—Stephen Adly Guirgis, Pulitzer Prize-winning playwright of Between Riverside and Crazy


“I’d been introduced to Tara Clancy by her stories on The Moth, but I was innocent of the joys of her prose. In The Clancys of Queens, indelible moments tumble upon moments even more memorable until they form a blissful cascade as she recounts a New York City childhood that teeters from hardscrabble to posh. I defy you not smile for the length of this book! I loved it.”
—Jon Cryer, actor and author of So That Happened
Read More

Connecting with The Clancys of QueensThis Is The Author | Tara Clancy