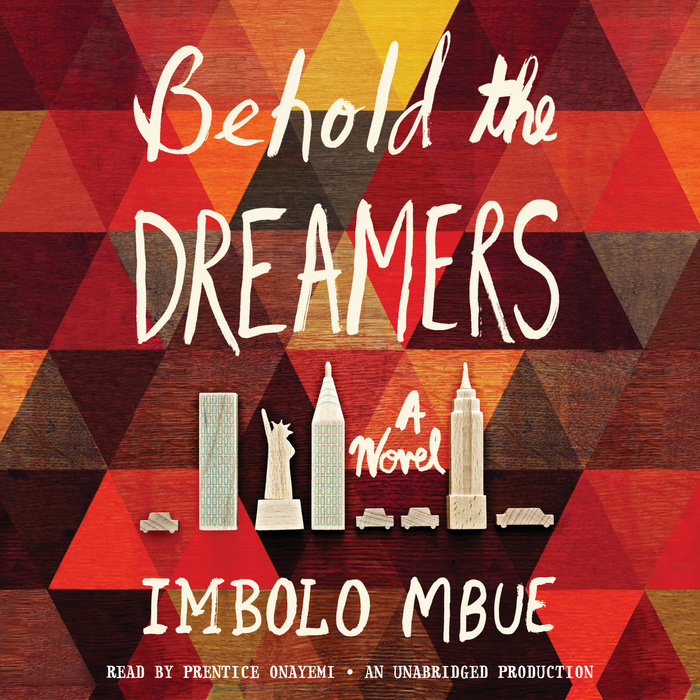 Jende Jonga, a Cameroonian immigrant living in Harlem, has come to the United States to provide a better life for himself, his wife, Neni, and their six-year-old son. In the fall of 2007, Jende can hardly believe his luck when he lands a job as a chauffeur for Clark Edwards, a senior executive at Lehman Brothers. Clark demands punctuality, discretion, and loyalty—and Jende is eager to please. Clark’s wife, Cindy, even offers Neni temporary work at the Edwardses’ summer home in the Hamptons. With these opportunities, Jende and Neni can at last gain a foothold in America and imagine a brighter future.

However, the world of great power and privilege conceals troubling secrets, and soon Jende and Neni notice cracks in their employers’ façades.

When the financial world is rocked by the collapse of Lehman Brothers, the Jongas are desperate to keep Jende’s job—even as their marriage threatens to fall apart. As all four lives are dramatically upended, Jende and Neni are forced to make an impossible choice.

Praise for Behold the Dreamers

“A debut novel by a young woman from Cameroon that illuminates the immigrant experience in America with the tenderhearted wisdom so lacking in our political discourse . . . Mbue is a bright and captivating storyteller.”—The Washington Post

“Behold the Dreamers’ heart . . . belongs to the struggles and small triumphs of the Jongas, which Mbue traces in clean, quick-moving paragraphs.”—Entertainment Weekly

“Mbue’s writing is warm and captivating.”—People (book of the week)

“[Mbue’s] book isn’t the first work of fiction to grapple with the global financial crisis of 2007–2008, but it’s surely one of the best. . . . It’s a novel that depicts a country both blessed and doomed, on top of the world, but always at risk of losing its balance. It is, in other words, quintessentially American.”—NPR

“This story is one that needs to be told.”—Bust

“Behold the Dreamers challenges us all to consider what it takes to make us genuinely content, and how long is too long to live with our dreams deferred.”—O: The Oprah Magazine

“A witty, compassionate, swiftly paced novel that takes on race, immigration, family and the dangers of capitalist excess.”—St. Louis Post-Dispatch

“Mbue [is] a deft, often lyrical observer. . . . [Her] meticulous storytelling announces a writer in command of her gifts.”—Minneapolis Star Tribune
Read More
“As a dissection of the American Dream, Imbolo Mbue’s first novel is savage and compassionate in all the right places.”—The New York Times

“A fresh, engaging entry into the eternally evolving narrative of what it means to be an American—and how human beings, not laws or dogma, define liberty.”—Entertainment Weekly

“Even as Behold the Dreamers takes some dark, vicious turns, it never feels cheaply cynical, grounded as it is in the well-imagined characters who try, through whatever means possible, to protect their families and better their lives.”—USA Today

“Imagine Lorraine Hansberry’s play/film A Raisin in the Sun with a Cameroonian cast of characters in early twenty-first century New York City, and you may come up with something close to Behold the Dreamers, a poignant and bittersweet debut.”—San Francisco Chronicle

“Behold the Dreamers . . . just might be the most accessible novel I’ve ever read. . . . Mbue does an admirable job of developing characters whose lives seem so heartbreakingly real that the pages of this book often seem like something of a confinement. When you close the book, you will hear their pain. You might feel them calling for you.”—Los Angeles Review of Books

“The Help meets House of Cards meets the read that’ll make you forget all about your morning commute.”—theSkimm

“Undocumented immigration, the widening gulf between rich and poor, and the thinly veiled racism of an avowedly ‘post-racial’ culture converge in this new generation of immigrants’ painful encounter with the American Dream. . . . The prose grows luminous.”—The Christian Science Monitor

“Mbue’s outsider’s perceptions of American life—its stresses, its excesses—are sharp. . . . She’s also shrewd on the disruptions that come with the Jongas leaving their native land for a dream that may be a delusion.”—The Seattle Times

“An utterly unique novel about immigration, race, and class—and an important one, as well.”—BookPage

“A debut novel by a young woman from Cameroon that illuminates the immigrant experience in America with the tenderhearted wisdom so lacking in our political discourse.”—The Washington Post

“Mbue writes with great confidence and warmth. . . . There are a lot of spinning plates and Mbue balances them skillfully, keeping everything in motion. . . . Behold the Dreamers is a capacious, big-hearted novel.”—The New York Times Book Review

“Mbue’s writing is warm and captivating.”—People (book of the week)

“Mbue is a wonderful writer with an uncanny ear for dialogue—there are no false notes here, no narrative shortcuts, and certainly no manufactured happy endings. It’s a novel that depicts a country both blessed and doomed, on top of the world, but always at risk of losing its balance. It is, in other words, quintessentially American.”—NPR

“Mbue’s masterful debut about an immigrant family struggling to obtain the elusive American Dream in Harlem will have you feeling for each character from the moment you crack it open.”—In Style

“This story is one that needs to be told.”—Bust

“Behold the Dreamers challenges us all to consider what it takes to make us genuinely content, and how long is too long to live with our dreams deferred.”—O: The Oprah Magazine

“[A] beautiful, empathetic novel . . . Mbue’s narrative energy and sympathetic eye soon render . . . commonplace ingredients vivid, complex, and essential. . . . At once critical and hopeful, Behold the Dreamers traces the political and economic systems that push individuals toward dishonesty, while also acknowledging the bad and affirming the good in their complicated personal choices.”—The Boston Globe

“A witty, compassionate, swiftly paced novel that takes on race, immigration, family and the dangers of capitalist excess. In her debut novel, Mbue has crafted a compelling view of twenty-first-century America.”—St. Louis Post-Dispatch

“Behold the Dreamers reveals Mbue as a deft, often lyrical observer. . . . [Her] meticulous storytelling announces a writer in command of her gifts, plumbing the desires and disappointments of our emerging global culture.”—Minneapolis Star Tribune

“A revelation . . . Mbue has written a clever morality tale that never preaches but instead teaches us the power of integrity.”—Essence

“At once a sad indictment of the American dream and a gorgeous testament to the enduring bonds of family, Mbue’s powerful first novel will grip and move you right up to its heartfelt ending.”—Shelf Awareness

“Mbue proves herself a clear-eyed, unflinching storyteller, and Behold the Dreamers is a fearless, head-on journey into the thorny contemporary issues of American exceptionalism.”—Interview Magazine

“At once an ode to New York City and an elegy for the American Dream, Behold the Dreamers reads like a film, shuttling effortlessly between a Cameroonian chauffeur’s Harlem and an investment banker’s Upper East Side. . . . There are no heroes in this marvelous debut, only nuanced human beings. A classic tale with a surprise ending, as deeply insightful as it is entertaining.”—Taiye Selasi, author of Ghana Must Go

“Mbue’s fantastic debut is much more than an immigrant story, a tale of the 2007 financial collapse, or the intersections of the rich and poor in New York—it’s about how the American Dream can fail anyone, and whether hope can survive. An empathetic, timely, and deeply welcome novel.”—J. Ryan Stradal, author of Kitchens of the Great Midwest

“Eminently readable, deeply empathetic, and often humorous, Behold the Dreamers offers the stark reality of the American Dream as we rarely see it in fiction. In its pages, Americans are made, fortunes are won and lost, and America’s flawed dream-makers and its striving dreamers clash and come alive. With forthright prose and unforgettable characters, Behold the Dreamers is a subversive delight.”—Shawna Yang Ryan, author of Green Island

“Imbolo Mbue would be a formidable storyteller anywhere, in any language. It’s our good luck that she and her stories are American.”—Jonathan Franzen, National Book Award–winning author of Purity and Freedom

“Dazzling, fast-paced, and exquisitely written, Behold the Dreamers is one of those rare novels that will change the way you see the world. Imbolo Mbue is a breathtaking talent.”—Christina Baker Kline, #1 New York Times bestselling author of Orphan Train

“Who is this Imbolo Mbue and where has she been hiding? Her writing is startlingly beautiful, thoughtful, and both timely and timeless. She’s taking on everything from family to the Great Recession to immigration while deftly reminding us what it means to truly believe in ‘the American Dream.’”—Jacqueline Woodson, National Book Award–winning author of Brown Girl Dreaming and Another Brooklyn

“It’s rare that a book is so fascinating, so emotionally compelling, and so beautiful that I literally can’t put it down. I picked Behold the Dreamers up one evening before bed. I turned the last page at dawn. It ruined the next day for me—I wasn’t much good for anything but a nap—but it was worth every lost hour.”—Ayelet Waldman, New York Times bestselling author of Love and Treasure

“A beautiful book about one African couple starting a new life in a new land, Behold the Dreamers will teach you as much about the promise and pitfalls of life in the United States as about the immigrants who come here in search of the so-called American dream.”—Sonia Nazario, author of Enrique’s Journey and winner of the Pulitzer Prize

“Among the spate of novels forged in the crucible of the previous decade, Mbue’s impressive debut deserves a singular place. . . . Realistic, tragic, and still remarkably kind to all its characters, this is a special book.”—Kirkus Reviews (starred review)

“A fast-paced, engaging read with an interesting cross-cultural background.”—Library Journal

“The Jongas are . . . vivid, and the book’s unexpected ending—and its sharp-eyed focus on issues of immigration, race, and class—speak to a sad truth in today’s cutthroat world: the American dream isn’t what it seems.”—Publishers Weekly
Read More 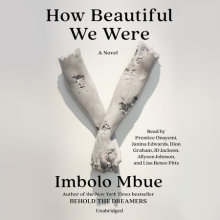