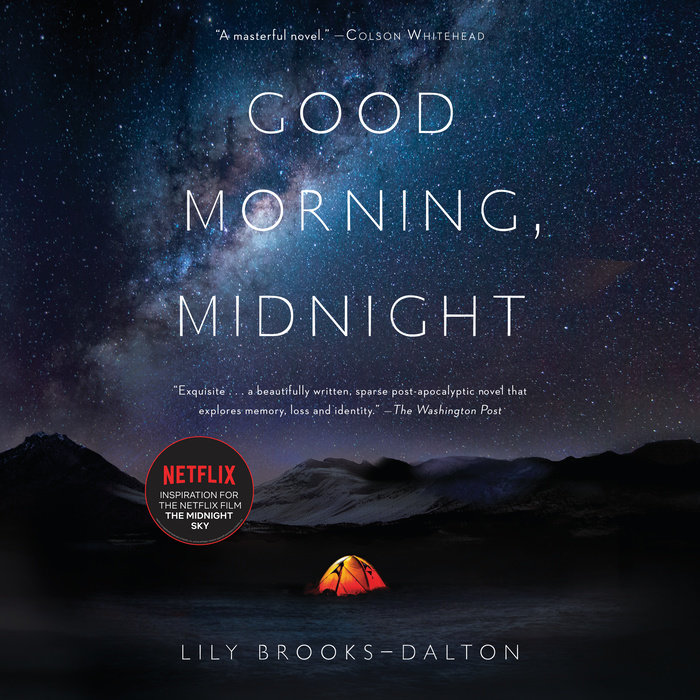 “A remarkable and gifted debut novel” (Colson Whitehead) about two outsiders—a lonely scientist in the Arctic and an astronaut trying to return to Earth—as they grapple with love, regret, and survival in a world transformed.

THE INSPIRATION FOR THE NETFLIX ORIGINAL FILM THE MIDNIGHT SKY, DIRECTED BY AND STARRING GEORGE CLOONEY

Augustine, a brilliant, aging astronomer, is consumed by the stars. For years he has lived in remote outposts, studying the sky for evidence of how the universe began. At his latest posting, in a research center in the Arctic, news of a catastrophic event arrives. The scientists are forced to evacuate, but Augustine stubbornly refuses to abandon his work. Shortly after the others have gone, Augustine discovers a mysterious child, Iris, and realizes that the airwaves have gone silent. They are alone.

At the same time, Mission Specialist Sullivan is aboard the Aether on its return flight from Jupiter. The astronauts are the first human beings to delve this deep into space, and Sully has made peace with the sacrifices required of her: a daughter left behind, a marriage ended. So far the journey has been a success. But when Mission Control falls inexplicably silent, Sully and her crewmates are forced to wonder if they will ever get home.

As Augustine and Sully each face an uncertain future against forbidding yet beautiful landscapes, their stories gradually intertwine in a profound and unexpected conclusion. In crystalline prose, Good Morning, Midnight poses the most important questions: What endures at the end of the world? How do we make sense of our lives? Lily Brooks-Dalton’s captivating debut is a meditation on the power of love and the bravery of the human heart.

“Stunningly gorgeous . . . The book contemplates the biggest questions—What is left at the end of the world? What is the impact of a life’s work?”—Portland Mercury

“Stunningly gorgeous . . . The book contemplates the biggest questions—What is left at the end of the world? What is the impact of a life’s work?”—Portland Mercury

“Slim but ambitious . . . an astute exploration of the ways that human beings develop in isolation. In Good Morning, Midnight, Brooks–Dalton writes beautifully about ambition, loss, grief, and, most compellingly, what it means to love and be loved. The novel moves nimbly between genres, flawlessly combining mystery, science fiction and the classic adventure story to form a truly literary novel that takes places in a society not so different from our own. With intricate multifaceted characters and an emotionally harrowing plot, Brooks-Dalton delivers a profound meditation on human connection.”—Fredricksburg Free Lance-Star

“It takes a brave writer to leave the biggest questions unanswered, but Brooks-Dalton handles her unpulled threads masterfully. . . . We tend to think of the end of the world as a bombastic event, massive and rife with destruction. Good Morning, Midnight gives us a different look. . . . Technically, this could be considered a post-apocalyptic story, but the truth is that Brooks-Dalton has created something much more poignant. . . .  Powerful and moving, Good Morning, Midnight is an exceptional example of the literary power of speculative fiction.”—The Maine Edge

“Ambitious . . . Brooks-Dalton’s prose lights up the page in great swathes, her dialogue sharp and insightful, and the high-concept plot drives a story of place, elusive love, and the inexorable yearning for human contact. . . . Memorable characters explore complex questions that resonate with the urgency of a glimpse into the void.”—Publishers Weekly

“Beautiful descriptions create a sense of wonder and evoke feelings of desolation. . . . Brooks-Dalton’s heartfelt debut novel unfolds at a perfect pace as it asks readers what will be left when everything in the world is gone.”—Booklist

“Good Morning, Midnight is a remarkable and gifted debut novel. Lily Brooks-Dalton is an uncanny chronicler of desolate spaces, whether it’s the cold expanse of the universe or the deepest recesses of the human heart.”—Colson Whitehead

“What does it mean to be isolated from the ordinariness of the everyday world, yet to find the extraordinariness of being close to another human being? With imagination, empathy, and insight into unchanged and unchangeable human nature, Lily Brooks-Dalton takes us on an emotional journey in this beautiful debut.”—Yiyun Li

“A truly original novel, otherworldly and profoundly human . . . This beautiful story reminds us of our deep longing for connection—with those we love, with strangers, with ourselves. We come to understand that, across time and distance, in the face of isolation and emptiness, it is tenderness and communication that keep us tethered to each other. Good Morning, Midnight is a fascinating story, surprising and inspiring at every turn.”—Keith Scribner
Read More