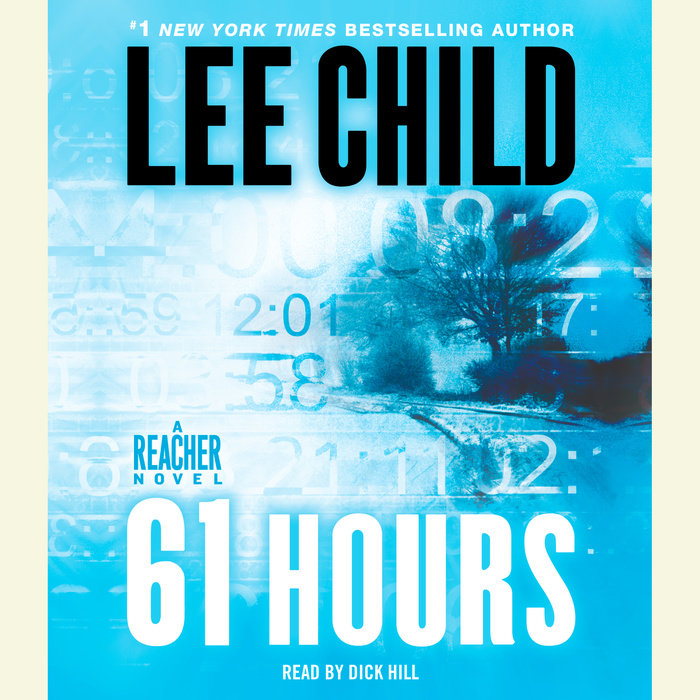 The countdown has begun. Get ready for the most exciting 61 hours of your life. #1 New York Times bestselling author Lee Child’s latest thriller is a ticking time bomb of suspense that builds electric tension on every page.

Sixty-one hours. Not a minute to spare.

A tour bus crashes in a savage snowstorm and lands Jack Reacher in the middle of a deadly confrontation. In nearby Bolton, South Dakota, one brave woman is standing up for justice in a small town threatened by sinister forces. If she’s going to live long enough to testify, she’ll need help. Because a killer is coming to Bolton, a coldly proficient assassin who never misses.

Reacher’s original plan was to keep on moving. But the next 61 hours will change everything. The secrets are deadlier and his enemies are stronger than he could have guessed—but so is the woman whose life he’ll risk his own to save.

In 61 Hours, Lee Child has written a showdown thriller with an explosive ending that readers will talk about for a long time to come.
Read More

"[The] craftiest and most highly evolved of Lee Child’s electrifying Jack Reacher books… The truth about Reacher gets better and better." —The New York Times

"Child is a superb craftsman of suspense, juggling several plots and keeping his herrings well-rouged….Best of all, this is a rare series book that reads like a stand-alone. Everything you need to know about Jack Reacher is contained within its pages. And chances are you'll want to seek out other Reacher adventures the moment you finish." —Entertainment Weekly (A-)

"Jack Reacher is much more like the heir to the Op and Marlowe than Spenser ever was." —Esquire

"As usual, Child's writing is superb. Not only is this thriller believable, but the descriptions of the blizzard will make readers want to hug their furnaces. Fast paced and exciting, this is highly recommended for thriller fans." —Library Journal (starred review)

"Get prepared for teeth-chattering suspense….Child sets up one of his most ingenious plots in the Jack Reacher chronicles. A fiery finale will leave fans talking and speculating for weeks to come." —Madison County Herald

"Child deepens the mystery considerably, providing an explosive climax that will have you tearing out your hair until Reacher's next appearance." —Miami Herald

"Once again, Child spins a riveting, ticking-clock Jack Reacher adventure….It’s guarantees you’ll finish this one in less than 61 hours—and the jolter conclusion will shock and awe you." —Romantic Times Book Review

"Child keeps his foot hard on the throttle...As always, Child delivers enough juicy details about the landscape, the characters, and Reacher’s idiosyncrasies to give the story texture and lower our pulse rates, if only momentarily...This is Child in top form, but isn’t he always?" —Booklist (starred review)