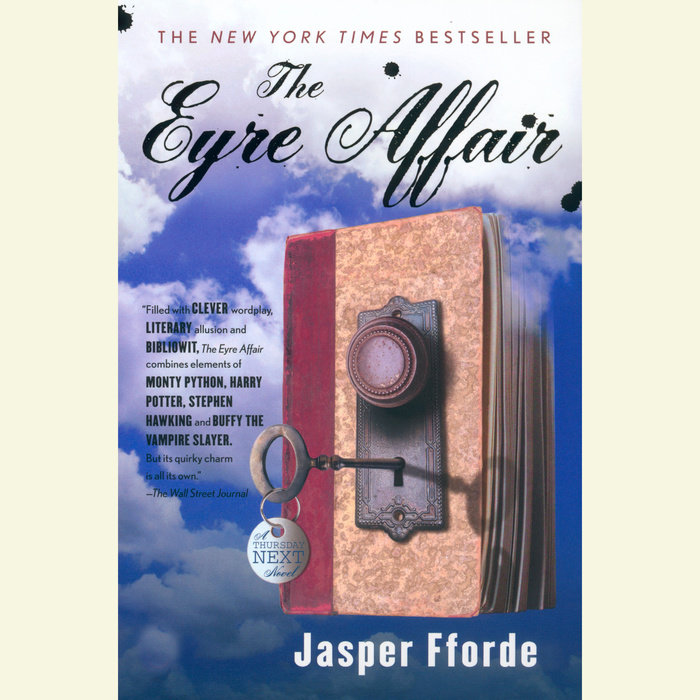 Written by: Jasper Fforde
Read by: Susan Duerden
12 Hours and 14 Minutes Imprint: Penguin Audio Genre: Fiction - Mystery & Detective - Women Sleuths Release Date: December 30, 2009
Alex Award - YALSA
The first in a series of outlandishly clever adventures featuring the resourceful, fearless literary detective Thursday Nextâ€”a New York Times bestseller!In Jasper Fforde's Great Britain, circa 1985, time travel is routine, cloning is a reality (dodos are the resurrected pet of choice), and literature is taken very, very seriously. England is a virtual police state where an aunt can get lost (literally) in a Wordsworth poem and forging Byronic verse is a punishable offense. All this is business as usual for Thursday Next, renowned Special Operative in literary detection. But when someone begins kidnapping characters from works of literature and plucks Jane Eyre from the pages of BrontÃ«'s novel, Thursday is faced with the challenge of her career. Fforde's ingenious fantasyâ€”enhanced by a Web site that re-creates the world of the novelâ€”unites intrigue with English literature in a delightfully witty mix.
Read More

“Delightfully clever . . . Filled with clever wordplay, literary allusion and bibliowit, The Eyre Affair combines elements of Monty Python, Harry Potter, Stephen Hawking and Buffy the Vampire Slayer, but its quirky charm is all its own.”
—The Wall Street Journal

“Jasper Fforde’s first novel, The Eyre Affair, is a spirited sendup of genre fiction—it’s part hardboiled mystery, part time-machine caper—that features a sassy, well-read ‘Special Operative in literary detection’ named Thursday Next, who will put you more in mind of Bridget Jones than Miss Marple.  Fforde delivers almost every sentence with a sly wink, and he’s got an easy way with wordplay, trivia, and inside jokes. . . . Fforde’s verve is rarely less than infectious.”
—The New York Times Book Review

“Jasper Fforde’s genre-busting, whoppingly imaginative first novel, The Eyre Affair, is packed with literary allusions . . . .Thanks to Fforde’s terrific imagination, this definitely will not be the winter of our discontent.”
—The Miami Herald

“For sheer inventiveness his book is hard to beat. The Eyre Affair is an exuberant mélange of crime, comedy and alternative history.”
—Houston Chronicle

“The Eyre Affair by Jasper Fforde could hardly be more delightful. . . . It takes a bold adventurer to play fast and loose with literature, and that’s what we have in Thursday Next and Fforde.”
—Newsday

“[Fforde] delivers multiple plot twists, rampant literary references and streams of wild metafictional invention in a novel that places literature at the center of the pop-cultural universe. . . . It all adds up to a brainy, cheerfully twisted adventure.”
—Time Out New York

“Her name is Next. Thursday Next. And her story is as amusing and intriguing as the summary of her story told within the pages of The Eyre Affair. Next is a literary detective in a world so enamored with the written world that Shakespeare’s Richard III is staged nightly as if it were The Rocky Horror Picture Show . . . . The novel’s writing flows and the imaginative twists and turns in Next’s world are handled smoothly.”
—Sun-Sentinel

'Always ridiculous, often hilarious ... blink and you miss a vital narrative leap. There are shades of Douglas Adams, Lewis Carroll, 'Clockwork Orange' and '1984'. And that's just for starters' - Time Out London

"What Fforde is pulling is a variation on the classic Monty Python gambit: the incongruous juxtaposition og low comedy and high erudition - this scam has not been pulled off with such off-hand finesse and manic verve since the Pythons shut up shop. 'The Eyre Affair' is a silly book for smart people: postmodernism played as raw, howling farce"― Independent (London)