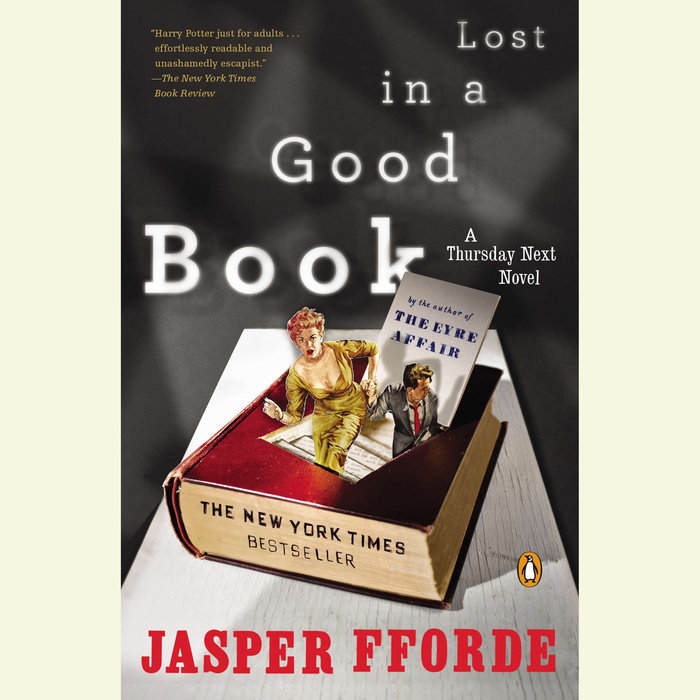 The inventive, exuberant, and totally original literary fun that began with The Eyre Affair continues with New York Times bestselling author Jasper Fforde’s magnificent second adventure starring the resourceful, fearless literary sleuth Thursday Next. When Landen, the love of her life, is eradicated by the corrupt multinational Goliath Corporation, Thursday must moonlight as a Prose Resource Operative of Jurisfiction—the police force inside the BookWorld. She is apprenticed to the man-hating Miss Havisham from Dickens’s Great Expectations, who grudgingly shows Thursday the ropes. And she gains just enough skill to get herself in a real mess entering the pages of Poe’s “The Raven.” What she really wants is to get Landen back. But this latest mission is not without further complications.

Along with jumping into the works of Kafka and Austen, and even Beatrix Potter’s The Tale of the Flopsy Bunnies, Thursday finds herself the target of a series of potentially lethal coincidences, the authenticator of a newly discovered play by the Bard himself, and the only one who can prevent an unidentifiable pink sludge from engulfing all life on Earth. It’s another genre-bending blend of crime fiction, fantasy, and top-drawer literary entertainment for fans of Douglas Adams and P. G. Wodehouse. Thursday’s zany investigations continue with The Well of Lost Plots.
Read More
“Enchanting . . . a tale to savor. Harry Potter fans outgrowing Hogwarts should dive in.”
—People

“Lost [in a Good Book] is even more richly crammed with jokes, ideas and action. Brainier silliness is hard to find. A-.”
—Entertainment Weekly

“Fforde [has a] head-spinning narrative agility. His novel is satire, fantasy, literary criticism, thriller, whodunit, game, puzzle, joke, postmodern prank and tilt-a-whirl. Okay, maybe Lost in a Good Book is a creature with more than the usual number of feet. But it’s exceptionally light on all of them . . . [Fforde] is irrepressible good company”
—The Washington Post

“Just what the doctor ordered now, in a world under the shadow of war, at the tail end of a long, cold winter . . . Lost in a Good Book resembles whipped cream—as sweet and light as the promise of spring.”
—Salon.com

“Entertainingly surreal. Perhaps even more clever than its predecessor [The Eyre Affair], the new story offers a plot stuffed with enough coincidences and characters to make Dickens proud.”
—Orlando Sentinel

“The book-jumping high jinks continue in Fforde’s equally whimsical Lost in a Good Book . . . its mix of surrealism, satire and adventure proves to be totally absorbing.”
—Time Out New York

“Fforde packs Lost in a Good Book to the rafters with sophisticated literary allusions, numerous interweaving subplots and wildly imaginative details. It’s obvious from the way he leaves things that Fforde has many more adventures in mind for his heroine; and with so many classics to choose from, Thursday will have plenty of allies on her side.”
—The Seattle Times

“If Thursday’s adventures prove nothing else, it is that reading can be wonderfully exciting, a lot of fun, and a welcome, maybe necessary, distraction from our quotidian cares.”
—The Philadelphia Inquirer
Read More