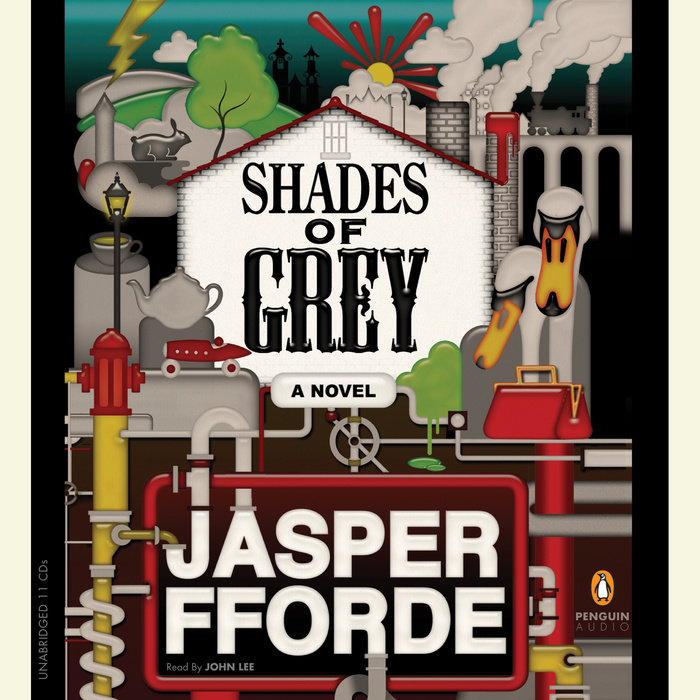 As long as anyone can remember, society has been ruled by a Colortocracy. From the underground feedpipes that keep the municipal park green to the healing hues viewed to cure illness to a social hierarchy based upon one's limited color perception, society is dominated by color. In this world, you are what you can see.

Young Eddie Russett has no ambition to be anything other than a loyal drone of the Collective. With his better-than-average red perception, he could well marry Constance Oxblood and inherit the string works; he may even have enough red perception to make prefect.

But everything changes when he moves with his father, a respected swatchman, to East Carmine. There, he falls in love with a Grey named Jane who opens his eyes to the painful truth behind his seemingly perfect, rigidly controlled society.

Curiosity--a dangerous trait to display in a society that demands total conformity--gets the better of Eddie, who beings to wonder:
Why are there not enough spoons to go around?
Why is everything--and everyone--barcoded?
What happened to all the people who never returned from High Saffron?
And why, when you begin to question the world around you, do black-and-white certainties reduce themselves to shades of grey?

Part satire, part romance, part revolutionary thriller, this is the new world from the creative and comic genius of Jasper Fforde.
Read More
The world of the near future is anything but an ashen wasteland in theimpish British author’s refreshingly daft first volume of a new fantasyseries.

Already cult-worshipped for his popular Thursday Next and NurseryCrimes novels (First Among Sequels, 2007, etc.) Fforde is somethinglike a contemporary Lewis Carroll or Edward Lear. He’s a shamelesspunster with a demonic flair for groan-worthy parodies and lampoons,and it’s just too much bother to try to resist his greased-pignarratives. In this one, which does take place in a possiblypost-apocalyptic world, a repressive Colortocracy ranks and separatescitizens according to their ability to perceive particular colors. Forexample, haughty Greens and dictatorial Yellows (“Gamboges”) deemRed-ness hopelessly lower class. It’s as if 1984 were ruled by CocoChanel. Our hero, Eddie Russett (a Red, naturally), is an affable youngman who hangs out with his father Holden (a healer known as aswatchman), killing time until his arranged marriage to fellow RedConstance Oxblood. But when son and father resettle in the odd littlehamlet of East Carmine, the lad’s eyes are opened to a confusion ofstandards and mores, and the realities of sociopolitical unrest. Whileserving his punishment for a school prank by compiling a “chaircensus,” Eddie visits fascinating new places, enjoys the wonders of theUnLibrary and the organized worship of Oz, and decides thatconscientious resistance to entrenched authority probably won’t bringabout the ultimate ecological catastrophe—Mildew. He’s a little lesssure about his wavering infatuation with Jane, a militant, pissed-offGrey (they’re the proles) who rather enjoys abusing him. Eventually,the best and brightest prosper, while characters of another color endup in the relational red (so to speak).

All this is serenely silly, but to dispel a black mood and chase awaythe blues, this witty novel offers an eye-popping spectrum of remedies.A grateful hue and cry (as well as sequels) may be anticipated.—STARREDKirkus

In Eddie Russett’s world, color is destiny. A person’s perception ofcolor, once tested, determines their rank in the Colortocracy, withprimes ruling “bastard” colors and everyone lording it over theprole-like grays. No one can see more than their own color, and no oneknows why—but there are many unknowns ever since Something Happened,followed by the deFacting and successive Great Leaps Backward. Due toan infraction against the Collective’s rule-bound bureaucracy, Eddie issent to East Carmine, in the Outer Fringes, where manners areshockingly poor, to conduct a month-long chair census. In short order,he falls in love, runs afoul of the local prefects, learns a terriblesecret, and is eaten by a carnivorous tree. This series startercombines the dire warnings of Brave New World and 1984 with thedeevolutionary visions of A Canticle for Leibowitz and Riddley Walker,but, Fforde being Fforde, his dystopia includes an abundance of teashops and a severe shortage of jam varieties. It’s all brilliantlyoriginal. If his complex worldbuilding sometimes slows the plot and thebalance of silly and serious is uneasy, we’re still completely wonover. In our own willful myopia, we sorely need the laughs.—STARRED Booklist
Read More