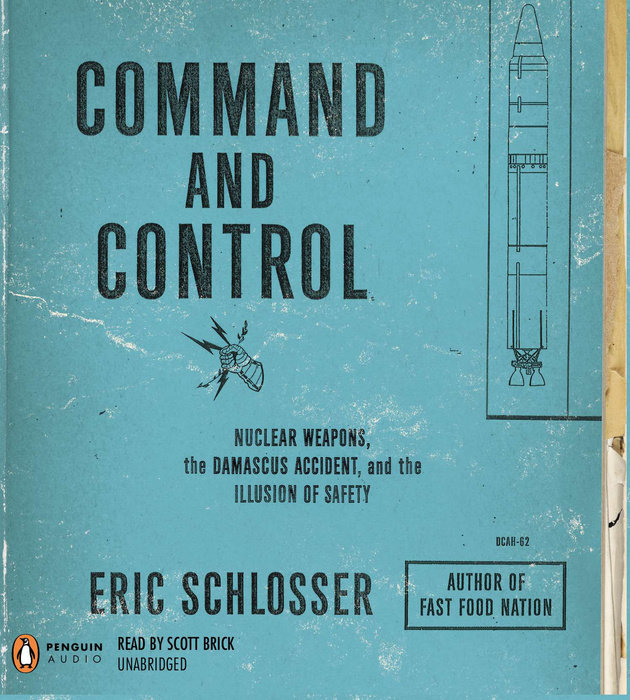 Famed investigative journalist Eric Schlosser digs deep to uncover secrets about the management of America’s nuclear arsenal. A groundbreaking account of accidents, near misses, extraordinary heroism, and technological breakthroughs, Command and Control explores the dilemma that has existed since the dawn of the nuclear age: How do you deploy weapons of mass destruction without being destroyed by them? That question has never been resolved—and Schlosser reveals how the combination of human fallibility and technological complexity still poses a grave risk to mankind. While the harms of global warming increasingly dominate the news, the equally dangerous yet more immediate threat of nuclear weapons has been largely forgotten.

Written with the vibrancy of a first-rate thriller, Command and Control interweaves the minute-by-minute story of an accident at a nuclear missile silo in rural Arkansas with a historical narrative that spans more than 50 years. It depicts the urgent effort by American scientists, policy makers, and military officers to ensure that nuclear weapons can’t be stolen, sabotaged, used without permission, or detonated inadvertently. Schlosser also looks at the Cold War from a new perspective, offering history from the ground up, telling the stories of bomber pilots, missile commanders, maintenance crews, and other ordinary servicemen who risked their lives to avert a nuclear holocaust. At the heart of the book lies the struggle, amid the rolling hills and small farms of Damascus, Arkansas, to prevent the explosion of a ballistic missile carrying the most powerful nuclear warhead ever built by the United States.

Drawing on recently declassified documents and interviews with people who designed and routinely handled nuclear weapons, Command and Control takes readers into a terrifying but fascinating world that, until now, has been largely hidden from view. Through the details of a single accident, Schlosser illustrates how an unlikely event can become unavoidable, how small risks can have terrible consequences, and how the most brilliant minds in the nation can only provide us with an illusion of control. Audacious, gripping, and unforgettable, Command and Control is a tour de force of investigative journalism, an eye-opening look at the dangers of America’s nuclear age.
Read More
***A New York Times Notable Book of 2013***

Jonathan Franzen, The Guardian:
“Schlosser's book reads like a thriller, but it's masterfully even-handed, well researched, and well organised. Either he's a natural genius at integrating massive amounts of complex information, or he worked like a dog to write this book. You wouldn't think the prospect of nuclear apocalypse would make for a reading treat, but in Schlosser's hands it does.”

Associated Press:
“Gripping... A real-life adventure that’s every bit as fascinating as a Tom Clancy thriller... Schlosser is clearly on top of his game with Command and Control. His stories of nuclear near-misses inspire trepidation, and his description of Cold War political machinations provide hints about the conversations Pentagon officials must be having nowadays when they review the country’s war strategies.”

Financial Times:
“Command and Control ranks among the most nightmarish books written in recent years; and in that crowded company it bids fair to stand at the summit. It is the more horrific for being so incontrovertibly right and so damnably readable. Page after relentless page, it drives the vision of a world trembling on the edge of a fatal precipice deep into your reluctant mind... a work with the multilayered density of an ambitiously conceived novel… Schlosser has done what journalism does at its best when at full stretch: he has spent time – years – researching, interviewing, understanding and reflecting to give us a piece of work of the deepest import.”

The Guardian:
“The strength of Schlosser's writing derives from his ability to carry a wealth of startling detail (did you know that security at Titan II missile bases was so lapse you could break into one with just a credit card?) on a confident narrative path.”

San Francisco Chronicle:
"Perilous and gripping… Schlosser skillfully weaves together an engrossing account of both the science and the politics of nuclear weapons safety… The story of the missile silo accident unfolds with the pacing, thrill and techno details of an episode of 24."

The New Yorker:
“An excellent journalistic investigation of the efforts made since the first atomic bomb was exploded, outside Alamogordo, New Mexico, on July 16, 1945, to put some kind of harness on nuclear weaponry. By a miracle of information management, Schlosser has synthesized a huge archive of material, including government reports, scientific papers, and a substantial historical and polemical literature on nukes, and transformed it into a crisp narrative covering more than fifty years of scientific and political change. And he has interwoven that narrative with a hair-raising, minute-by-minute account of an accident at a Titan II missile silo in Arkansas, in 1980, which he renders in the manner of a techno-thriller…Command and Control is how nonfiction should be written.” (Louis Menand)

New York Times Book Review:
“Disquieting but riveting… fascinating… Schlosser’s readers (and he deserves a great many) will be struck by how frequently the people he cites attribute the absence of accidental explosions and nuclear war to divine intervention or sheer luck rather than to human wisdom and skill. Whatever was responsible, we will clearly need many more of it in the years to come.”

Mother Jones:
“Easily the most unsettling work of nonfiction I've ever read, Schlosser's six-year investigation of America's ‘broken arrows’ (nuclear weapons mishaps) is by and large historical—this stuff is top secret, after all—but the book is beyond relevant. It's critical reading in a nation with thousands of nukes still on hair-trigger alert... Command and Control reads like a character-driven thriller as Schlosser draws on his deep reporting, extensive interviews, and documents obtained via the Freedom of Information Act to demonstrate how human error, computer glitches, dilution of authority, poor communications, occasional incompetence, and the routine hoarding of crucial information have nearly brought about our worst nightmare on numerous occasions.”

Dallas Morning News:
“Eric Schlosser’s Command and Control is a sobering and frightening yet fascinating account of the unbelievable peril posed by repeatedly mishandled American nuclear weapons….The tale is riveting from start to finish. In the first few chapters, I found myself so repeatedly astounded by Schlosser’s recounting of accidents in the early 1950s, I thought: Certainly, it can’t get any worse than this. But it kept getting worse—so much so that I started folding the corners of each page that contained what seemed like the most egregious examples of nuclear mishaps and horrors. I now have a 632-page book with roughly a quarter of the pages folded over for reference. Command and Control is truly a monumental, Pulitzer-quality work.”

Bloomberg:
“The book alternates between sections describing the accident with sections on the history of nuclear weapons in the U.S.  Schlosser’s excellent eye for detail, which he displayed in his first book, Fast Food Nation, is also in evidence here....epic pop history."

Lee H. Hamilton, former U.S. Representative; Co-Chair, Blue Ribbon Commission on America’s Nuclear Future; Director, the Center on Congress at Indiana University:
“The lesson of this powerful and disturbing book is that the world’s nuclear arsenals are not as safe as they should be.  We should take no comfort in our skill and good fortune in preventing a nuclear catastrophe, but urgently extend our maximum effort to assure that a nuclear weapon does not go off by accident, mistake, or miscalculation.”
Read More 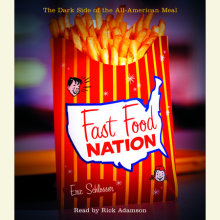