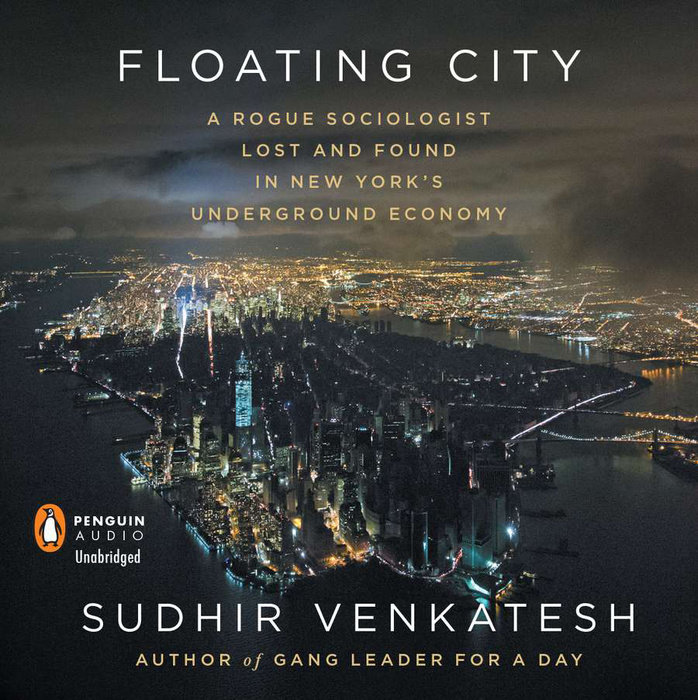 Written by: Sudhir Venkatesh
Read by: Sudhir Venkatesh
8 Hours and 18 Minutes Imprint: Penguin Audio Genre: Biography & Autobiography - Social Scientists & Psychologists Release Date: September 12, 2013
The acclaimed Columbia University sociologist and author of Gang Leader for a Day returns to the streets to connect the dots of New York’s divergent economic worlds and crack the code of the city’s underground economy. Based on Venkatesh’s interviews with prostitutes and socialites, immigrants and academics, high-end drug bosses and street-level dealers, Floating City exposes the underground as the city’s true engine of social transformation and economic prosperity—revealing a wholly unprecedented vision of New York.

A memoir of sociological investigation, Floating City draws from Venkatesh’s decade of research within the affluent communities of Upper East Side socialites and Midtown businessmen, the drug gangs of Harlem and the sex workers of Brooklyn, the artists of Tribeca and the escort services of Hell’s Kitchen. Venkatesh arrived in the city after his groundbreaking research in Chicago, where crime remained stubbornly local: Gangs stuck to their housing projects and criminals stayed on their corners. But in Floating City, Venkatesh discovers that New York’s underground economy unites instead of divides inhabitants: a vast network of “off the books” transactions linking the high and low worlds of the city. Venkatesh shows how dealing in drugs and sex and undocumented labor bridges the conventional divides between rich and poor, unmasking a city knit together by the invisible threads of the underground economy.

Floating City: A Rogue Sociologist Lost and Found in New York’s Underground Economy chronicles Venkatesh’s decade of discovery and loss in the shifting terrain of New York, where research subjects might disappear suddenly and new allies emerge by chance, where close friends might reveal themselves to be criminals of the lowest order. Propelled by Venkatesh’s numerous interviews and firsthand research, Floating City at its heart is a story of one man struggling to understand a complex global city constantly in the throes of becoming.
Read More
New York Magazine:
“If you live in the New York of Shake Shack burgers and business meetings at the W Hotel, you should read Sudhir Venkatesh’s Floating City…. If it’s criminal or iniquitous and happens here, it’s probably to be found in this book.”

The Guardian:
“Compelling…. Like the acclaimed writer Katherine Boo, Venkatesh is interested in deep research, in spending years with subjects and piecing together a detailed portrait. Unlike Boo, Venkatesh is present in his books. He has crossed the line and entered the scene.”

New York Daily News:
“Entire human ecosystems exist undocumented and hidden from view. That Venkatesh can bring them to the surface—if only for brief flashes of their existence—illuminates the worldview of future sociologists, policy-makers, students and citizens.”

Publishers Weekly (starred):
"[A] fascinating X-ray of the city...Venkatesh's engrossing narrative dissects the intricacies of illegal commerce and the subtle ways it both divides and entwines different classes and races, while painting rich, novelistic portraits of its participants and their dreams of self-reinvention."

Kirkus Reviews:
“Venkatesh displays a piercing sense of empathy and ability to translate dry sociological principles into an understanding of the difficult lives of the urban poor....[He] has established a singular voice in urban sociology, and his immersive research and insights remain penetrating and unique.”

Library Journal:
“Venkatesh has a talent for transforming ethnographic observations into character-driven accounts. [Floating City] is an exciting and compelling work....Readers interested in the daily workings of the illicit economy will be fascinated by the complexities and contradictions of the underground economy that Venkatesh details.”

Booklist:
“Venkatesh brings to life the underground economy of New York, where rich and poor and various ethnicities and backgrounds meet and function while they ‘float.’ An enlightening read.”
Read More