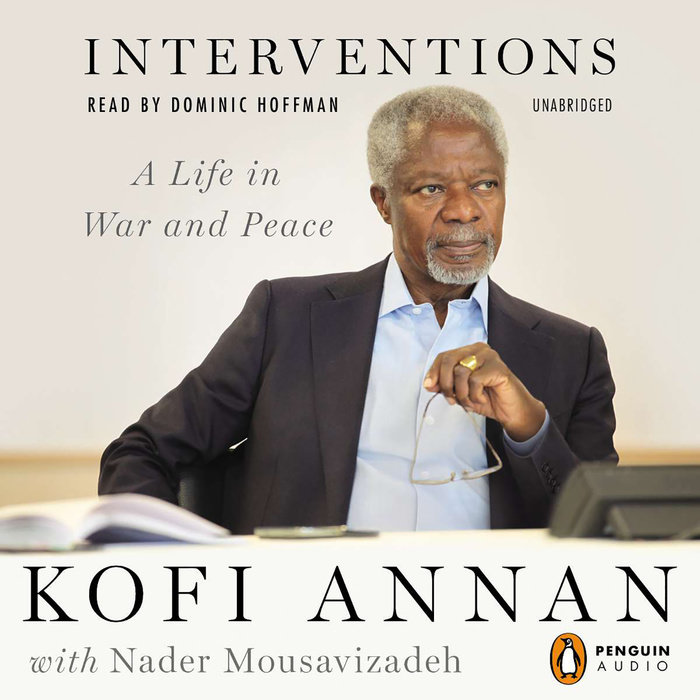 
INTERVENTIONS is the inside story of a world at the brink. After forty years of service in the United Nations, former Secretary-General Kofi Annan shares his unique perspective of the terrorist attacks of September 11; the American invasions of Iraq and Afghanistan; the wars among Israel, Hezbollah, and Lebanon; the humanitarian tragedies of Somalia, Rwanda, and Bosnia; and the geopolitical transformations following the Cold War. With eloquence and unprecedented candor, Annan finally reveals his unique role and unparalleled perspective on decades of global politics.

The first sub-Saharan African national to hold the position of secretary-general, Annan has led an incredible life, an amazing story in its own right. Annan’s idealism and personal politics were forged in the Ghana independence movements of his adolescence, when all of Africa seemed to be waking from centuries of imperial slumber. Schooled in Minnesota, Massachusetts, and Europe, Annan ultimately joined the United Nations in Geneva as the lowest level civil servant in the still young organization. Yet Annan rose rapidly through the ranks, and by the end of the Cold War he was prominently placed in the rapidly changing department of peacekeeping.

As Annan shows the successes of the United Nations around the world, he also reveals the organization’s missed opportunities and ongoing challenges—thwarted actions in the Rwanda genocide, continuing violence between Israelis and Palestinians, the endurance of endemic poverty, and much else. Yet Annan’s great strength in this book is his ability to embed these tragedies within the context of global politics; demonstrating how, time and again, the nations of the world have retreated from the UN’s radical mandate. Ultimately, Annan shows readers a world in which solutions are always available, in which all we lack is the will and courage to see them through.

A personal biography of global statecraft, Annan’s INTERVENTIONS is as much a memoir as it is a guide to world order—past, present, and future.

“Avoiding the nebulous rhetoric of many political memoirs, Annan instead provides a peacemaker’s invaluable perspective on those crises as well as insight into the daunting challenges facing international diplomats in today’s strife-ridden world." --Booklist

“[A] first-hand survey of efforts to attend to the world’s ills, recalling an alphabet of post-Cold War U.N. peace work from Afghanistan to Zimbabwe.” --The Washington Post

“[An] interesting memoir… The accounts related by Annan… are worth every minute spent reading them. Nobody alive can quite match what he has heard and seen. As a bonus, he names names of national rulers and less well-known diplomats. For readers who want to identify heroes and villains, the book provides plenty of material. … With his book as his legacy, perhaps [Annan] will inspire younger individuals to make inroads against  incredible cruelty around the world.” --Christian Science Monitor

“An insider's personal account based on lessons drawn from long experience.” --Kirkus

“In this thought-provoking new memoir, Kofi Annan describes the peaceful and more equitable world that is within our grasp, and offers his candid perspective on the challenges we must overcome to get there. Interventions is a powerful reminder that the United Nations still matters—and must continue to matter if we want our new century to be more free, peaceful and prosperous than the last.”
--President William J. Clinton

“Kofi Annan has been a powerful voice for the poor and a tireless advocate for peace. As a catalyst for international security and human rights, Annan reminds us that we, as a global community, are more alike than different. His life’s work demonstrates what is possible when we focus on the universal values of equality, tolerance and human dignity.”
--Bill Gates

“Kofi Annan is a great global leader of our time. This wonderful book gives the readers a lucid and enjoyable understanding of the kind of reasoning and commitment that has made Annan such a force for good in the troubled world in which we live.”
--Amartya Sen

"Behind the velvet tones of Kofi Annan's dulcet Ghanaian voice, there's a fearsome and fearless iron will, intent on finding solutions to some of the world's biggest problems."
--Bono

“An insightful and candid account of the most defining and complex conflicts and peace deals of the last decades of the 20th century intertwined with the vision and the life journey of one of the most outstanding global leaders of our times. Kofi Annan marks his footprint in history with leadership values in which truth, humility and dignity are the weaving threads.”
-- Graça Machel, founder of the Graça Machel Trust

“Kofi Annan gives a candid, clear and thoughtful account of his successes and failures in one of the world’s most challenging and thankless jobs.”
--Lee Kuan Yew, former prime minister of the Republic of Singapore
Read More