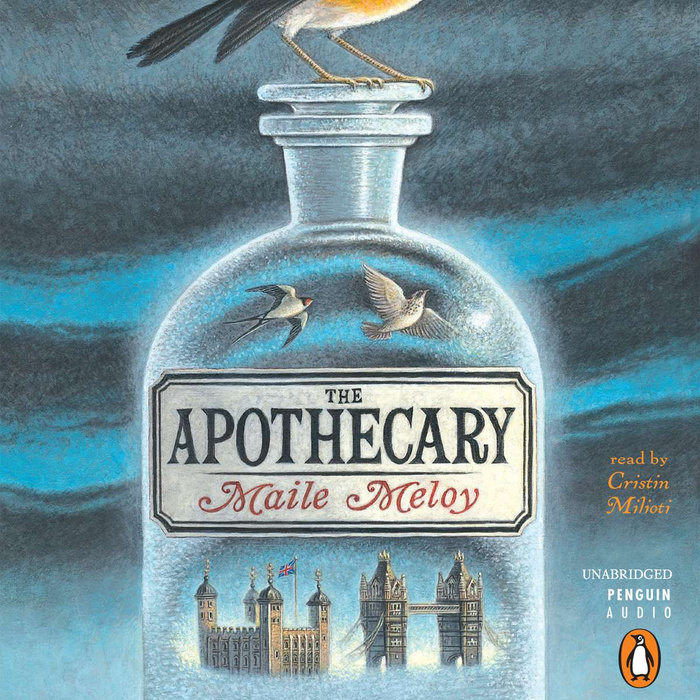 Written by: Maile Meloy
Read by: Cristin Milioti
7 Hours and 36 Minutes Imprint: Listening Library Ages 10 and up Release Date: October 04, 2011
ALSC Notable Children's Recordings
It's 1952 and the Scott family has just moved from Los Angeles to London. Here, fourteen-year-old Janie meets a mysterious apothecary and his son, Benjamin Burrows - a fascinating boy who's not afraid to stand up to authority and dreams of becoming a spy. When Benjamin's father is kidnapped, Janie and Benjamin must uncover the secrets of the apothecary's sacred book, the Pharmacopoeia, in order to find him, all while keeping it out of the hands of their enemies - Russian spies in possession of nuclear weapons. Discovering and testing potions they never believed could exist, Janie and Benjamin embark on a dangerous race to save the apothecary and prevent impending disaster.
Read More
Praise for Maile Meloy’s THE APOTHECARY:


“Inventive, smart and fun, an absolute delight.”
—REBECCA STEAD, Newbery Award-winning author of WHEN YOU REACH ME


FROM THE NEW YORK TIMES BOOK REVIEW:
“[Meloy] brings to her first book for young readers the same emotional resonance that has won acclaim for her adult fiction, grounding her story in the intricacies of family love, friendship and loyalty blended here with the complicated fluctuations of adolescence.”


FROM THE WALL STREET JOURNAL:
“Maile Meloy’s sly commingling of the real and the imaginary make this a witty and entertaining Cold War romp—with a touch of age-appropriate romance.”


FROM USA TODAY:
“The title of Maile Meloy’s smartly written, page-turning adventure/fantasy refers to a magical druggist in London in 1952. . . . It’s for curious readers who, like Meloy’s characters, can make room in their imaginations and ‘allow for the possibilities.’”


FROM BOOKLIST:
“Those who know little about blacklisting, the Cold War, and European life after WWII will just have to dive into the fantasy-adventure pool, which runs long and deep. Magic elixirs, transformational disguises, and everyday cunning help Janie, Benjamin, and several scientists elude capture.”


FROM KIRKUS REVIEWS:
“[I]ts blend of history, culture and the anxiety of the time with magical “science” will keep readers just as spellbound as the characters.”


FROM VOYA:
“[G]ood, strong historical fiction spiced with intrigue, magical realism, mystery, suspense, and science…the spies and historical twist give it a lot of flavor.  The illustrations are fluid and delightful.”
Read More