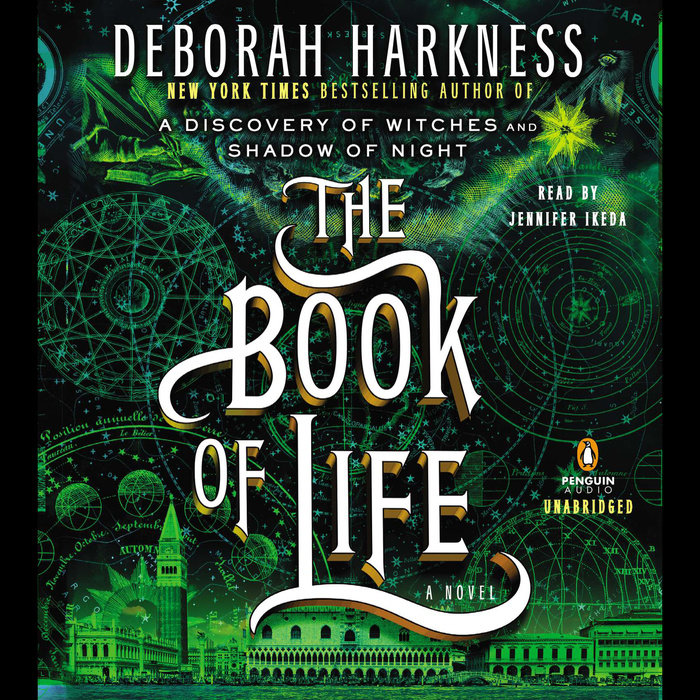 Look for the hit TV series “A Discovery of Witches,” streaming on AMC Plus, Sundance Now and Shudder.

Bringing the magic and suspense of the All Souls Trilogy to a deeply satisfying conclusion, this highly anticipated finale went straight to #1 on the New York Times bestseller list. In The Book of Life, Diana and Matthew time-travel back from Elizabethan London to make a dramatic return to the present—facing new crises and old enemies. At Matthew’s ancestral home, Sept-Tours, they reunite with the beloved cast of characters from A Discovery of Witches—with one significant exception. But the real threat to their future has yet to be revealed, and when it is, the search for Ashmole 782 and its missing pages takes on even more urgency.
Read More
Praise for The Book of Life

“Weaving an extraordinarily rich story of magic and science, history and fiction, passion and power, secrets and truths, Harkness delivers an unforgettable and spellbinding finale that's not to be missed.”—USA Today

“Juicy and action-packed . . . Even at 561 pages, this is one hardcover no one will mind lugging to the beach.”
—People

“The epic and erudite vampire-witch romance comes to a thoroughly satisfying conclusion in the action-packed All Souls trilogy ender.”
—Entertainment Weekly

“A stirring, poignant saga.”
—Us Weekly

“The charm in Deborah Harkness’s wildly successful All Souls trilogy lies not merely in the spells that its creature characters cast as they lurk pretty much in plain sight of humans, but in the adroit way Harkness has insinuated her world of demons, witches, and vampires into ours. . . . From the novel’s poignant opening, Harkness casts her own indelible spell of enchantment, heartbreak, and resilience. . . . She is terrific at bringing her magic world to life, maintaining a fast-paced, page-turning narrative.”
—The Boston Globe

“This trilogy is a superlative example in a subgenre you could call realistic fantasy—think Harry Potter but for grown-ups or Susanna Clarke’s Jonathan Strange & Mr. Norrell. Witches, vampires, and daemons exist, along with time travel. But this world also is recognizably ours, not a wholly made-up setting like George R.R. Martin’s Westeros. When done well, as it is here, this sort of fiction provides characters who are recognizably human in their desires and actions even if most of them are creatures with supernatural powers. Through them Harkness succeeds at the hardest part of writing fantasy: She makes this world so real that you believe it exists—or at the very least that you wish that it did.”
—Miami Herald

“Harkness has immersed and spellbound readers with her alternative universe. . . . Her ambitious melding of scientific and historical detail is inventive and brings surprising depth. . . . The Book of Life brims with sensuality, intrigue, violence and much-welcome humor.”
—Los Angeles Times

“There is no shortage of action in this sprawling sequel, and nearly every chapter brings a wrinkle to the tale. The storytelling is lively and energetic, and Diana remains an appealing heroine even as her life becomes ever more extraordinary. A delightful wrap-up to the trilogy.”
—Publishers Weekly

“Harkness herself proves to be quite the alchemist as she combines elements of magic, history, romance, and science, transforming them into a compelling journey through time, space, and geography. By bridging the gaps between Harry Potter, Twilight, and Outlander fans, Harkness artfully appeals to a broad range of fantasy lovers.”
—Booklist

“The witch Diana’s and the vampire Matthew’s quests to discover their origins and confront the threats to their star-crossed union tie up as neatly as one of Diana’s magical weaver’s knots. . . . It’s still satisfying to travel with these characters toward their more-than-well-earned happy ending.”
—Kirkus Reviews

“The adventure never lets up. . . . History, science, and the unpredictable actions of paranormal characters with hidden agendas all swirl together to create a not-to-be-missed finale to a stellar series.”
—Library Journal
Read More