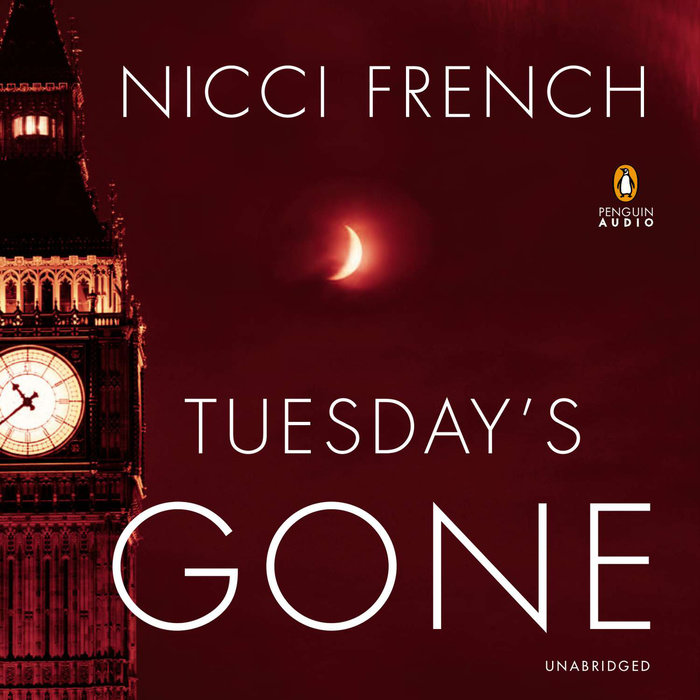 Internationally bestselling authors Nicci Gerard and Sean French, writing as Nicci French, have sold more than eight million copies of their books worldwide. But nothing they’ve written written before has grabbed the attention of reviewers and readers like Blue
Monday and its iconic heroine, Frieda Klein. In a starred review, Publishers Weekly called it a “superb psychological thriller . . . with brooding atmosphere, sustained suspense, a last-minute plot twist, and memorable cast of characters.”

In Tuesday’s Gone, a London social worker makes a routine home visit only to discover her client, Michelle Doyce, serving afternoon tea to a naked, decomposing corpse. With no clues as to the dead man’s identity, Chief Inspector Karlsson again calls upon Frieda for help. She discovers that the body belongs to Robert Poole, con man extraordinaire. But Frieda can’t shake the feeling that the past isn’t done with her yet. Did someone kill Poole to embroil her in the investigation? And if so, is Frieda herself the next victim?

A masterpiece of paranoia, Tuesday’s Gone draws readers inexorably into a fractured and faithless world as it brilliantly confirms Frieda Klein as a quintessential heroine for our times.
Read More
Praise for TUESDAY'S GONE:

"Seamlessly mixes a foreboding tone and deliberate pacing with deft plot twists that should leave readers pleasantly chilled to the bone."
—Publishers Weekly

"Starts as a grim psychological thriller in the vein of Dennis Lehane’s darker novels and turns into a fascinating puzzle in which character analysis holds sway. Highly recommended for fans of psychological suspense who enjoy a complex protagonist."
—Library Journal (starred review)

"The plotting is fast-paced with surprises galore, and characters literally come to life on the pages. . . . When readers are through, they will find themselves waiting impatiently for Wednesday to arrive!"
—Suspense Magazine

"If you are looking for wickedly inventive crime fiction, you need look no further than the writing team of Nicci Gerrard and Sean French . . . Unless you are into tension, paranoia and burning the midnight oil to finish a book, don’t embark on reading Tuesday’s Gone after suppertime!"
—BookPage

"Tuesday’s Gone is one of those great, great books in the mystery genre wherein the more you know, the less you know—peel back one stratum and you cannot shovel fast enough to get into the next, which reveals anything but what you expected. French takes the novel on a number of unexpected twists and turns, not the least of which relates back to BLUE MONDAY, which, as it turns out, didn’t quite end on its last page."
—Bookreporter.com

“Fast-paced and spooky…it leaves readers with the promise of intriguing tales to come.”
—People (****)

“A neat puzzle with a satisfying resolution and a terrific twist at the end.”
—The New York Times Book Review

“[A] superb psychological thriller . . . With its brooding atmosphere, sustained suspense, last-minute plot twist, and memorable cast of characters, this series debut will leave readers eager to discover what color Tuesday will be.”
—Publishers Weekly, starred review

“With its smart plot, crisp prose, and a stunning final twist, this is psychological suspense at its best. Absolutely riveting.”
—Booklist, starred review

“This is psychological suspense done right. The authors pace themselves and build the tension slowly while carefully developing each of the players. For fans of Tana French’s and Lisa Gardner’s moody, dark, twisty thrillers.”
—Library Journal

“Complex and flawed, Frieda Klein is a refreshingly human protagonist, an intriguing debut for a truly unique character.”
—Tami Hoag, bestselling author of Down the Darkest Road

“Unrelenting . . . unnerving . . .  unforgettable. Psychological dynamite.”
—Alan Bradley, bestselling author of The Sweetness at the Bottom of the Pie

“Nicci French creates a haunting and complex psychological puzzle about memory and heredity, with enough twists and turns to keep you guessing until the very end.  This gripping thriller certainly bodes well for the future of the series and I look forward to reading more about unlikely heroine Frieda Klein.”
—Camilla Läckberg, bestselling author of The Ice Princess

“A fabulous, unsettling, and riveting look at motives and memory and relationships. And what drives people to do the unthinkable.”
—Louise Penny, bestselling author of A Trick of the Light