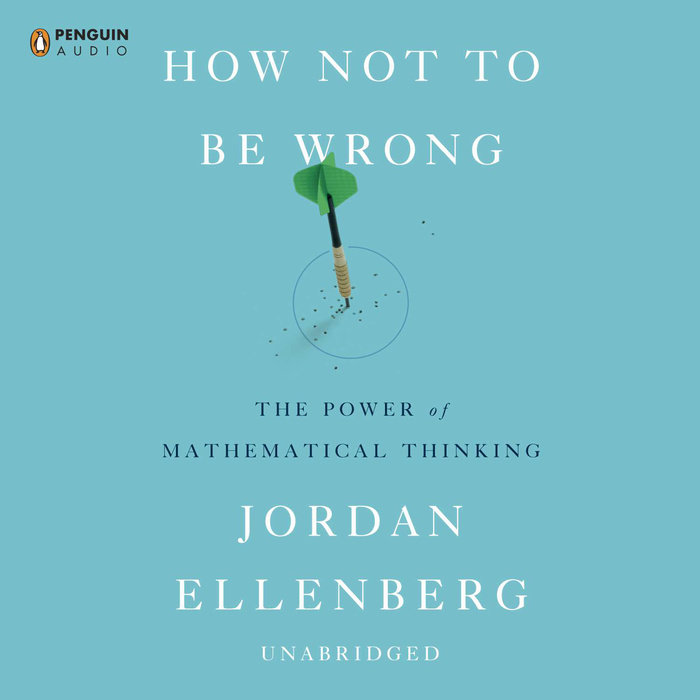 Written by: Jordan Ellenberg
Read by: Jordan Ellenberg
13 Hours and 30 Minutes Imprint: Penguin Audio Genre: Mathematics - Applied Release Date: May 29, 2014
The Freakonomics of math—a math-world superstar unveils the hidden beauty and logic of the world and puts its power in our hands

The math we learn in school can seem like a dull set of rules, laid down by the ancients and not to be questioned. In How Not to Be Wrong, Jordan Ellenberg shows us how terribly limiting this view is: Math isn’t confined to abstract incidents that never occur in real life, but rather touches everything we do—the whole world is shot through with it.

Math allows us to see the hidden structures underneath the messy and chaotic surface of our world. It’s a science of not being wrong, hammered out by centuries of hard work and argument. Armed with the tools of mathematics, we can see through to the true meaning of information we take for granted: How early should you get to the airport? What does “public opinion” really represent? Why do tall parents have shorter children? Who really won Florida in 2000? And how likely are you, really, to develop cancer?

How Not to Be Wrong presents the surprising revelations behind all of these questions and many more, using the mathematician’s method of analyzing life and exposing the hard-won insights of the academic community to the layman—minus the jargon. Ellenberg chases mathematical threads through a vast range of time and space, from the everyday to the cosmic, encountering, among other things, baseball, Reaganomics, daring lottery schemes, Voltaire, the replicability crisis in psychology, Italian Renaissance painting, artificial languages, the development of non-Euclidean geometry, the coming obesity apocalypse, Antonin Scalia’s views on crime and punishment, the psychology of slime molds, what Facebook can and can’t figure out about you, and the existence of God.

Ellenberg pulls from history as well as from the latest theoretical developments to provide those not trained in math with the knowledge they need. Math, as Ellenberg says, is “an atomic-powered prosthesis that you attach to your common sense, vastly multiplying its reach and strength.” With the tools of mathematics in hand, you can understand the world in a deeper, more meaningful way. How Not to Be Wrong will show you how.

Read More
“Brilliantly engaging . . . Ellenberg’s talent for finding real-life situations that enshrine mathematical principles would be the envy of any math teacher. He presents these in fluid succession, like courses in a fine restaurant, taking care to make each insight shine through, unencumbered by jargon or notation. Part of the sheer intellectual joy of the book is watching the author leap nimbly from topic to topic, comparing slime molds to the Bush-Gore Florida vote, criminology to Beethoven’s Ninth Symphony. The final effect is of one enormous mosaic unified by mathematics.” —Manil Suri, The Washington Post

“Easy-to-follow, humorously presented . . . This book will help you to avoid the pitfalls that result from not having the right tools. It will help you realize that mathematical reasoning permeates our lives—that it can be, as Mr. Ellenberg writes, a kind of 'X-ray specs that reveal hidden structures underneath the messy and chaotic surface of the world.'” —Mario Livio, The Wall Street Journal

“Witty, compelling, and just plain fun to read . . . How Not to Be Wrong can help you explore your mathematical superpowers.” —Evelyn Lamb, Scientific American

“A poet-mathematician offers an empowering and entertaining primer for the age of Big Data . . . A rewarding popular math book for just about anyone.” —Laura Miller, Salon

“Mathematicians from Charles Lutwidge Dodgson to Steven Strogatz have celebrated the power of mathematics in life and the imagination. In this hugely enjoyable exploration of everyday maths as 'an atomic-powered prosthesis that you attach to your common sense', Jordan Ellenberg joins their ranks. Ellenberg, an academic and Slate’s ‘Do the Math’ columnist, explains key principles with erudite gusto—whether poking holes in predictions of a US 'obesity apocalypse', or unpicking an attempt by psychologist B. F. Skinner to prove statistically that Shakespeare was a dud at alliteration.” —Nature

“A fresh application of complex mathematical thinking to commonplace events . . . How Not to Be Wrong is beautifully written, holding the reader’s attention throughout with well-chosen material, illuminating exposition, wit and helpful examples. I am reminded of the great writer of recreational mathematics, Martin Gardner: Ellenberg shares Gardner’s remarkable ability to write clearly and entertainingly, bringing in deep mathematical ideas without the reader registering their difficulty.” —Times Higher Education

“The author avoids heavy jargon and relies on real-world anecdotes and basic equations and illustrations to communicate how even simple math is a powerful tool . . . [Ellenberg] writes that, at its core, math is a special thing and produces a feeling of understanding unattainable elsewhere: ‘You feel you’ve reached into the universe’s guts and put your hand on the wire.’ Math is profound, and profoundly awesome, so we should use it well—or risk being wrong . . . Witty and expansive, Ellenberg’s math will leave readers informed, intrigued and armed with plenty of impressive conversation starters.” —Kirkus Reviews

“Readers will indeed marvel at how often mathematics sheds unexpected light on economics (assessing the performance of investment advisors), public health (predicting the likely prevalence of obesity in 30 years), and politics (explaining why wealthy individuals vote Republican but affluent states go for Democrats). Relying on remarkably few technical formulas, Ellenberg writes with humor and verve as he repeatedly demonstrates that mathematics simply extends common sense. He manages to translate even the work of theoretical pioneers such as Cantor and Gödel into the language of intelligent amateurs. The surprises that await readers include not only a discovery of the astonishing versatility of mathematical thinking but also a realization of its very real limits. Mathematics, as it turns out, simply cannot resolve the real-world ambiguities surrounding the Bush-Gore cliff-hanger of 2000, nor can it resolve the much larger question of God’s existence. A bracing encounter with mathematics that matters.” —Booklist

“The title of this wonderful book explains what it adds to the honorable genre of popular writing on mathematics. Like Lewis Carroll, George Gamow, and Martin Gardner before him, Jordan Ellenberg shows how mathematics can delight and stimulate the mind. But he also shows that mathematical thinking should be in the toolkit of every thoughtful person—of everyone who wants to avoid fallacies, superstitions, and other ways of being wrong.” —Steven Pinker, Johnstone Family Professor of Psychology, Harvard University; author of How the Mind Works

“With math as with anything else, there’s smart, and then there’s street smart. This book will help you be both. Fans of Freakonomics and The Signal and the Noise will love Ellenberg’s surprising stories, snappy writing, and brilliant lessons in numerical savvy. How Not to Be Wrong is sharp, funny, and right.” —Steven Strogatz, Schurman Professor of Applied Mathematics, Cornell University, and author, The Joy of x

“Through a powerful mathematical lens Jordan Ellenberg engagingly examines real-world issues ranging from the fetishizing of straight lines in the reporting of obesity to the game theory of missing flights, from the relevance to digestion of regression to the mean to the counter-intuitive Berkson’s paradox, which may explain why handsome men don’t seem to be as nice as not so handsome ones. The coverage is broad, but not shallow and the exposition is non-technical and sprightly.” —John Allen Paulos, author of Innumeracy and A Mathematician Reads the Newspaper

“Jordan Ellenberg is a top mathematician and a wonderful expositor, and the theme of his book is important and timely. How Not to Be Wrong is destined to be a classic.” —Timothy Gowers

“Jordan Ellenberg promises to share ways of thinking that are both simple to grasp and profound in their implications, and he delivers in spades. These beautifully readable pages delight and enlighten in equal parts. Those who already love math will eat it up, and those who don’t yet know how lovable math is are in for a most pleasurable surprise." —Rebecca Newberger Goldstein, author of Plato at the Googleplex

"Brilliant and fascinating! Ellenberg shows his readers how to magnify common sense using the tools usually only accessible to those who have studied higher mathematics. I highly recommend it to anyone interested in expanding their worldly savviness—and math IQ!" —Danica McKellar, actress and bestselling author of Math Doesn’t Suck and Kiss My Math

“How Not to Be Wrong is a cheery manifesto for the utility of mathematical thinking. Ellenberg's prose is a delight—informal and robust, irreverent yet serious. Maths is 'an atomic-powered prosthesis that you attach to your common sense, vastly multiplying its reach and strength,' he writes. Doing maths 'is to be, at once, touched by fire and bound by reason. Logic forms a narrow channel through which intuition flows with vastly augmented force.'” —The Guardian
Read More 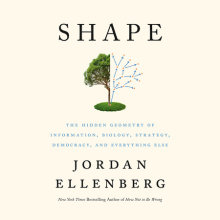 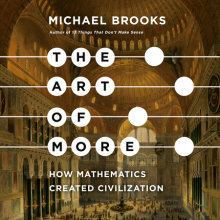 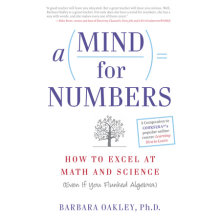 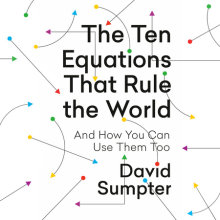